The snow is abating round these parts, but if you are up north or dreaming of the next snow day I suggest you take my crash course in igloo-building. Here’s how to build an igloo in easy steps.

How to make an igloo in Britain

2. Clear a flat space in the snow on the ground and mark out a circle shape, trying to keep it as perfectly round as possible.

3. Make snow blocks by tightly pack snow into your box. Sprinkle a little water on the snow to make it easier to pack it together tightly. Hold the mould and tap the top or sides of it sharply to release the snow block.

4. Form a row of the large blocks around your circle. Make the joints smooth and even. If necessary, force loose snow in to fill up the cracks and crevices as the igloo is built.

5. Form a second layer of the large blocks on top of the first, laying each block above of the joint of the ones underneath, thus staggering the blocks.

6. Stack additional layers on top, each time moving the bricks in slightly so that the walls will dome inward. The first course of the snow blocks should be thicker than the others, and the thickness of the walls gradually decreases toward the top.

7. Cut a cap brick that is close in size, but definitely larger than the hole on top of your igloo.

8. Two people should lift the brick up and set it on top of the igloo.

9. One person should get inside the igloo and trim the cap as needed until it fits snugly into the hole.

10. Fill in the cracks and holes with snow and pack it in as tightly as possible. Smooth out the inner dome walls as much as possible and carve longitudinal grooves inside to allow the melting snow to flow outside without dripping on you.

11. Dig down to make an entrance to the igloo. If you build it on a gentle slope, then the entrance hole can ramp up slightly into the cave. This will allow the cool air to ‘fall out’ through the entrance and the warmer air to stay inside.

12. Strengthen the structure. Drip water over the top of the igloo at night before going to sleep. This will allow the water to freeze and will make the walls stronger. Poke a small hole near the top, and then light a candle inside the igloo and let it burn. The heat from the candle will partially melt the inside of the igloo, and then it will refreeze into ice, making your igloo stronger.

Now the obligatory safety bit!
-It’s best to attempt this with two people, as snow can be heavy.
-Never build a fire inside, unless it is very small, as it is very dangerous due to smoke inhalation and rapidly melting snow. Body heat and adequate clothing will keep you nice and warm inside without a fire. A candle is safer to use.
-Be careful about the air’s oxygen level as most igloos provide poor ventilation.

Here’s one we attempted earlier (notice we are rubbish and didn’t grade the blocks, therefore making more of a… igwall). 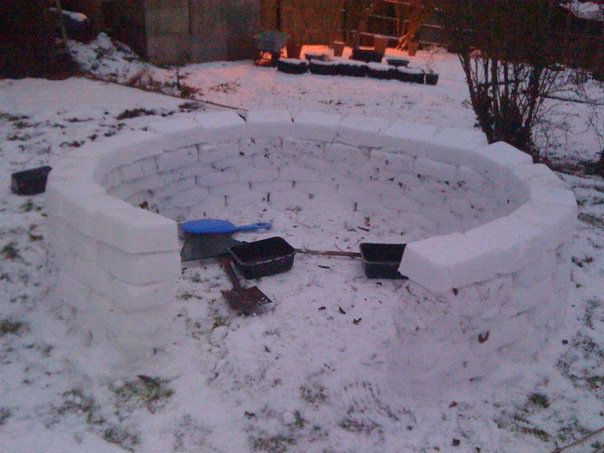 Find tons of other inspiring projects in my How To section