Need some inspiration to get fit and get outdoors? Read my interview with the incredibly inspiring injured soldier who proved the doctors wrong – not only by walking again, but by trekking all the way to the North Pole for charity. 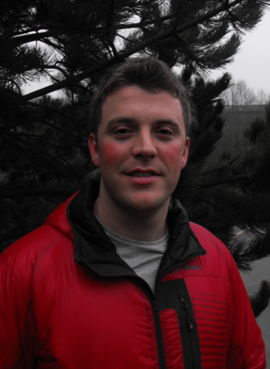 “A big danger are polar bears,” says Sergeant Steve Young happily, “you need to carry shot guns and flare guns. They can come up at night to investigate – I really hope we see one.”

Steve weighs in at 15 stone and looks like he could do some damage in a fight. As the 28 year-old chats about how brilliant it is to be gorging on chocolate to bulk up for his latest adventure, a trek to the North Pole with Prince Harry which will raise more than £2,000,000 for charity, he’s confident, relaxed and easy to talk to. But his forecast hasn’t always been so positive.

Two years ago, after an IED bomb broke his back in Afghanistan, he was told by doctors he’d never walk again. Now he’s attempting a trek through 345 miles of ice and snow to the end of the world, pulling a 100k sled at temperatures of up to -40 degrees.

Steve, from Rhondda in the Welsh valleys, now hopes to raise £2million to help wounded soldiers with the trek with three other injured soldiers, two of whom hope to be the first amputees to make the journey unsupported.

The team has attracted celebrity support – survival expert Bear Grylls said: “I so admire this team and their determination to make a difference. And, boy, they are doing it the hard way.” The expedition will also be joined by Prince Harry, the patron of the charity behind the pole attempt, Walking with the Wounded.

Before recent training in Norway Steve had never skied before in his life. “I’m sure the lads enjoyed my impression of Bambi on ice” he smiles, chatting excitedly about what it was like to be snowed into a tent.
Even when discussing how he was injured he keeps a positive, ‘these things happen’ attitude which is incredibly impressive when you hear the facts.

Two years ago, on the afternoon of 1 August 2009, most of us were probably having a few pints in a beer garden and playing a bit of footie in the park. Steve was in an armoured personnel carrier somewhere in Babaji, Helmand Province, having just concluded Operation Panthers Claw. Only a few weeks before he’d been in a similar vehicle that overturned into a canal, drowning half the men inside – Steve was one of the lucky few to escape the wreckage with minor injuries.

After that he was told to remain at camp for the remainder of his tour, to recover. But sitting still clearly isn’t Steve’s style, and he managed to blag his way into a convoy leaving for Babaji.

“I was pretty stressed, as the last time I’d been in a personnel carrier I’d almost drowned. I was just starting to calm down when the vehicle exploded. A massive cloud of dust engulfed us. I was on the floor and I could hear the other lads screaming. I tried to get up to help and I realised something was wrong – my back hurt a bit.”

This is typical Steve, to describe a broken back as hurting ‘a bit’.

“I tried getting up and couldn’t. I was vomiting from the pain. There was a huge rip in my combats around my crotch and I was covered in blood, so I immediately thought the worst and asked one of the lads to check that everything was, er, intact. The blood was from a few cuts to my buttocks, so I was pretty damn happy about that.”

It took more than an hour to get Steve out of the armoured car, which had been hit by 100kg of explosives. “I remember looking up and seeing an American helicopter hovering above us – they gave me ketamine and after that, I was high as a kite.”

Back at camp, doctors wasted no time in letting Steve know that he’d broken his back and had lost almost all feeling below his belly button – the chances were that he’d never walk again.

Less than 24 hours later, Steve was back in the UK, where he had only marginally better news – he’d walk, but he’d be on crutches for the rest of his life and for the next 18 months he’d be immobile in a spinal bed. Never one to follow orders to the letter, Steve set out to prove them wrong.

“I went from 15 stone to 10 and my muscles wasted away. I was going crazy with boredom but I was exercising and every day I felt a little bit more positive – one night I managed to walk to the windowsill and back and that felt tremendous.” He smiles.

“When I could walk I started four hours of physiotherapy a day, strengthening my core. It was good for me mentally, but it hurt a lot. I was building up slowly – running for 30 seconds, walking for a minute, repeat. It was frustrating but I gave myself goals. I was out of the spinal bed in five months and last year I ran a half marathon in Kenya.”

You’d think most young men would be content with being able to walk again, let alone run, but Steve now has an even bigger ambition – reaching the North Pole.

The expedition has been organised to raise money and awareness of injured amputees. The team will set out from Norway at the end of March to walk for a gruelling month to the end of the world. 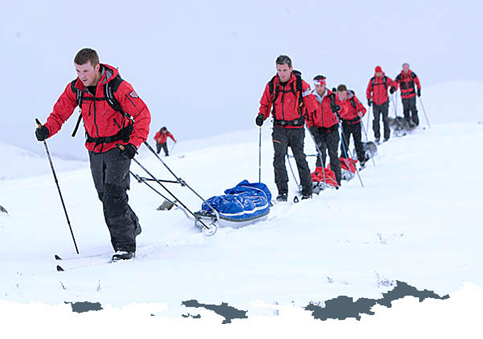 Steve is now in hard training for the trek. “I go tyre pulling every day – dragging huge Dunlops up and down the beach so my back is strong for pulling a sled! I’m also weight training regularly.”

What will the team do when they finally reach the North Pole; a goal Steve has pushed himself towards with two years of rehabilitation, training and determination?

“We’ve been given a bottle of whiskey that was taken by Captain Scott on his expedition 110 years ago. So we’re going to have a nice toast with that!”