In June I spent a week in Israel discovering the delights of Tel Aviv, biking in the Negev Desert and wandering around the labyrinthine streets of old Jerusalem. Here’s part two of the journey – cycling in the desert. Some photos by the fantastic Mark Stratton. 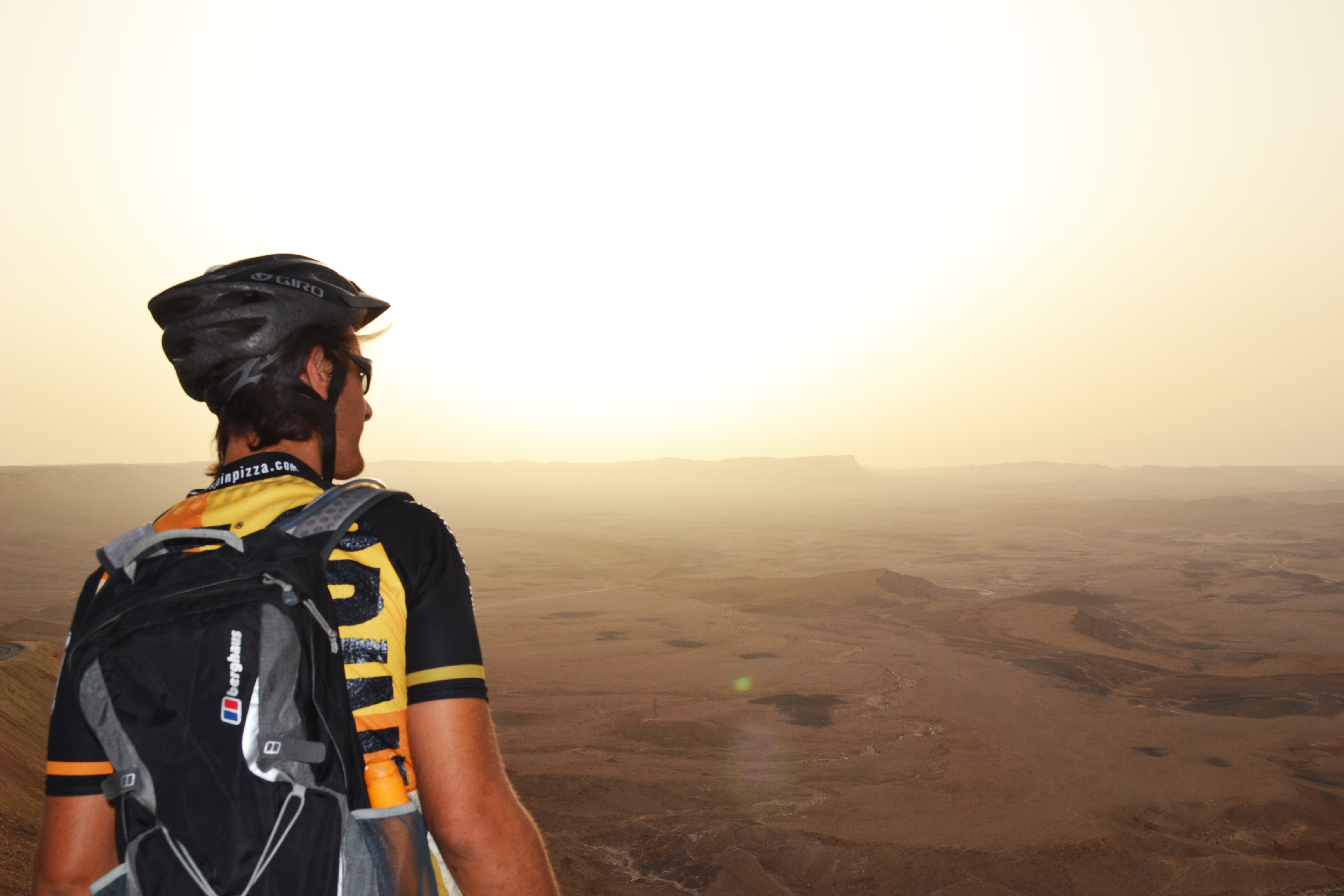 After a lovely gentle introduction to Israeli cycling on the flat boardwalks and city streets of Tel Aviv, I was rather unprepared for day three of our two-wheeled tour, as we headed out to the foothills of the Judean mountains. The countryside itself was beautiful, all tall eucalyptus, swaying cypress and fields of nodding sunflowers, but it. was. insanely. hot. Our lovely guide Chaim was clearly under the impression that shade, water and rest were for wimps, and I spent most of the morning wiping sweat out of my eyes so that I could see where I was going and wondering with a mix of curiosity and terror what the proper desert was going to do to me. 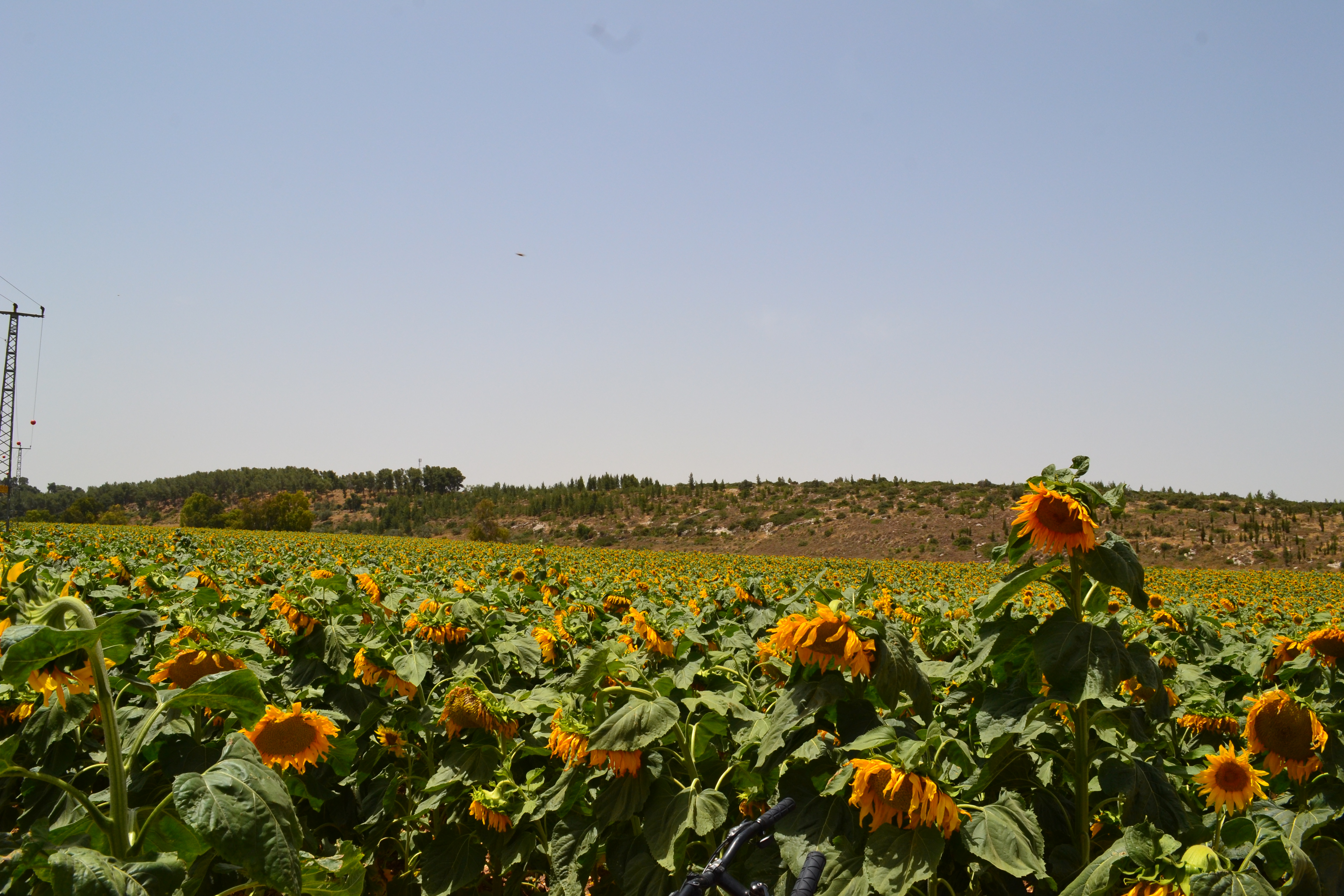 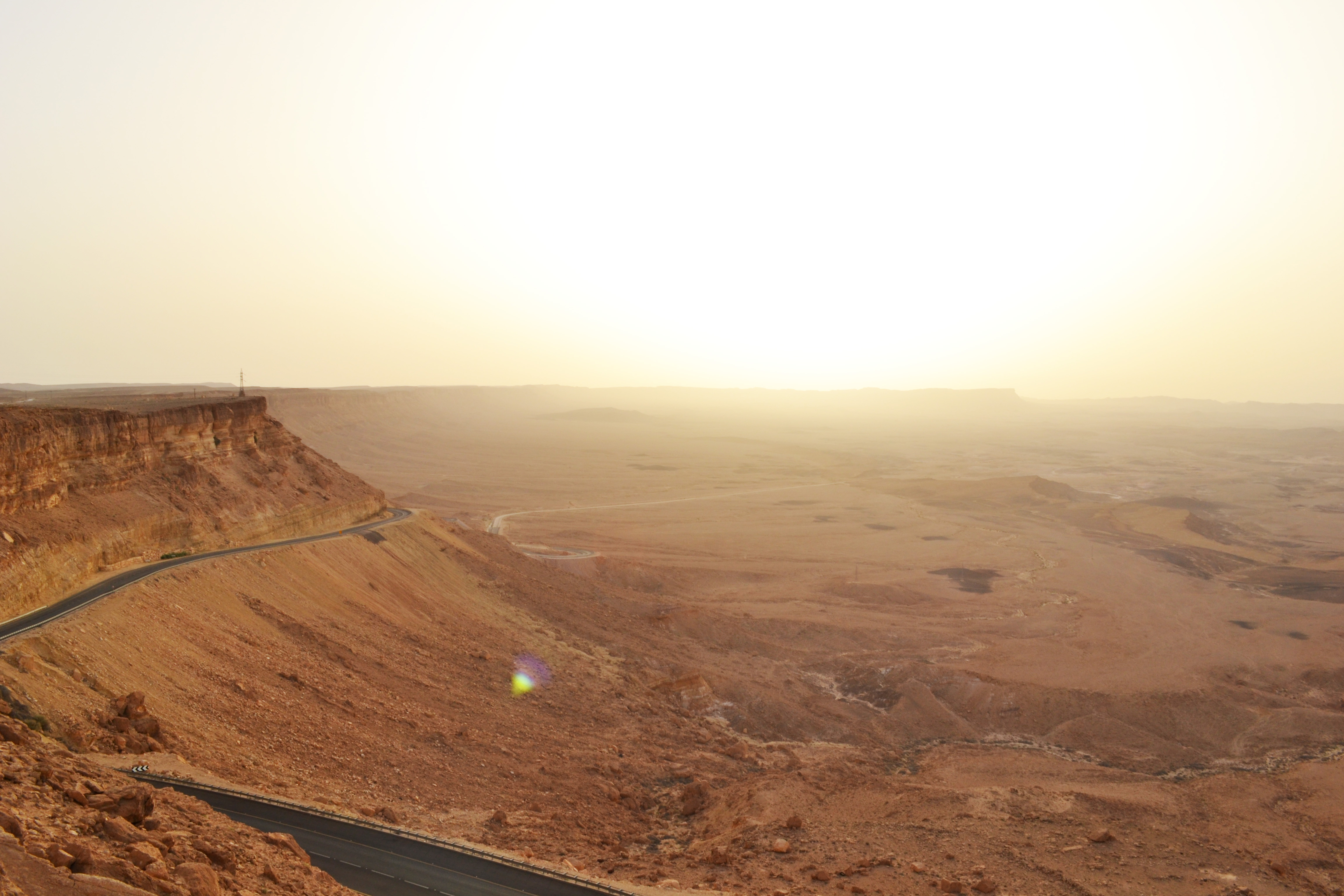 First up that afternoon in the Be’eri Forest was a hardcore introduction to mountain biking with Chaim’s son, Amir Rockman. Amir was a captain in the Israeli Navy and it showed – we went straight out in the energy-sapping heat on a route through glades of eucalyptus trees, over scrambly rocks and through sand traps. The choices were 1. Keep up or 2. Go and wait in the shade in shame. I opted for number 1, and discovered previously dormant but now screaming muscles in my legs as we cycled non-stop to the ANZAC memorial (well, I did occasionally stop – to pour water the temperature of a hot bath over my face, to fall off, or both). 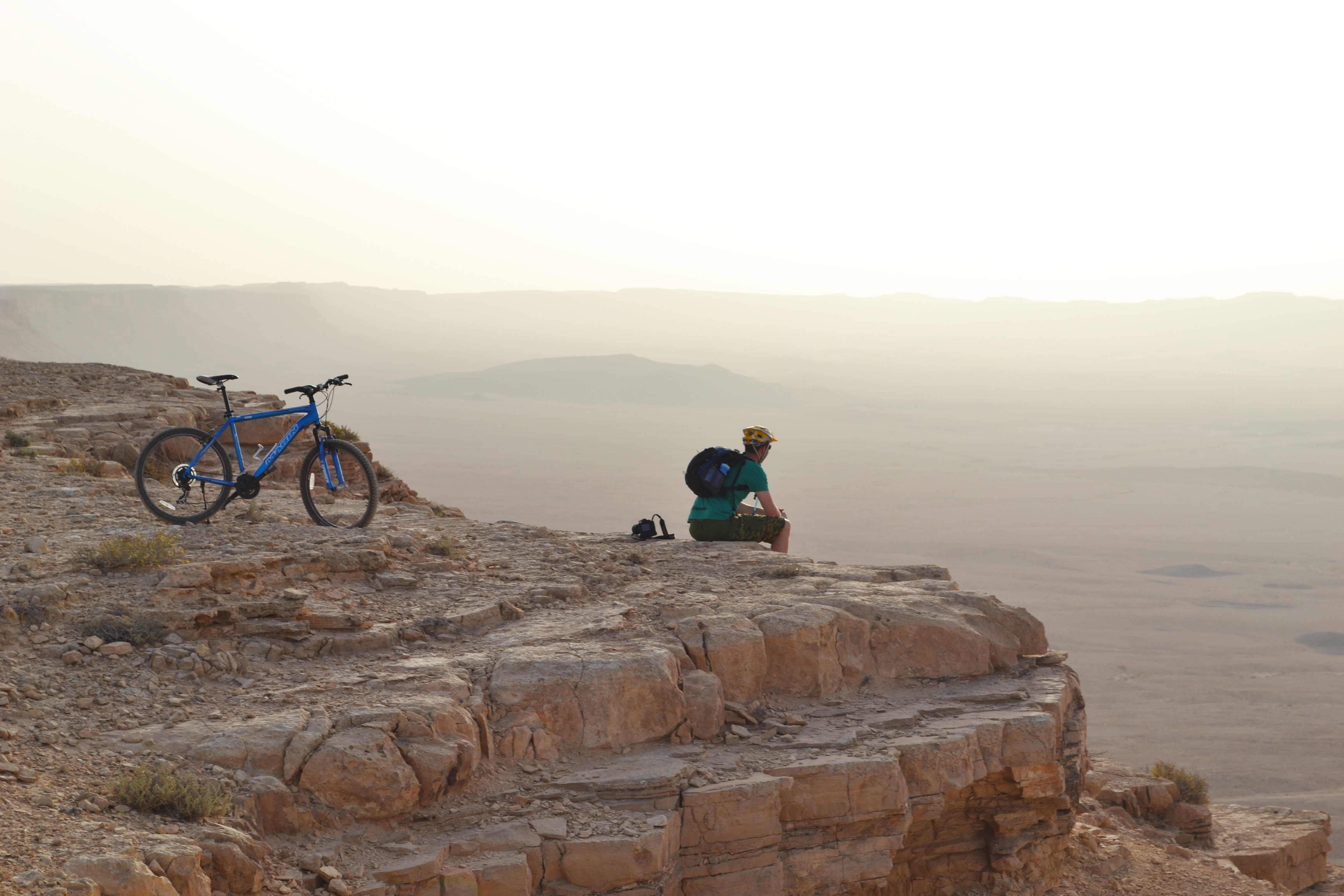 After the ride, the quiet calm of the ANZAC memorial was rather eerie. Erected to remember the Australian and New Zealand Army Corps who fell in Israel, you can climb up on top of the structure and look out over the distant Gaza strip, silent and peaceful from so far away. Despite the friendly, relaxed atmosphere throughout the whole country, there are quiet reminders everywhere of past conflict – young army recruits in uniform in Tel Aviv, a huge intelligence blimp bobbing on the skyline and, as we cycled away from the lookout, a derelict building, once part of a communal farm (or kibbut) now pockmarked with bullet holes. 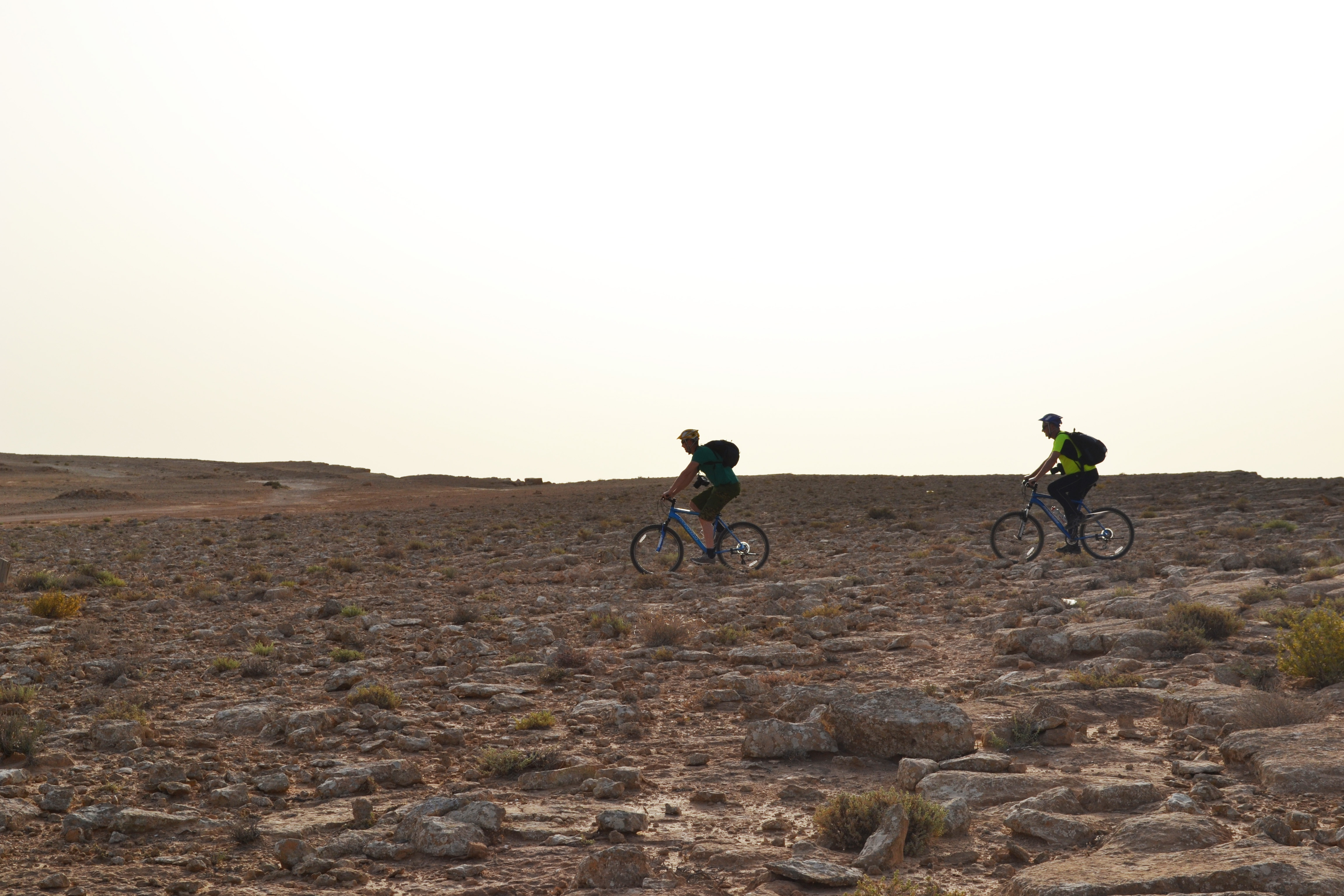 As we drove towards the Ramon Crater and into the Negev desert, the landscape became more moon-like and barren. Miles and miles of dusty rocky nothingness, marked by occasional sign warning you to watch out for rogue camels, made up a landscape both awe inspiring and alien. The perfect antidote to the dust and heat, though, was nestled hidden in the heart of the desert. The Negev’s desert wineries are beautiful little oasis of cool, leafy green in the barren landscape, an unexpected and welcome treat. 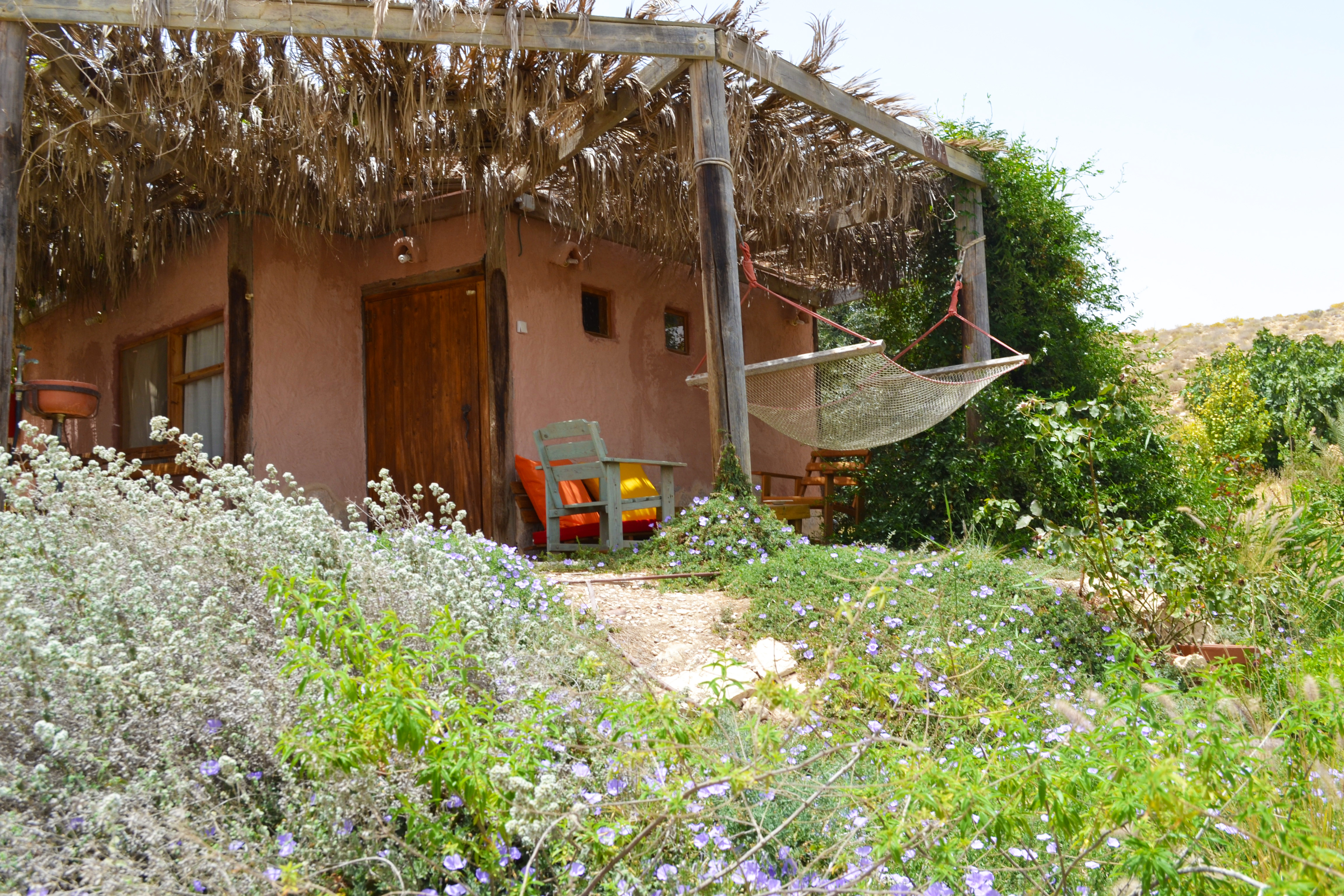 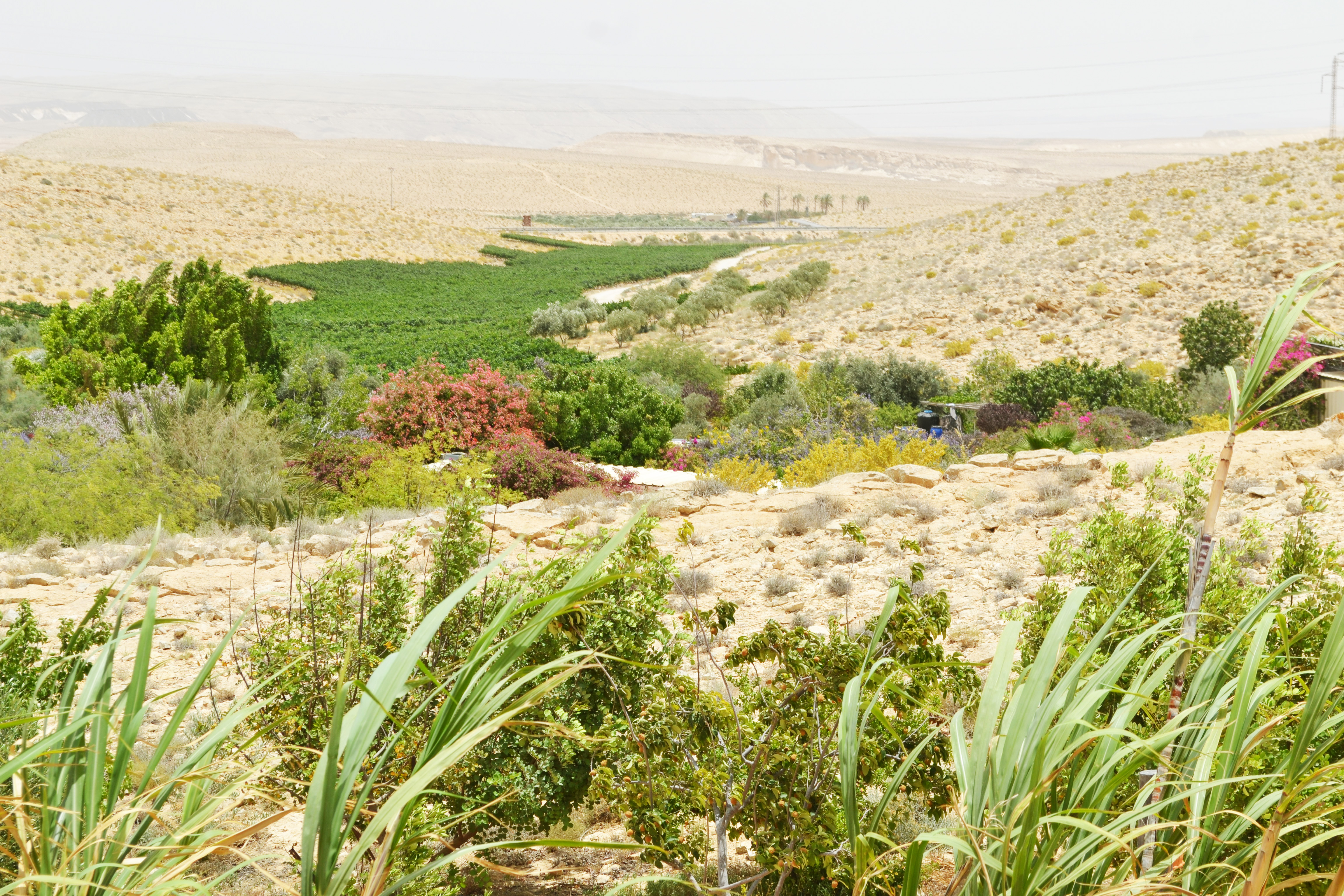 We visited the Carmey Avdat vineyard, owned by the charming Hannah and Eyal Izrael. Lush lines of vines dotted with pomegranate trees lead up to the farm and four gorgeous little eco houses nestle in the hillside, the perfect place to escape from real life. Phones, tv and wifi are discouraged, and instead, visitors can float in the natural rock pools, nap in hammocks under the passion fruit flowers, watch geckos dart over the brightly painted walls or watch meteor showers (known, rather beautifully, as ‘star rain’ in Hebrew). 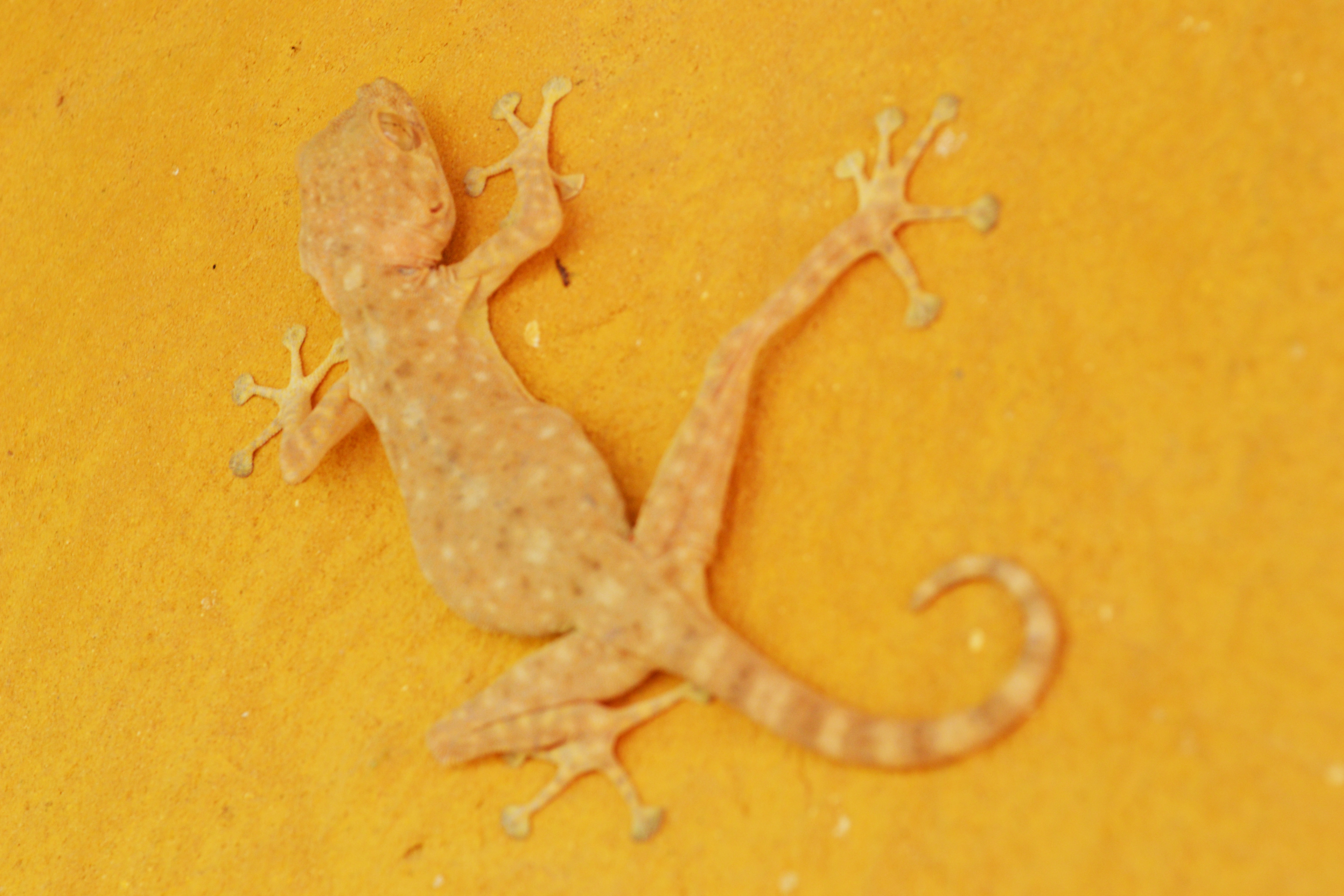 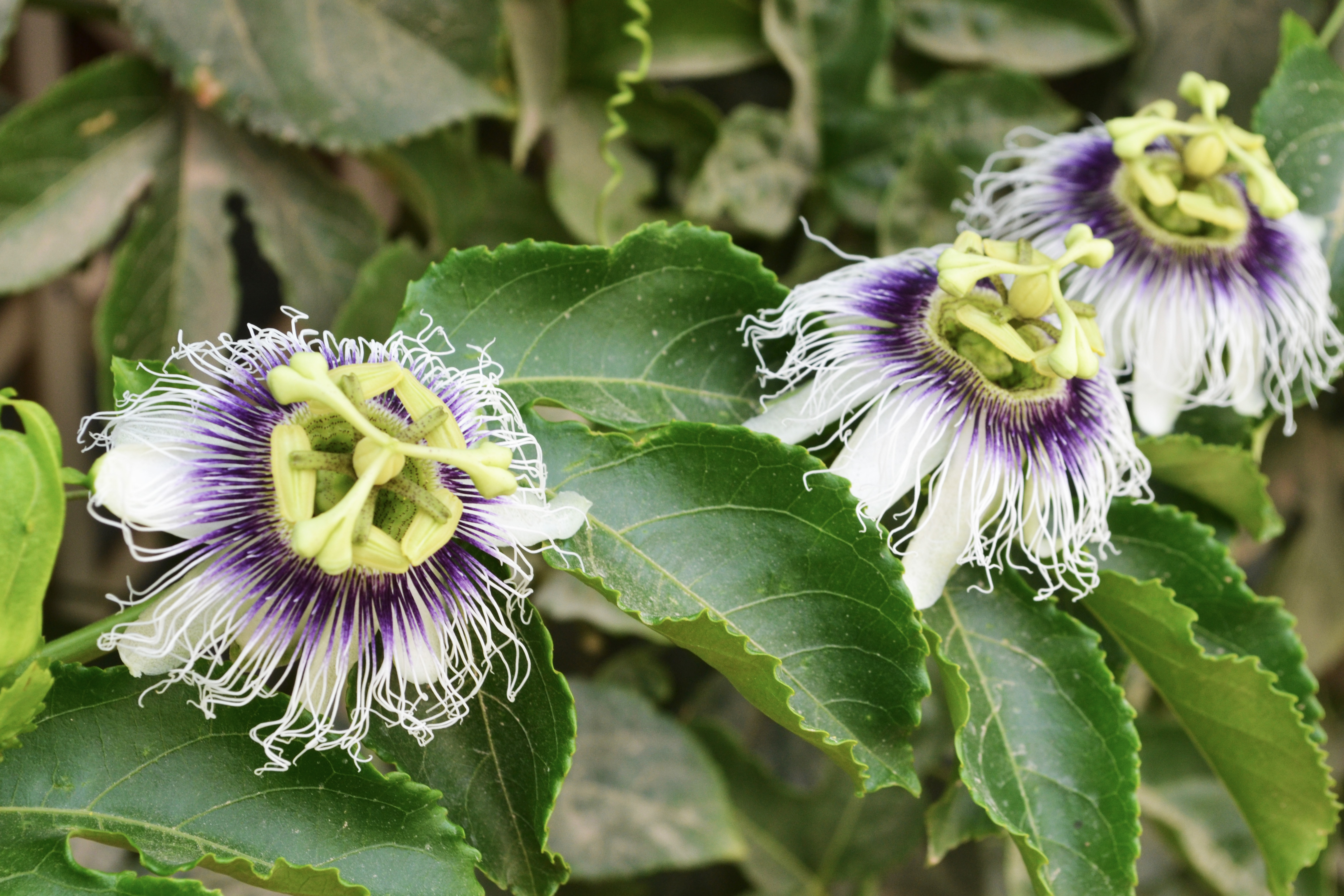 I was reluctantly pulled away from the beauties (and free tasting glasses) of the winery for our final bike ride on the way to the Dead Sea. Ominously known as the Scorpion’s Ascent, below us a treacherous, pin-sharp switchback road meandered through the desert’s valley, huge and empty in the harsh sunlight with only the ribbon of road cutting through it, flanked with signs proclaiming a ‘Firing Zone For 6km on both sides’. We hightailed it down the dizzying bends (well, the boys did, I wore my brakes out going painfully slowly) and then freewheeled along the empty expanse of road. The warzone feel was only accentuated when I was about a mile behind the others, enjoying the (relative) cool of a breeze in my hair and the bizarre sensation of being apparently completely alone in a never-ending desert when a trio of fighter jets screamed past, dropping dud shells and looping the loop above me. It’s not every day you cycle past Gaza and then watch the Israeli air force perform an air show for an audience of one. 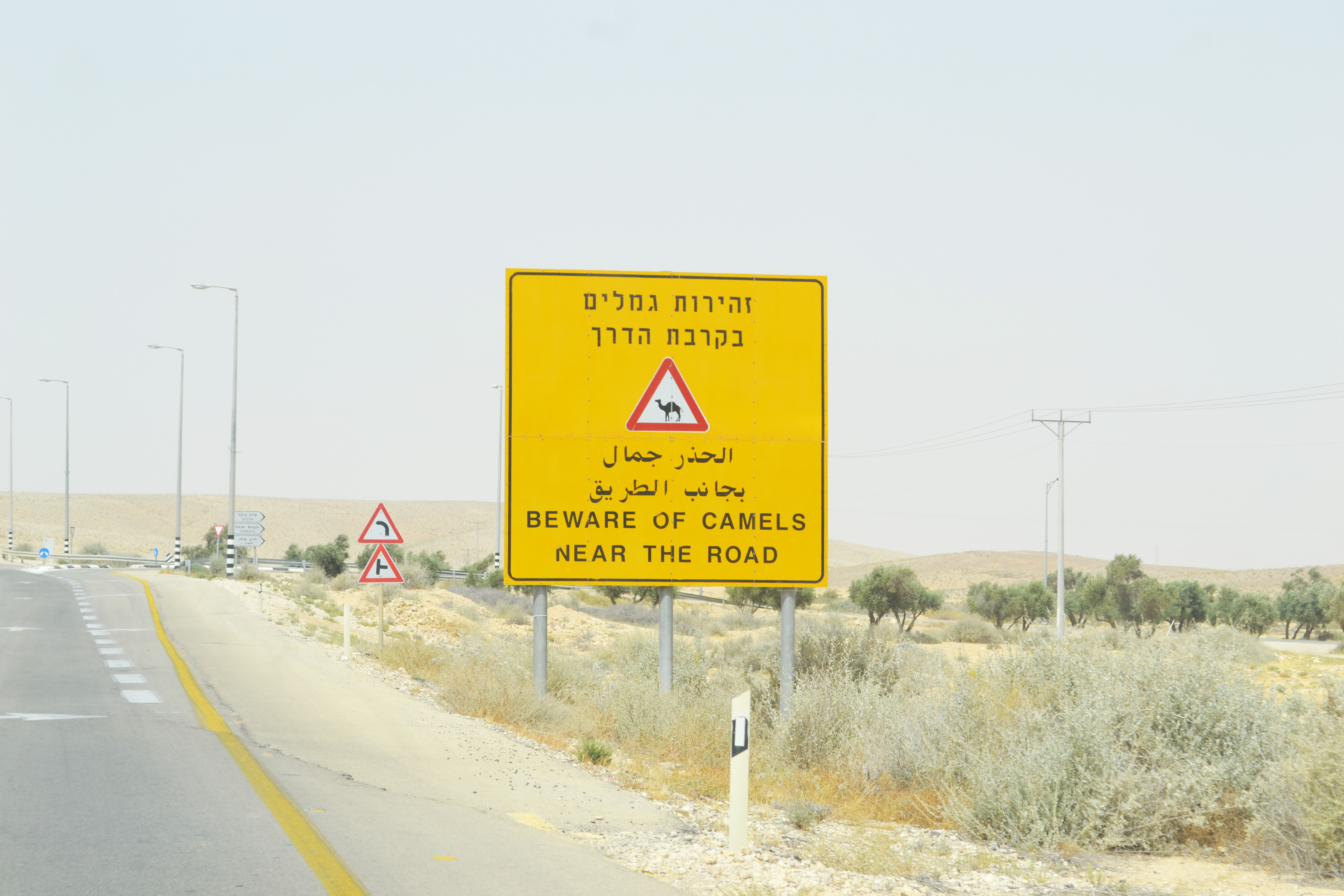 We cycled with Chaim and Amir Rockman of Gordon Active and visited the Carmey Avdat winery.