Are you a ‘headphones on, world off’ kind of exercise fan? If so, you’re not just staving off boredom – new research shows that dropping your favourite beats can also increase your endurance. Rock on! 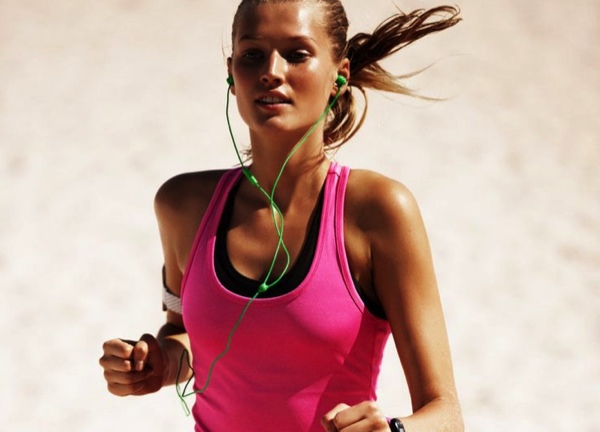 My running playlist is a sugary recipe of upbeat pop, 80s power tunes and a healthy dash of Rihanna but I Am Not Embarrassed. There’s nothing like a bit of Jay Z to get you out and onto the trail on a chilly winter morning, am I right? Whilst I usually listen to music to A. Stave off running monotony and B. Pretend I’m in a music video, there’s another benefit to sticking your earbuds in before you exercise – new evidence suggests that your favourite tunes could actually be improving your athletic performance.

According to research carried out by leading sports psychologists Peter Terry and Dr Costas Karageorghis, listening to music during strenuous physical activity has the potential to increase an athlete’s endurance by up to 15 percent. Their findings showed that music that is synchronised with the stride pattern of runners allows athletes to run longer distances. Plus, energy efficiency can be increased by up to three percent, which means long-distance runners in particular can go further without using up extra oxygen. You can tailor this effect to suit you, too – when used in conjunction with an exercise tracker, you can monitor how different music tracks affect your performance, and create workout playlists accordingly.

Studies suggest that listening to rhythmic, high-tempo music that matches your stride pattern can improve performance significantly. And while the positive effects of music can begin to wear off as you push yourself through your own anaerobic limit, there is strong evidence to suggest that listening to the right tunes on your iPod or MP3 player can be enough to squeeze a few extra percent out of your performance levels.

What are the motivational benefits of listening to music while training?

It is important to bear in mind that not all music will deliver performance enhancements for athletes. The key is to make sure you pick the right tempo to suit your training, and select songs that you find inspirational or that resonate with you on an emotional level. Eye of the Tiger, anyone?

Humans are naturally rhythmical, and without knowing it, we alter our stride and speed of movement in time with music. When the beat of our favourite songs is in time with our physical activity, we gain a degree of pleasure from the feeling – which is why dancing (or at least trying to) comes so naturally to us. Research has also shown that listening to music reduces the perception of tiredness. The optimum speed for workout music is between 125 and 140 beats per minute, which incidentally is the speed at which most pop songs are recorded. So no more Nicki Minaj guilt!

Want to make music work harder for you? A fitness tracker will monitor your heart rate and exertion levels, while beats per minute (BPM) apps and software can be used to find suitably fast tracks from your music collections, and create workout playlists with them on your phone. So sync up and go sweat it out to some Prince.