“Growing up, my family’s favourite holiday destination was a little campsite called Mas Patoxas, a campsite north of Barcelona and south of the Pyrenees on the Costa Brava. I remember eating lorry loads of shellfish, staying in a swimming costume all day and turning a lovely shade of brown on the golden sand. When Sian invited me to go back to see the region by bicycle with the Tourist board of Catalonia, I couldn’t resist. 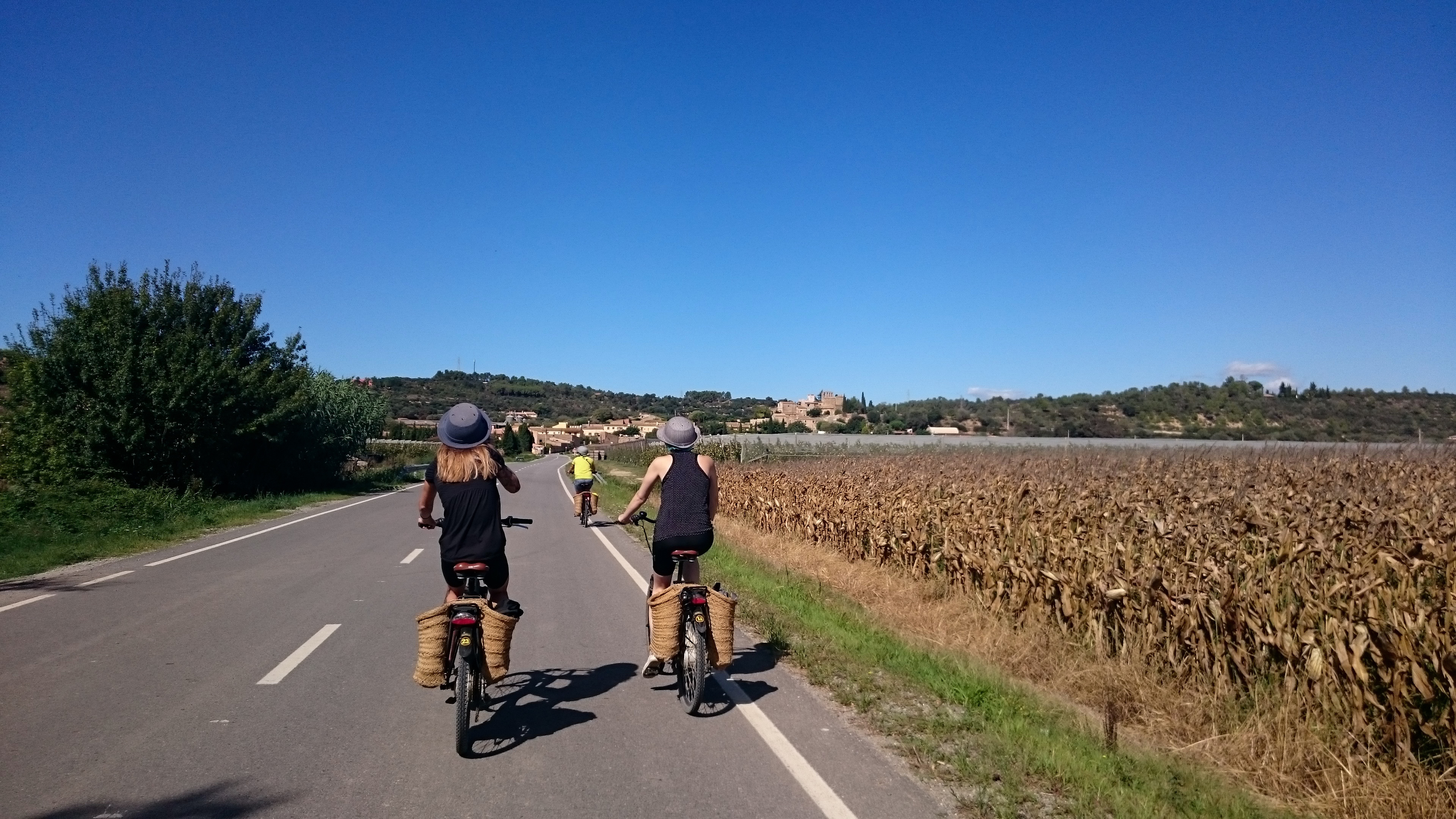 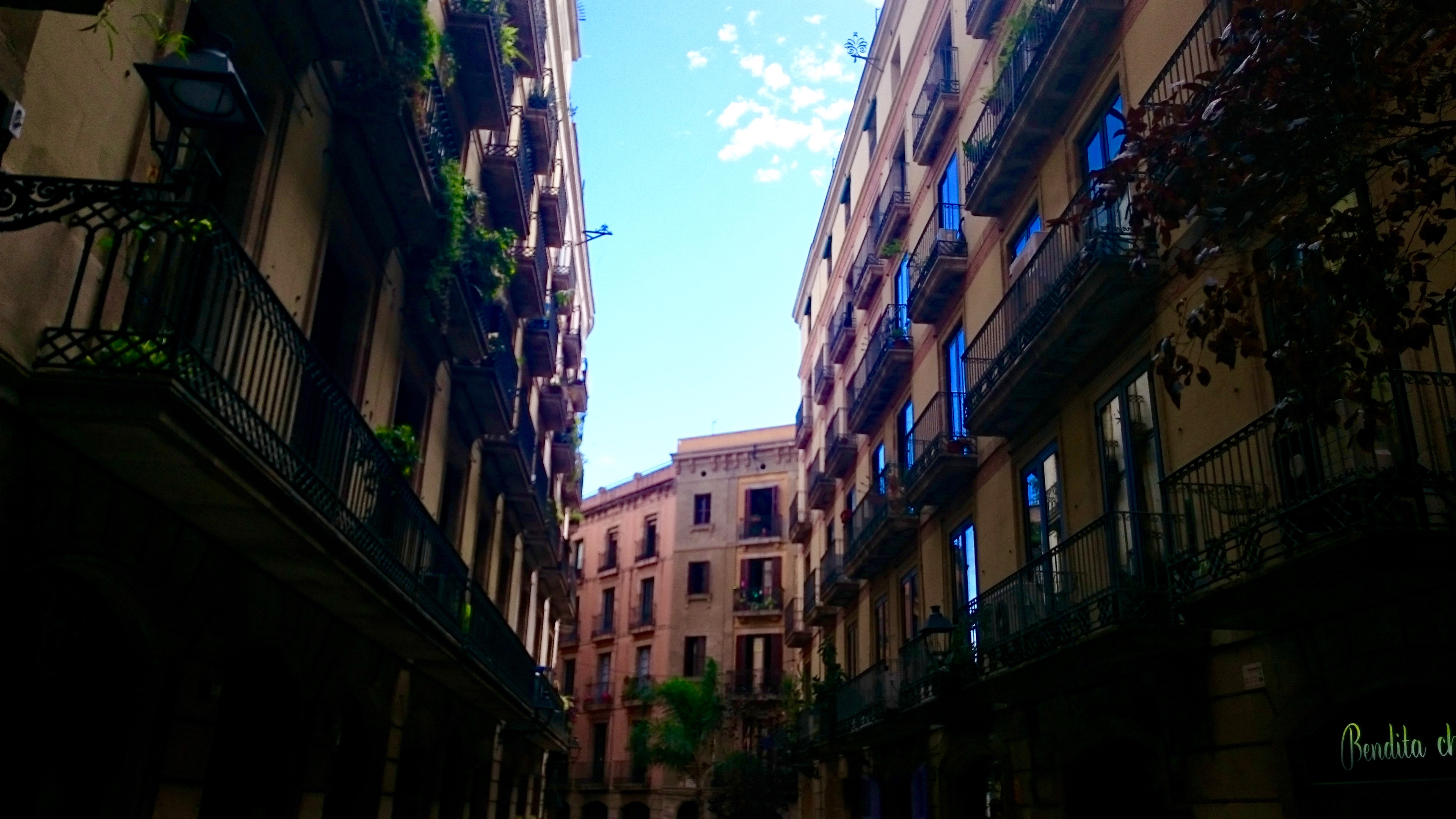 After cycling around Britain and battling the frosty mornings, wind and rain even in August, I knew Catalonia was going to provide some consistency. I wasn’t wrong, a mid-September trip gave us sun and blue sky every day, with temperatures between 25 – 30 degrees. A strappy top and a pair of cycling shorts was a far cry from the layers of Lycra needed to cover every inch of my body from the cold air at home. However, this wasn’t a trip for the hardened and competitive road cyclist. This jaunt was for anyone who wanted to see a beautiful part of the world at the speed of a few gentle pedal strokes.

After an early morning start and a bumpy plane ride with views over the Pyrenees it was time to meet my fellow bloggers. At lunch by Barcelona’s main beach we had our first taste of Mediterranean cuisine at La Gavina. With a tummy full of mussels, swordfish and a cheeky glass of white wine (or two) it was time for our first cycle. 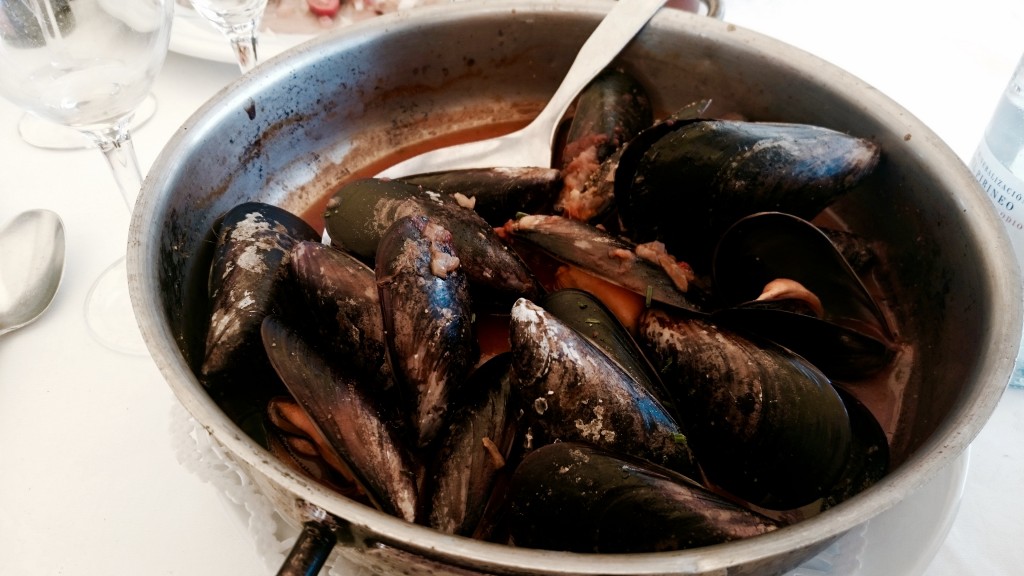 Barcelona is made up of a grid pattern that could be confusing to a hot and bothered tourist trying to navigate the streets by bike, so I would thoroughly recommend taking the pressure away and being lead around the city by an experienced guide. Over four hours at a leisurely pace, we cycled down the famous narrow streets of the Gothic Quarter into open squares with fountains, cafes and hundreds of pro-independence flags hanging from balconies.

We saw the Olympic village downtown on the beach and had time to stop for a drink of clara con limón (a blend of beer and lemon soda) that was going to become a refreshing habit mid-cycle over the next few days. Who wouldn’t love a sip of shandy by the sea? We got back on our bikes, refuelled and rode uptown to the Plaça de Gaudí, a park opposite the Nativity façade of the Sagrada Família. It was quite moving witnessing Gaudi’s unfinished creation in all its wacky splendour, whilst cycling up the Carrer de la Marina with palm trees either side. 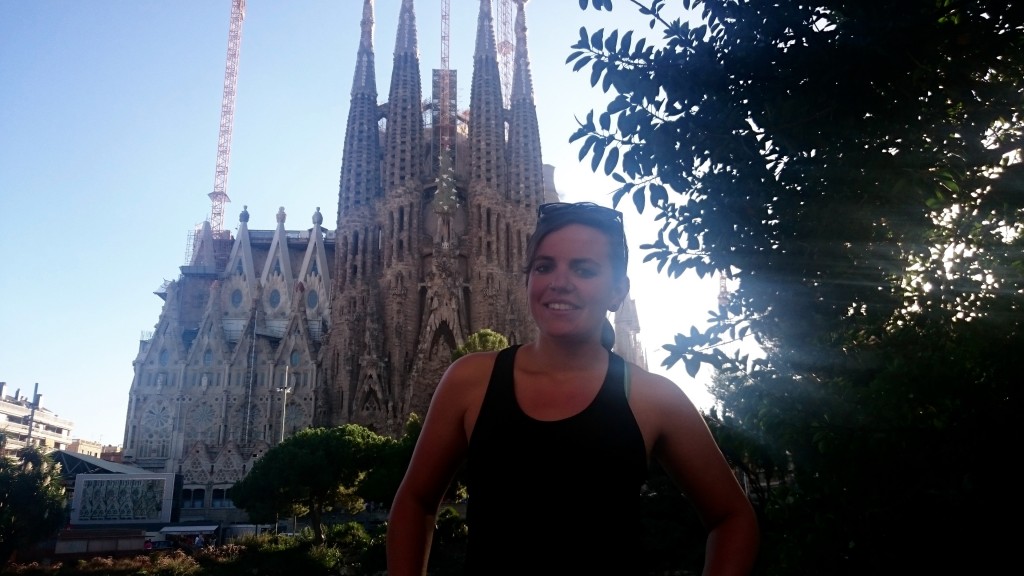 If we’d had time, I would have loved to bask in the sun in Barcelona’s Parc Ciutadella. Home to Barcelona’s Zoo as well as the Parliament of Catalonia, dancers were rehearsing for a festival called La Mercè, an annual five-day street party that runs events all over the city. Instead our cycling exploration of Catalonia was going to take us out of the city, where the real magic lies. 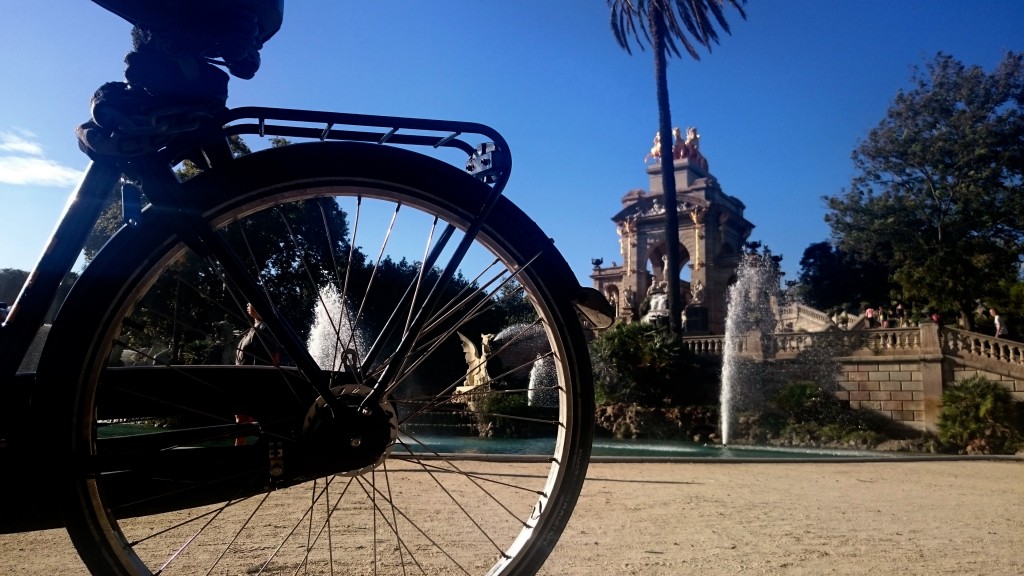 I was secretly excited to ride my first ever e-bike courtesy of Burricleta through the Ancient village of Pals. It was wonderful to cycle along the dusty roads with some pedal assistance (sadly it isn’t like a moped and you do have to do a small amount of work). It meant we could concentrate on the medieval history and views of the route without breaking a sweat. The helmets that were provided caused some laughter within the group, they were more like horse riding hats but better than nothing! Safety first kids! 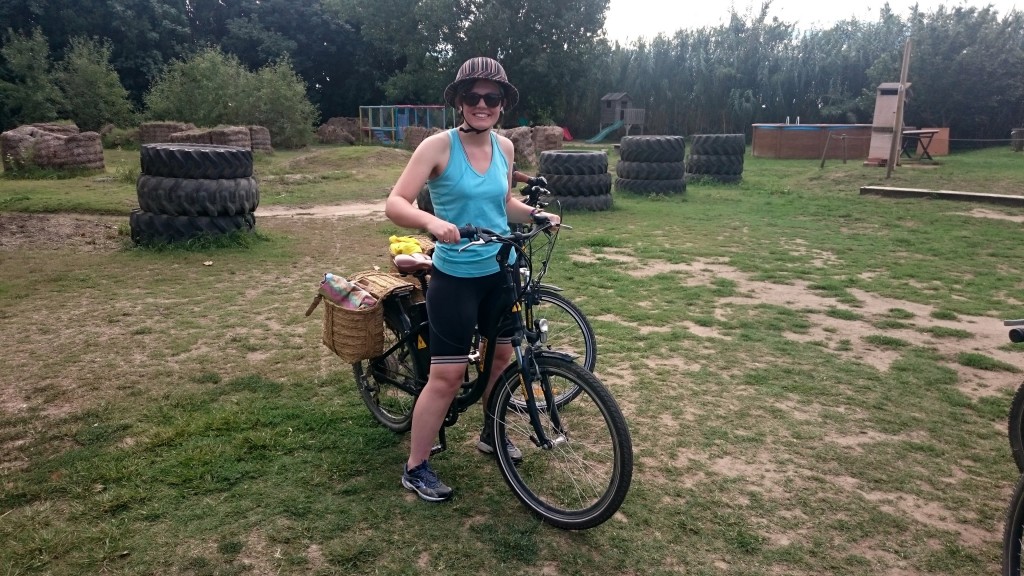 The bikes were comfortable and upright with two wicker baskets providing plenty of storage for luggage. If only I’d had cheese and wine in my backpack, rather than warm water and an energy bar.

After 15 miles of blue sky and fields of corn we handed our bikes over to the support car (I felt like a pro) and walked down the road to Platja del Raco Begur, empty in comparison to Barcelona’s busy beaches. We had lunch at the end of the 5km stretch of coastline and I had the most delicious mussels and pineapple of my life, although not at the same time. My mouth is watering just thinking about the food I tasted during this trip.

When I heard that Game of Thrones had just finished filming in the medieval city of Girona, a gasp escaped my lips. Sadly I didn’t get that selfie with Jaime Lannister but I could completely understand why the fantasy TV series would use it as a location. Every corner looked like a film set, and walking around in the evening with the sunset on our heels provided the perfect temperature to enjoy sightseeing, in what can be a very hot climate. 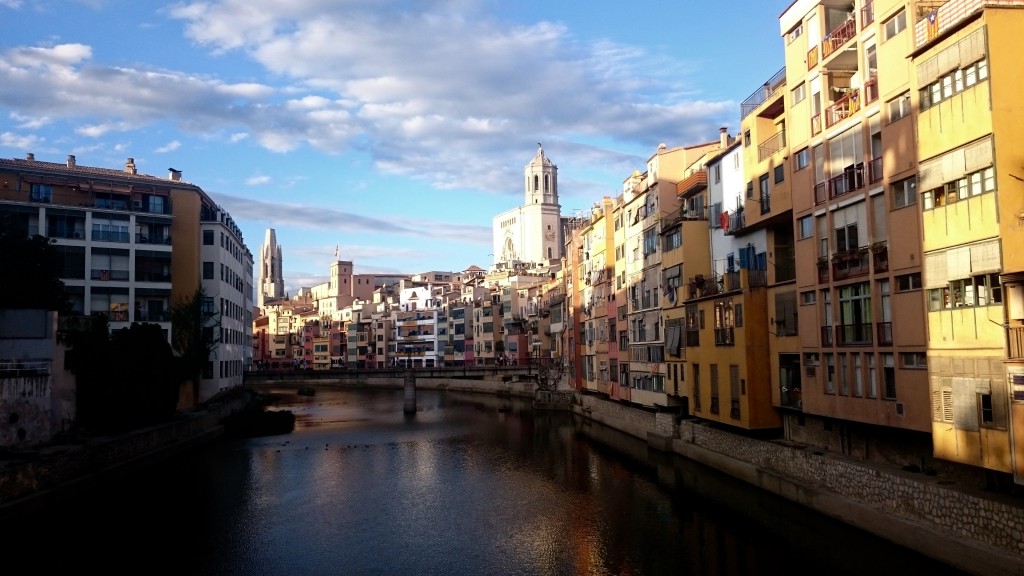 We ran up the 90 steps (counting as we went for good luck) to the Cathedral, and watched the sky turn pink as we explored the gardens hidden behind the building. We witnessed couples sharing romantic moments in Los Jardines de la Francesa (The Gardens of the French lady) including a newly wed couple posing for photos. 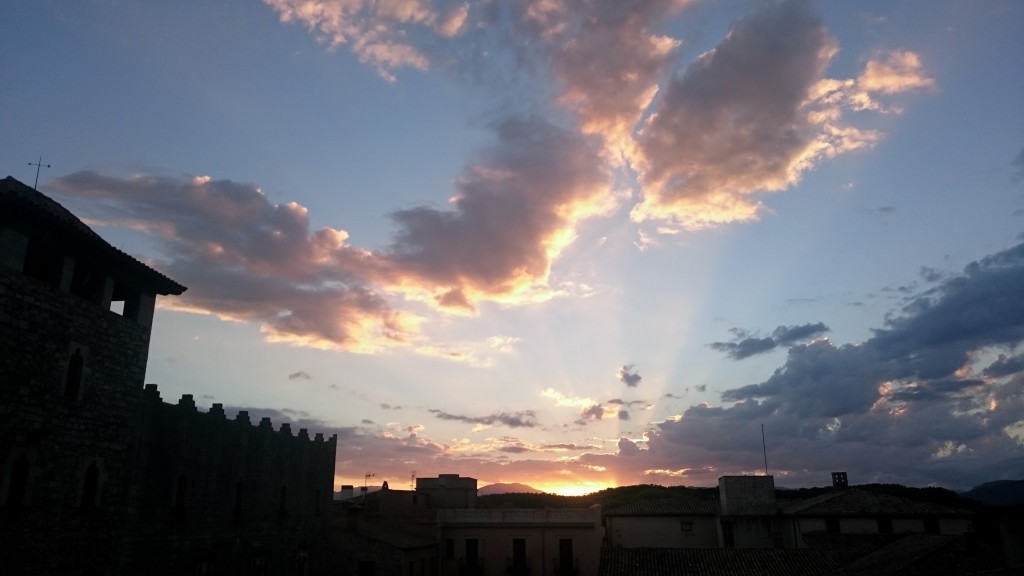 It really was a spectacular site to take in the city before we walked down through the Jewish Quarter to Plaza de Sant Félix, where there was another legend that was a rather unique photo opportunity I had to go for. Supposedly, if you want to return to Girona (which I most certainly do) you must kiss the Lioness’ bum and the city will welcome you back with open arms. I took the opportunity to climb the steps and plant my lips on the statue’s derriere but found myself holding the rather awkward position for far too long as my picture was being taken. Never mind. How many stone bottoms have you kissed? Leave your comments below! 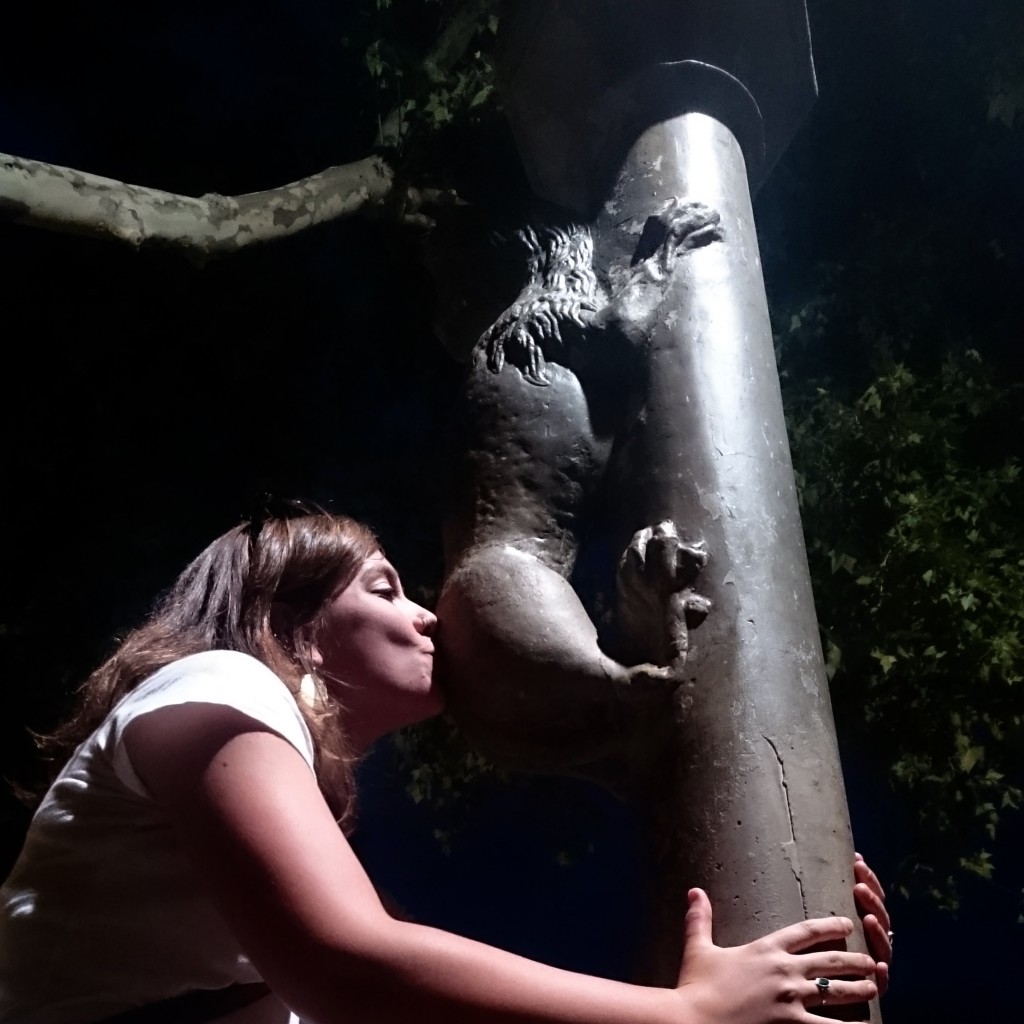 The next morning we cycled the Green Ways of Girona, a flat cycle route starting inland at Llagostera and taking you to the beach of Sant Feliu de Guíxols. We were handed lovely Scott hybrids (sadly without a battery pack) and rode a gentle 12 miles in the morning sun. It had been a while since I’d been in the Mediterranean Sea, in fact any ocean that didn’t require a wetsuit, so to put on a swimming costume and run into the warm blue water was a luxury. The beach was quiet and calm and only a short walk away from where we had our daily fix of tapas. If only we could have stayed longer and improved our tan lines. Sadly I still have my rather unfortunate cyclist’s tan (who am I kidding, I’m totally proud). 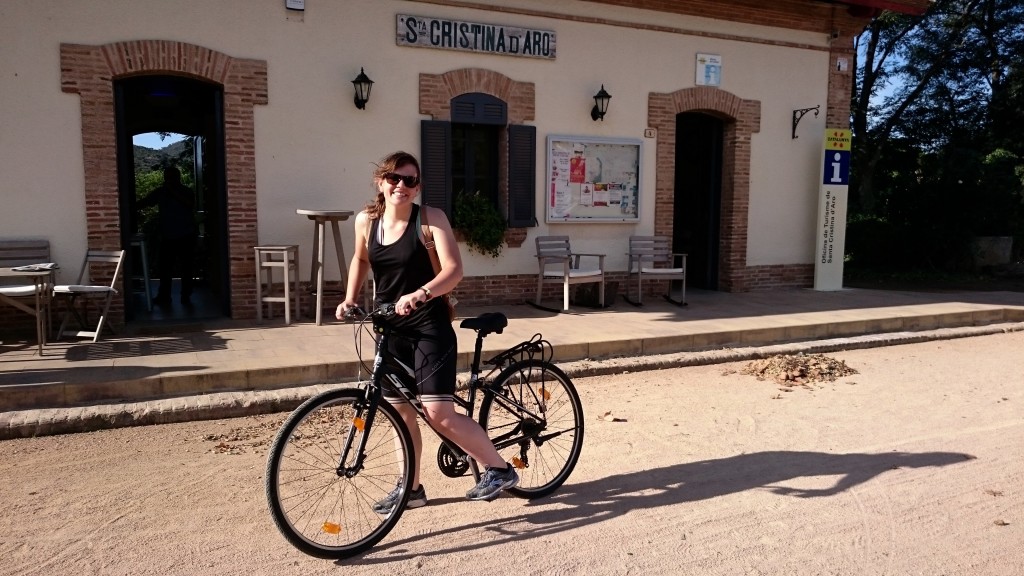 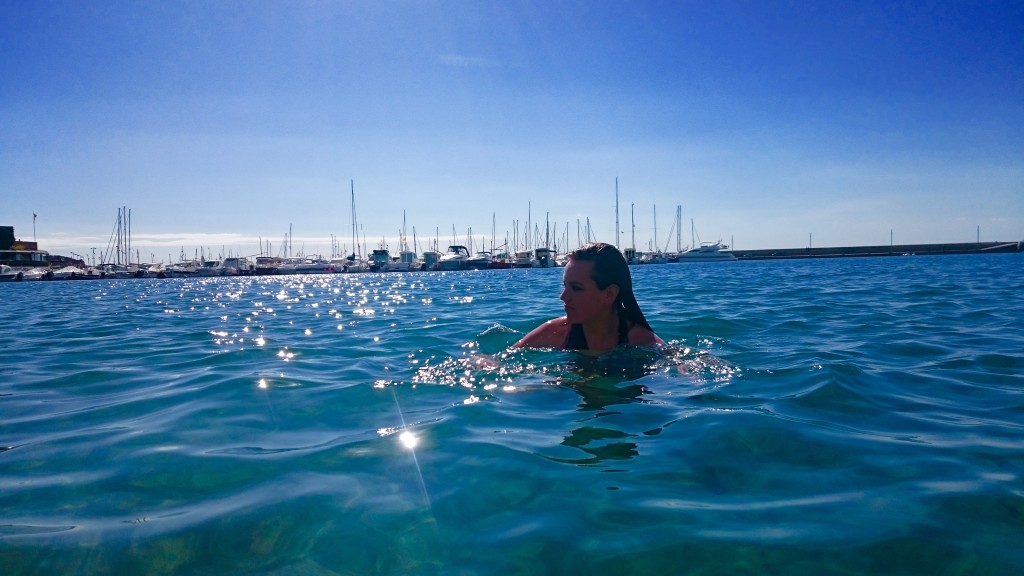 After a long transfer from the Costa Brava to the Costa Daurada we had a rather unique experience in store. We witnessed an intimate performance of the evening service vespers by the monks at the Royal Monastery of Poblet. The Gregorian chant sung was very atmospheric and the building was filled with archaic art and architecture that was literally divine.

Having toured the site the night before, early on Sunday morning we started our next guided cycle tour just outside the monastery. I was rather envious of a group of road cyclists who were out on a morning ride, but with our second turn on an e-bike the novelty hadn’t worn off, especially as the engine on this ride had more of a kick.

I’m a huge fan of the cycling app Strava, and I’m now the proud owner of the Queen of the Mountain badge (QOM) for climbing up to Montblanc. This is not to be mistaken with the other ‘White Mountain’ that holds the highest peak in the Alps. 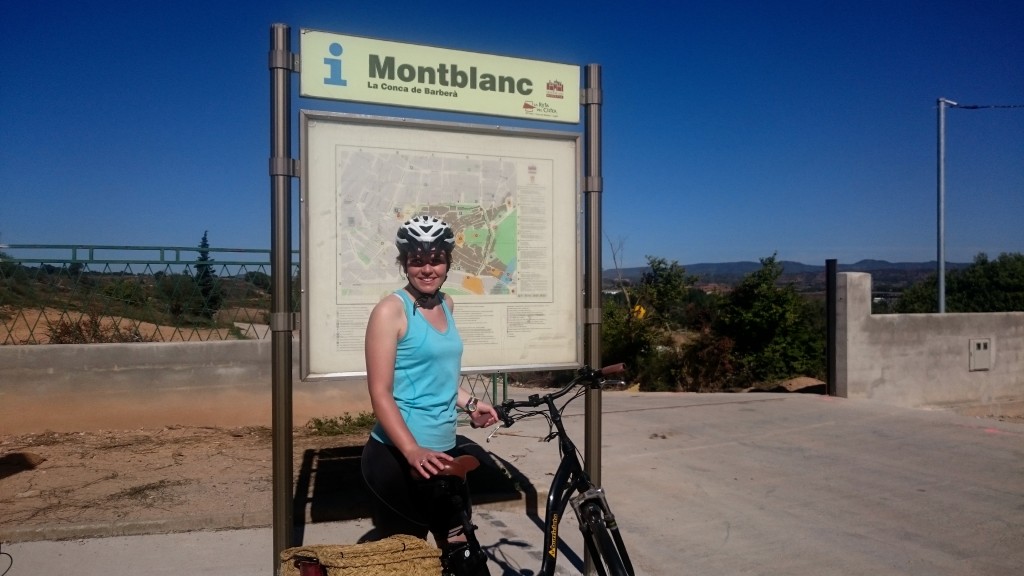 Finishing our tour for a little spot of wine and tapas tasting, we went on to our second part of lunch, where I suffered a lack of talent at a Catalan drinking game, something I thought I’d escaped after university! The owner of the restaurant came out at the end of the meal with a porron, a traditional drinking vessel used to hold dessert wine. The aim of the game is to start with the spout at the opening of your mouth and pull it as far away from your mouth as possible without spilling a drop, but whilst continuing to pour. It takes a lot of practice, but with a lot of practice comes a lot of alcohol consumption, and alcohol never helps! Donna demonstrates in the photo below: 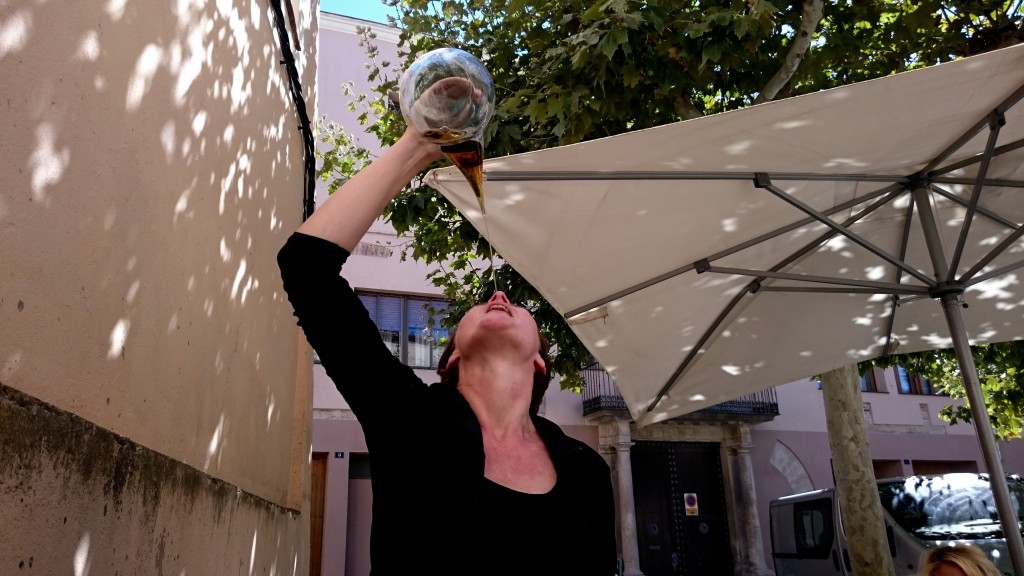 After a boozier lunch than expected, we had our second cycle of the day, which was thankfully all downhill. We were given single-speed bikes that caused some hilarity when my legs couldn’t go around quick enough to power the bicycle past Donna our race, and I had to use unfair tactics to claim a win.

The views were my favourite yet of the trip, and the red clay of the scenery resembled America’s Grand Canyon. It would have been perfect cycling with a family, however as it was all downhill the way we were going, it meant that it was all uphill the opposite route which might have been more of a struggle with dessert wine sloshing around our stomachs. Access to this cycle route is completely limited to cyclists, horse-riders and pedestrians, so it’s incredibly safe. We continued our long day moving on to some really strenuous wine tasting at La Catedral del Vi as well as a guided tour around the winery. 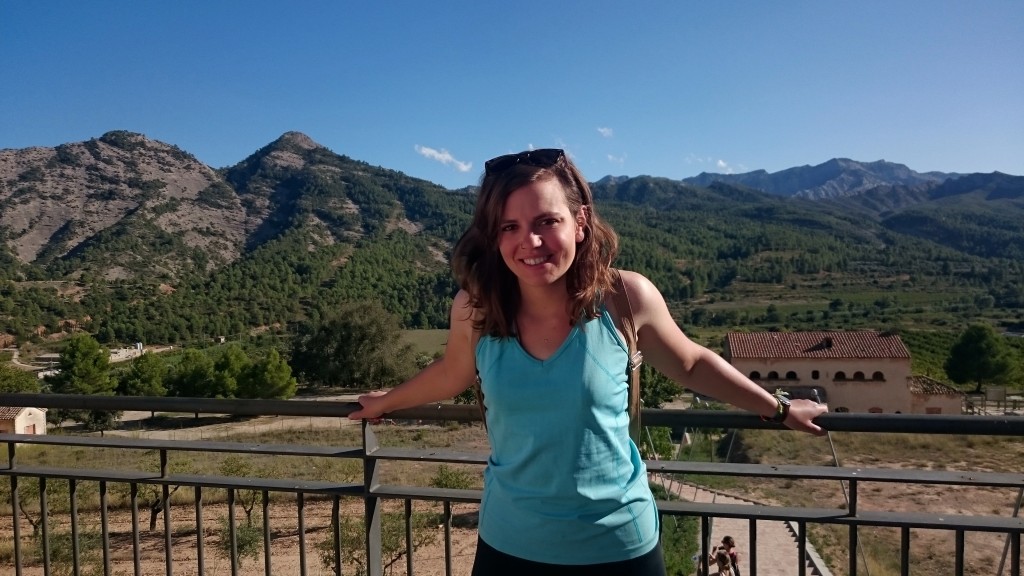 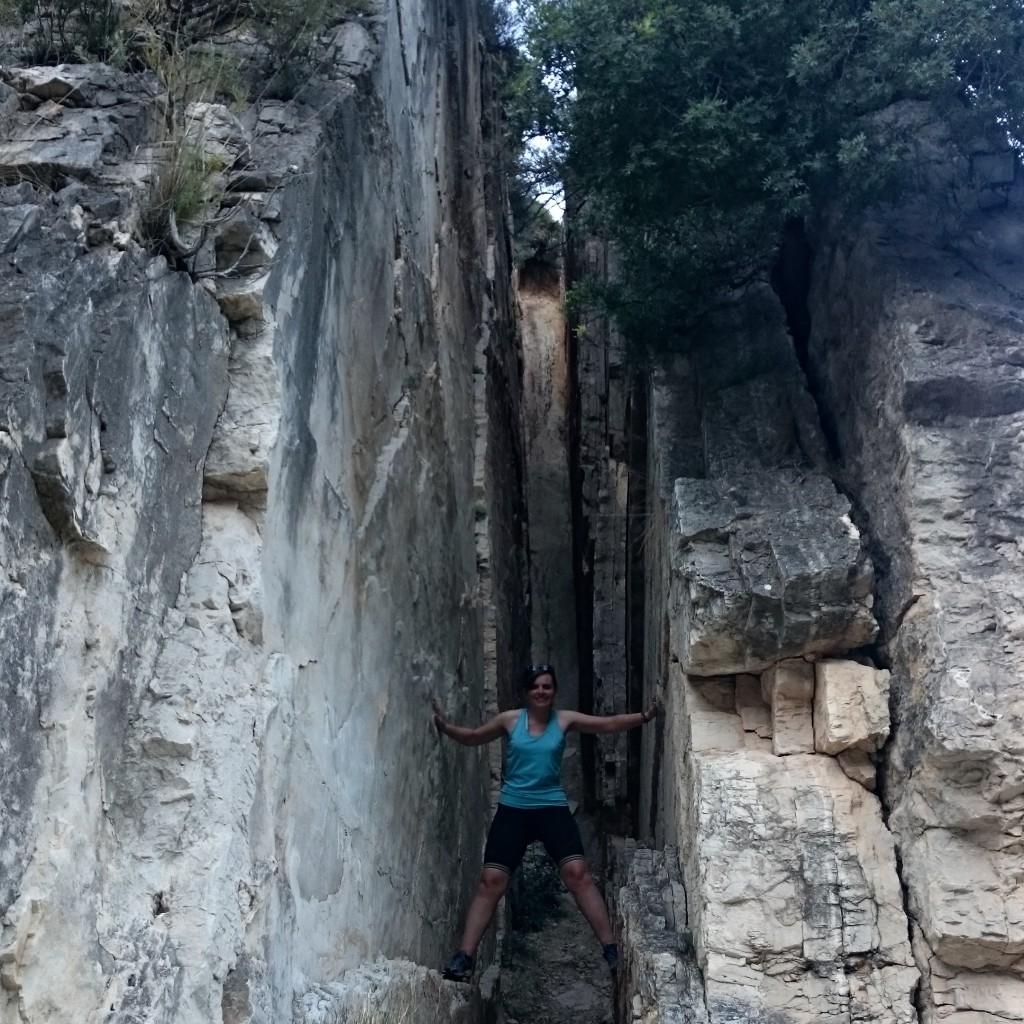 For our final cycle, the Catalan tourist board took us to the rice fields and wetland of Ebro Delta. A haven for bird watchers (we saw flamingos!) the landscape was so flat you could see for miles. We watched hthe rice farmers working their crops and the smell of the mud was surprisingly delicious. Maybe that was because of the cycle working up my appetite.

We stopped by the Delta Birding Festival, which is an annual event celebrating the wildlife found in the wetlands of this western part of the Mediterranean. I spotted a crayfish crossing the road, (I thought it was a scorpion, for just a second) and we took turns punting each other around in boats. I had to pass the punt over to Juliette as I proved to be a bit of a wimp with the steering control and slowly but surely kept crashing us into the bank of the man-made river. 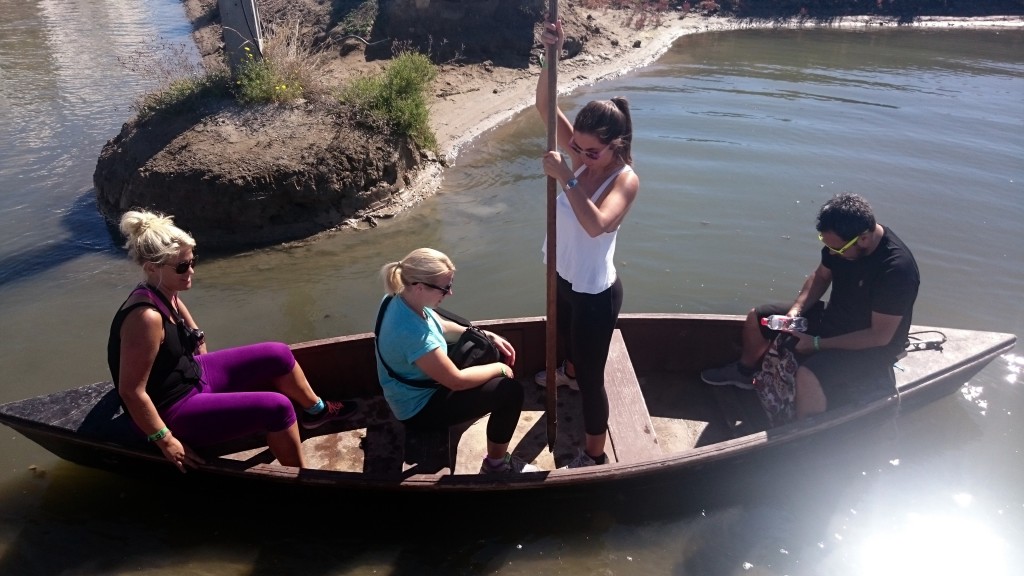 Over lunch we spoke about the highlights of our trip, which I still can’t decide on, and ate the most delicious noodle paella as we drank a final glass of Catalan wine. In five days we saw and experienced so many new things this unspoilt region has to offer by the speed of a bicycle. Having the mountains and ocean so near as well as being a short drive from Barcelona makes this an amazing location for all types of adventures. It is the perfect cycling holiday destination even for the non-cyclist, but I’m now itching to get my road bike up those mountains and get my heart rate up a little bit.

Thank you to the Catalan Tourist Board for having me, especially Paula, our wonderful hostess.”

You can find links below of some of Mary’s favourite places to stay and eat from her trip.