Another summer, another awesome climbing weekend on the stunning Dorset coast. Gavin, Beren, Pete and I headed to the Isle of Purbeck to conquer some rock, indulge in some salty sea swims and try some mental local cider. 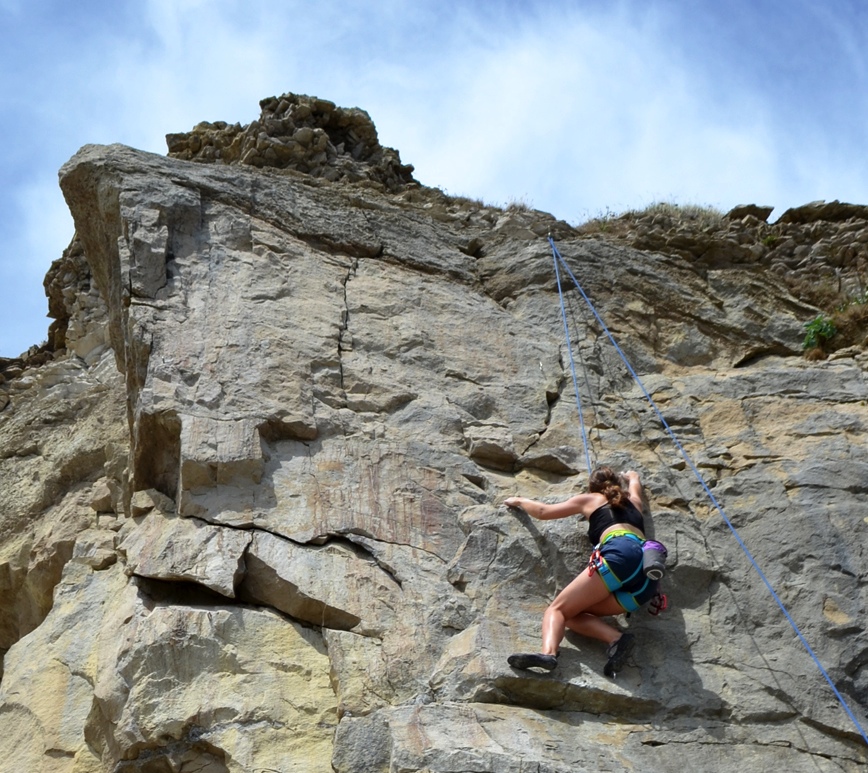 The beautifully-named Dancing Ledge on Dorset’s Isle of Purbeck is a joyous place to climb. So called because when the waves wash over the horizontal surface, the surface undulations cause the water to bob about making the ledge appear to dance, this magic spot is a few miles walk from Langton Matravers. Head through a field of very friendly cows and suddenly there’s a wide expanse of quarry, dramatic cliffs and a drop to the crashing sea. The sport climbs here aren’t very beginner friendly, but there were a few easier routes for me to get to grips with when I wasn’t watching the guys clinging like limpets to the really hard routes. This is true Jurassic Coast – you might spot the occasional ammonite half buried in the wall as you work your way to the top. Plus, it’s worth climbing here just to get to try the very naughty Countryfile-themed 5+ route… 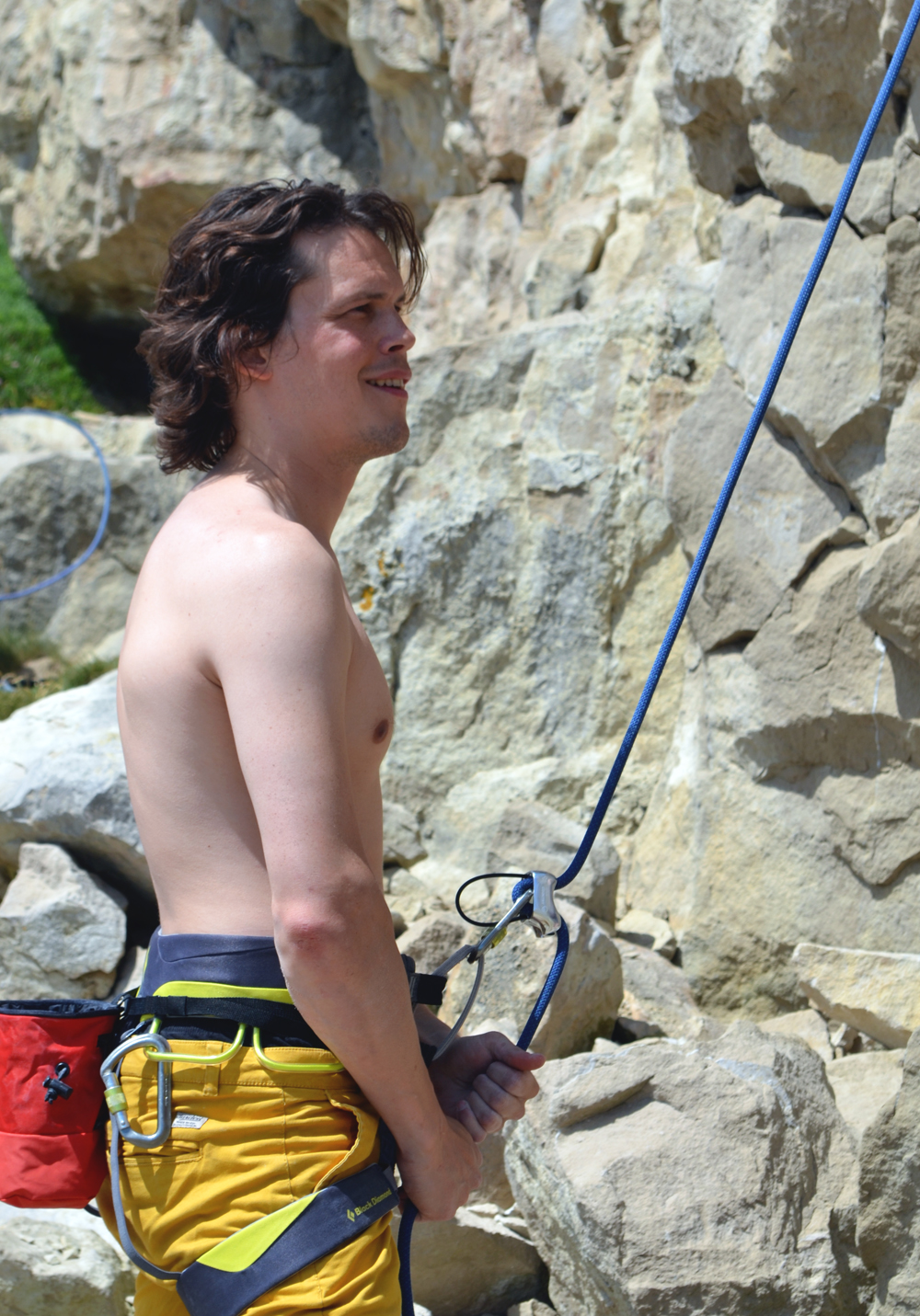 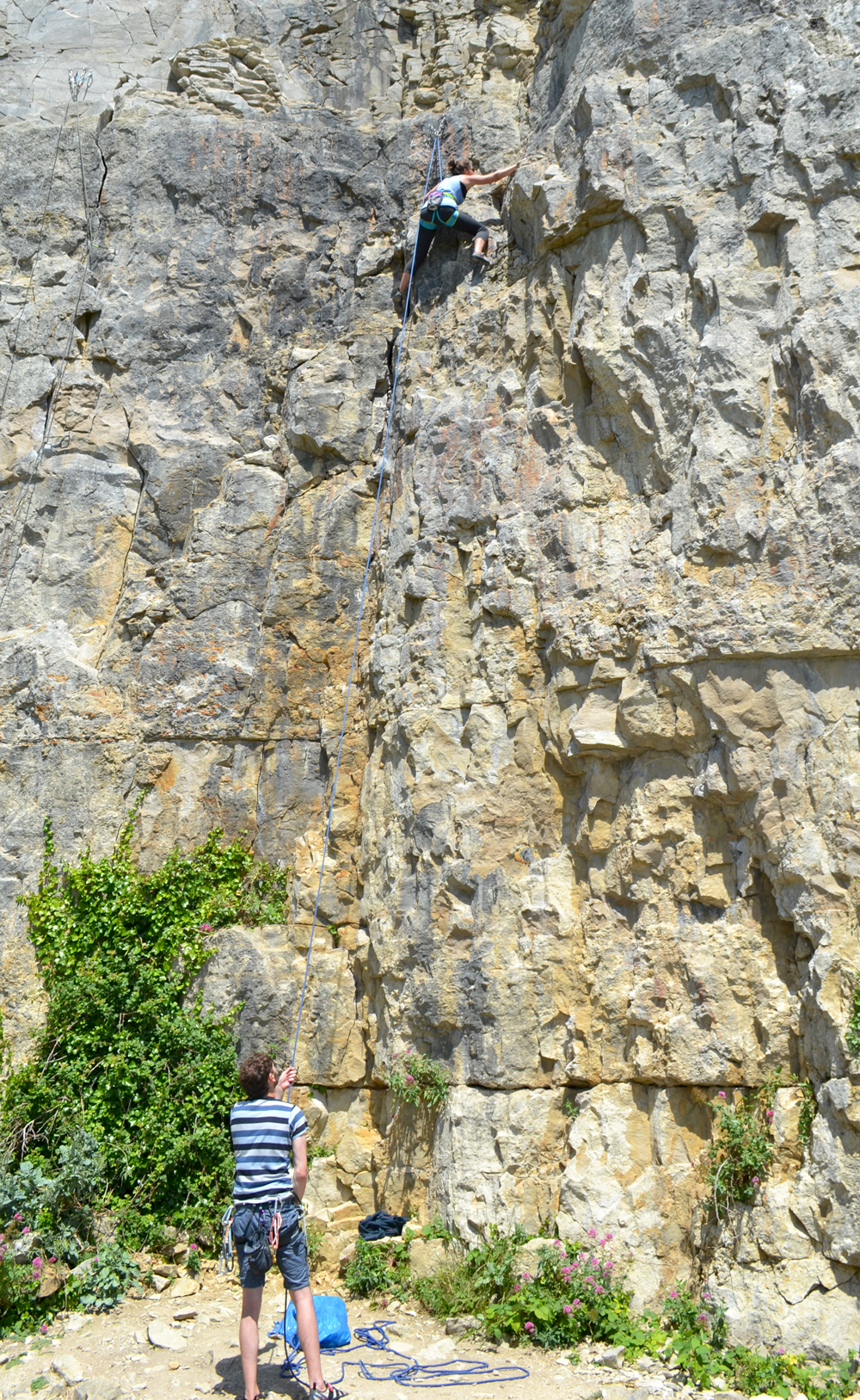 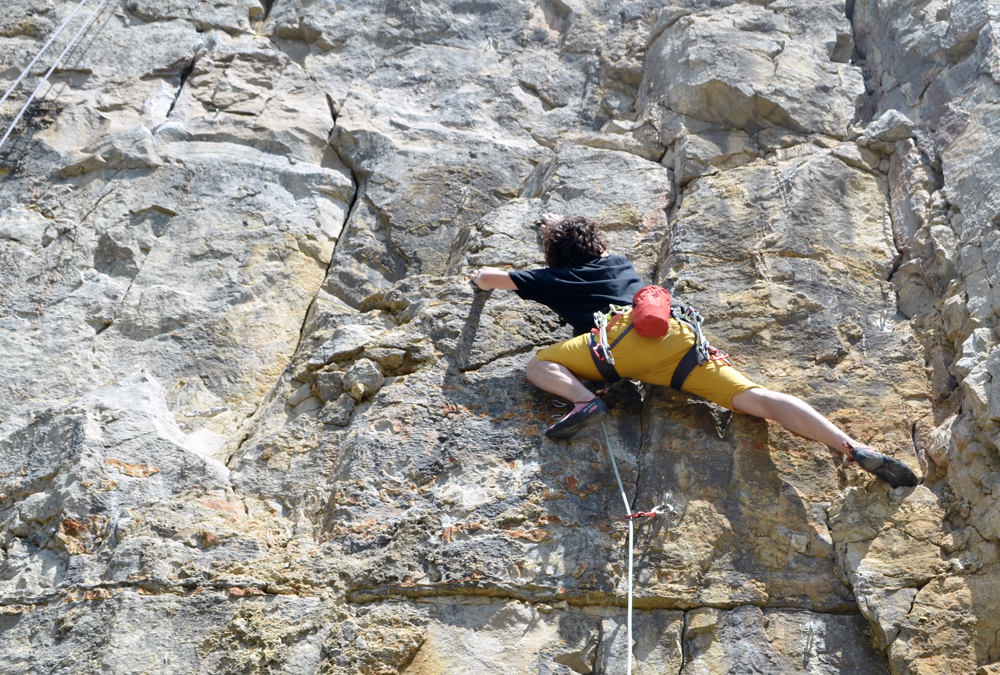 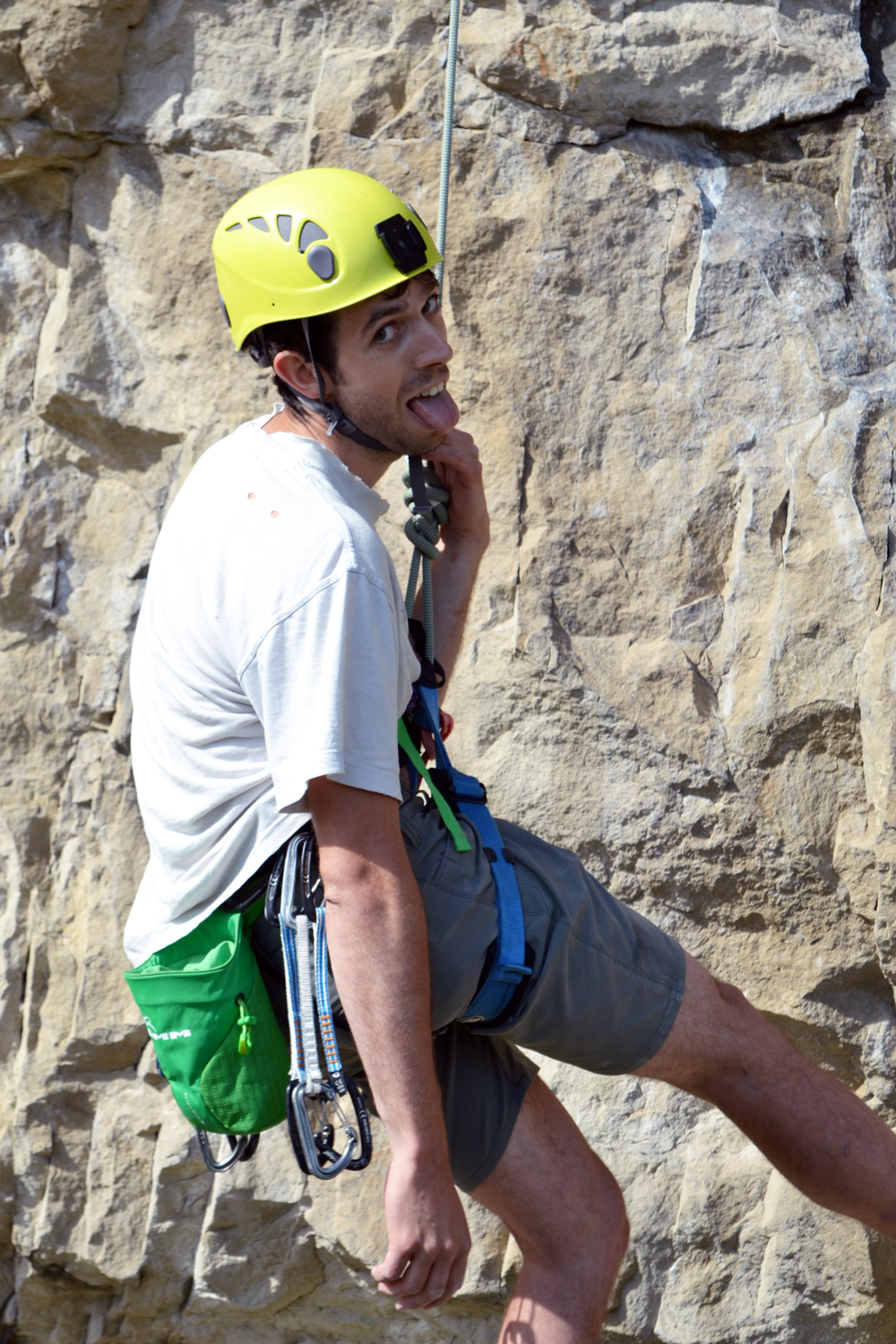 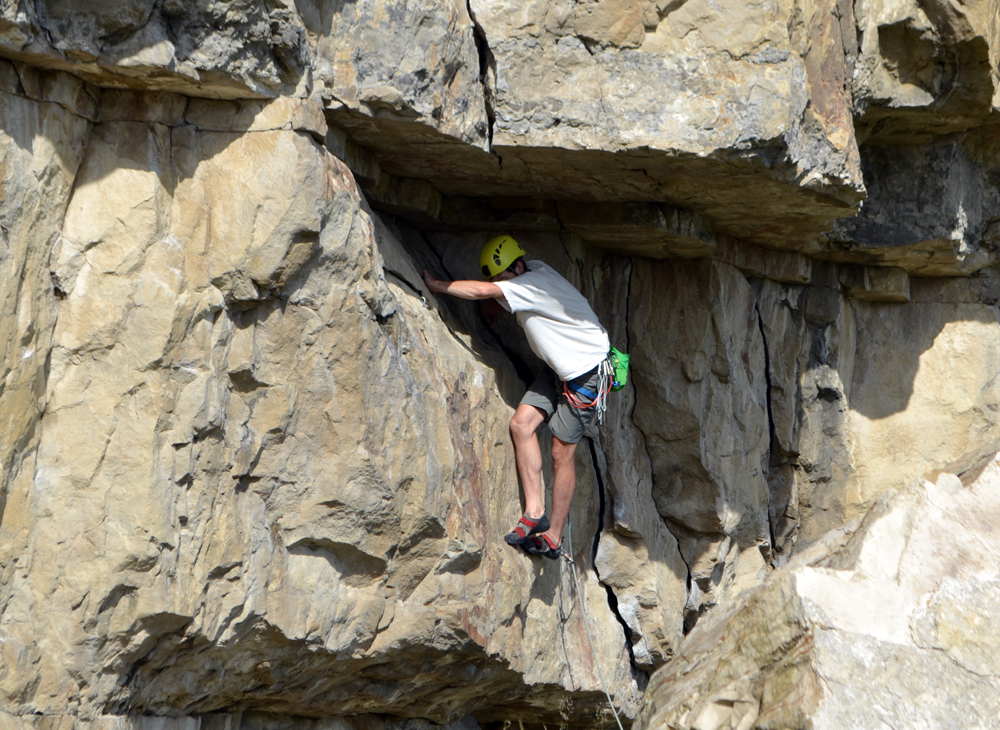 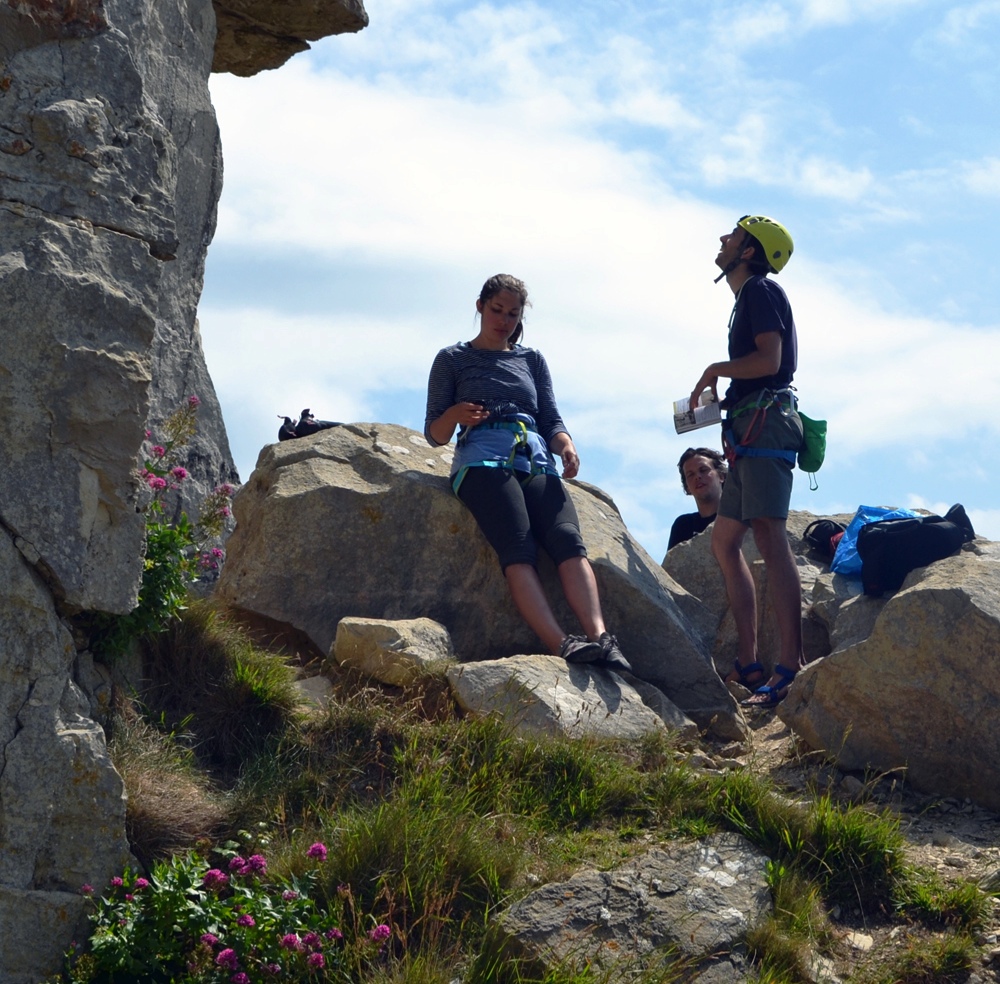 The other wonder of day’s climbing at Dancing Ledge is the little stone pool carved into the rock at the edge of the sea, which appears at low tide. A dip in the warmer salt water is bliss after a day getting sweaty and chalky hanging onto the cliffs. 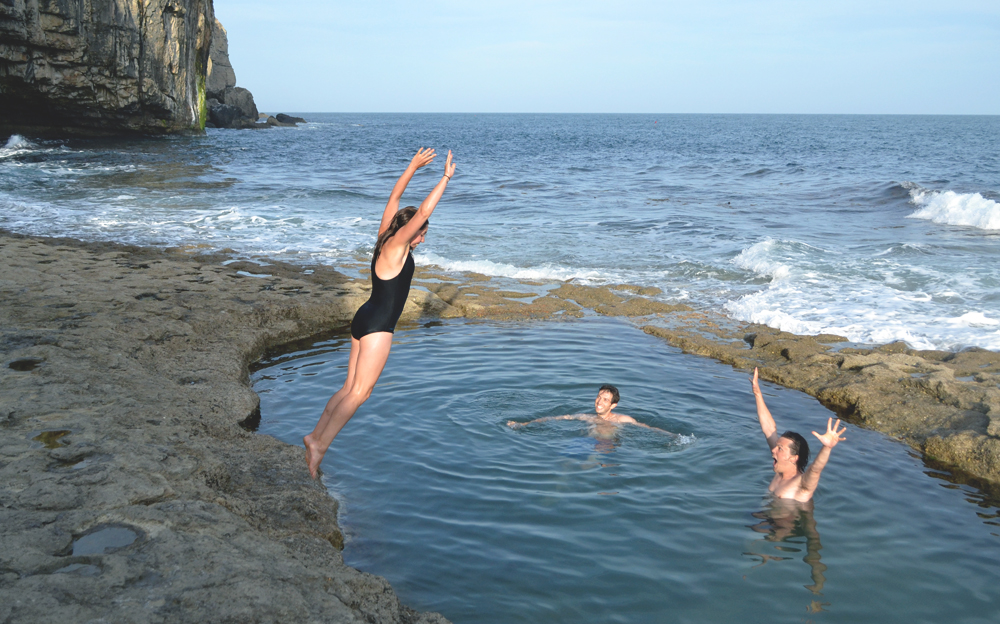 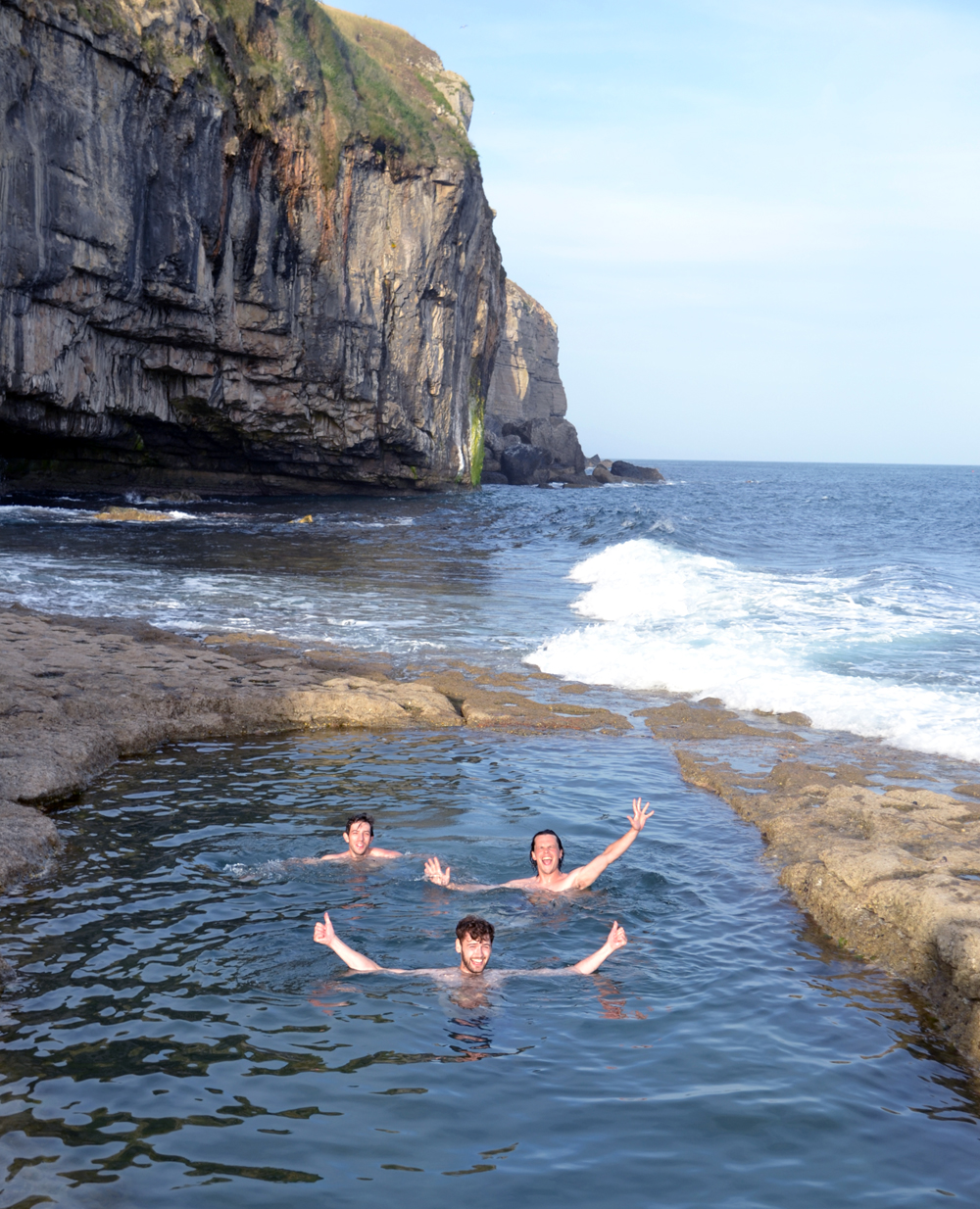 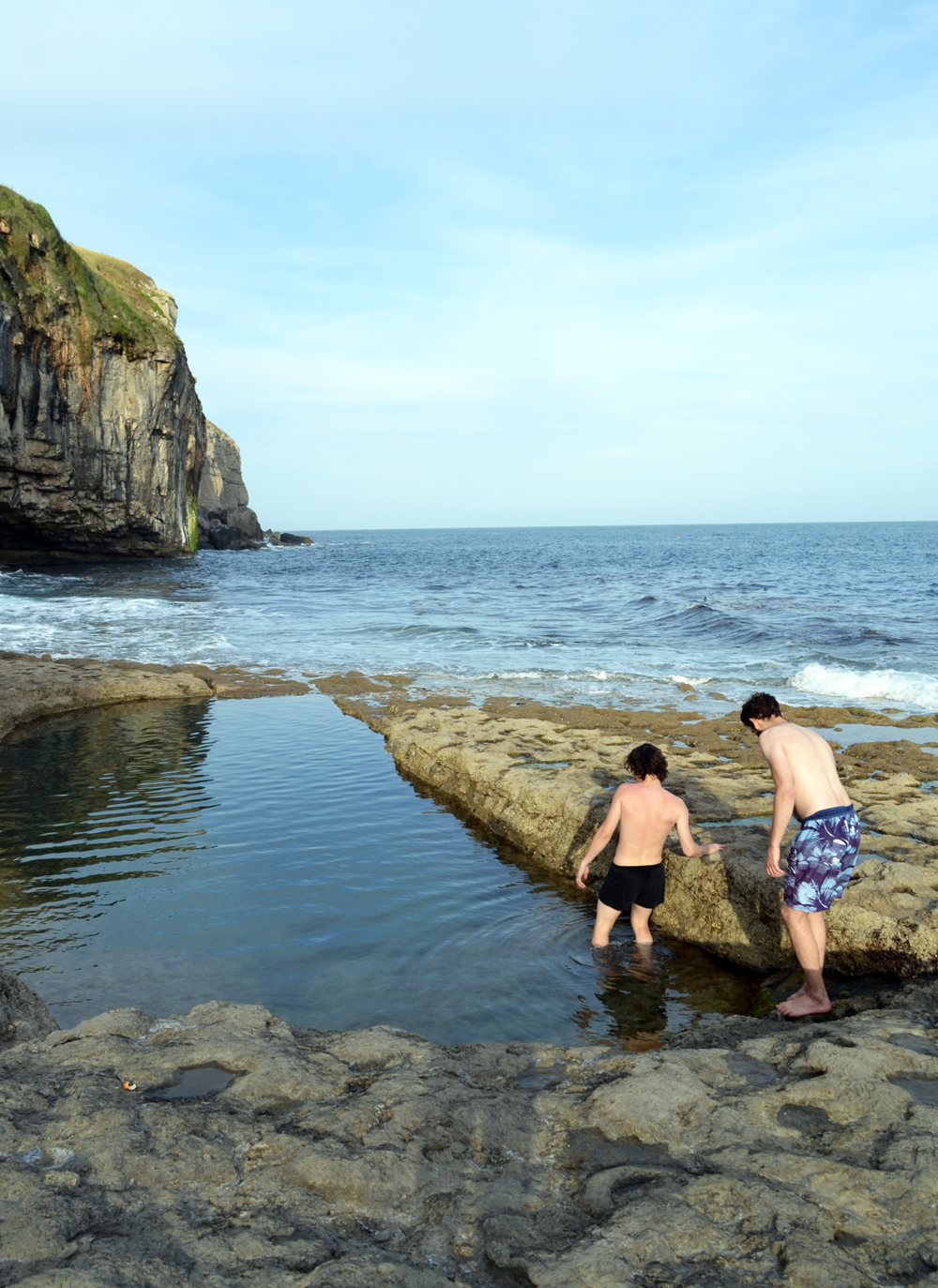 After the delights of Dancing Ledge we headed off along the coast path, laden with ropes, helmets and tents. As dusk fell we narrowly avoided banging into lowing cows and spotted tiny glow worms wiggling their dayglow bottoms at us from the grass – the first I’d ever seen. We headed to a little hidden cove Gavin had found on the map and set up camp at the mouth of a cave – very Famous Fiv. If you want to ruin campsites for yourself forever, try kipping under the stars with only a cliff drop and miles of ocean in front of your tent – having waves lull you to sleep and seabirds wake you up is an amazing experience. 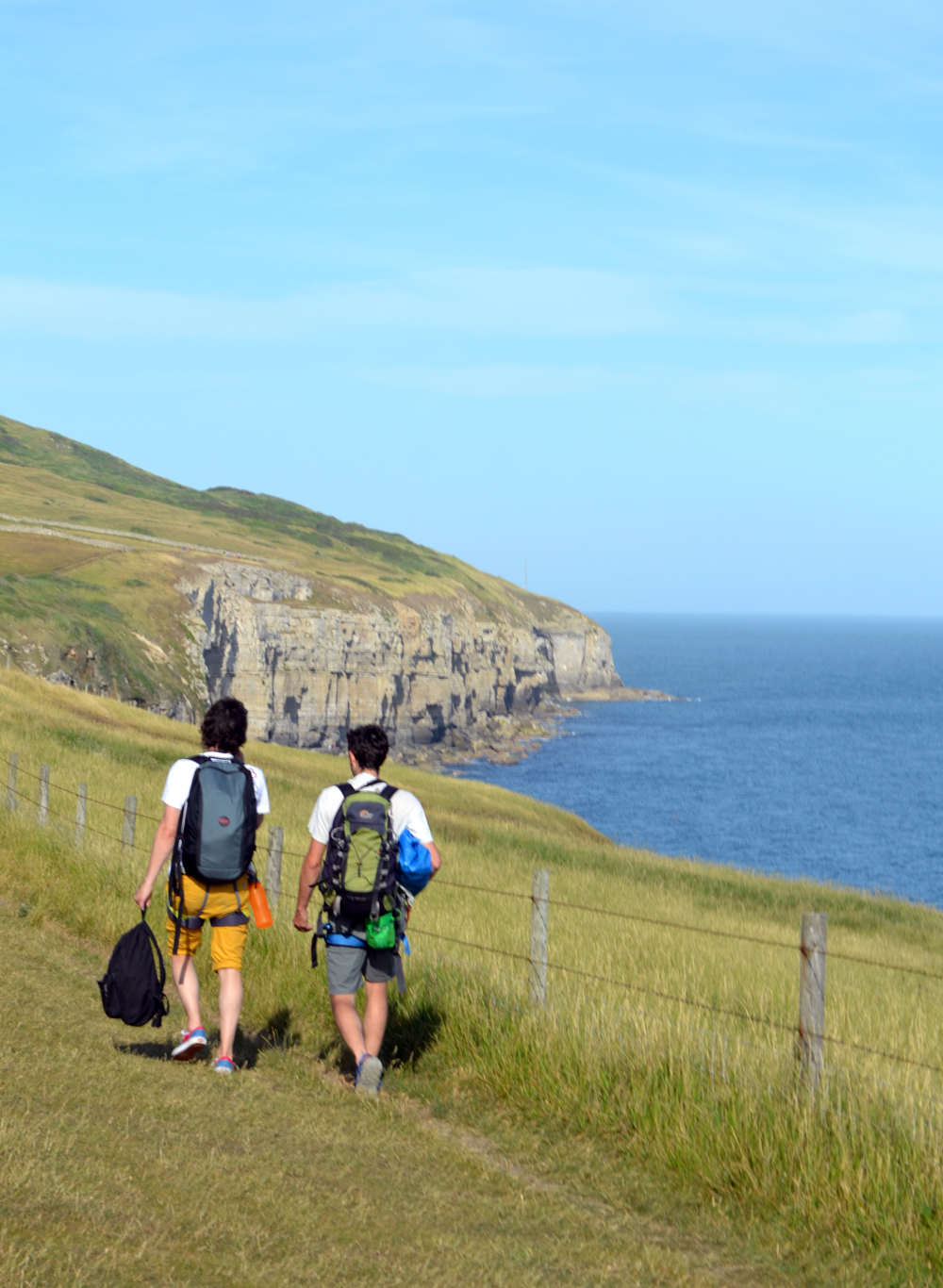 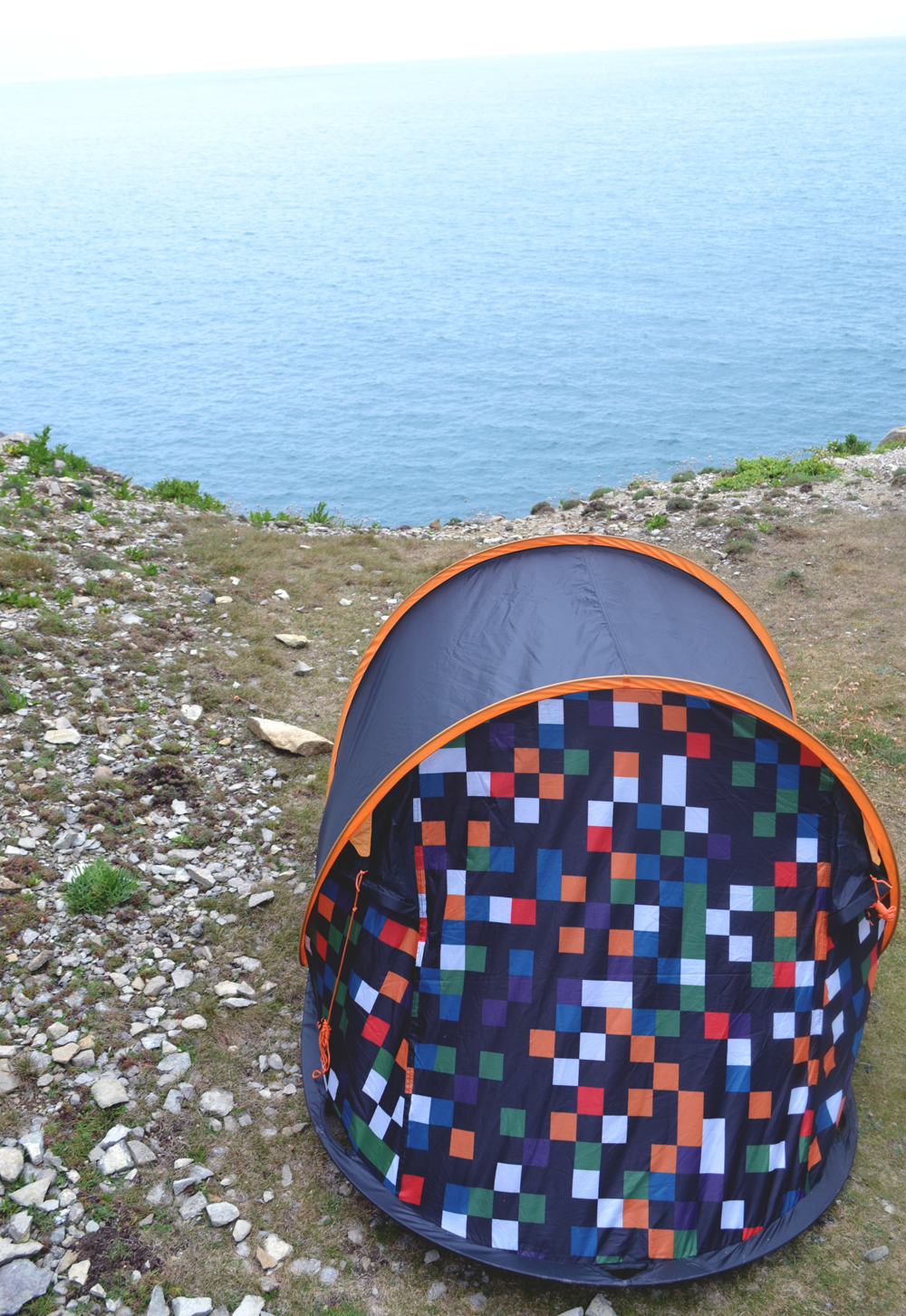 After a coffee and a last look at the view, unsuccessfully identifying the birds flitting about below our camp (“puffins! puffins!” Gavin assured us. Most definitely not puffins.) we hiked along the coast path to Winspit to tackle some higher climbs in very sultry weather. Winspit is a mile’s walk from the sleepy little village of Worth Matravers, home to the Dorset climber’s favourite pub, the Square and Compass. Happy rock lovers and myriad friendly dogs sit outside with pasties (the entire food menu goes likes this: 1. pasty. 2. pie) and insanely strong and well-deserved cider, soaking up the sunshine. 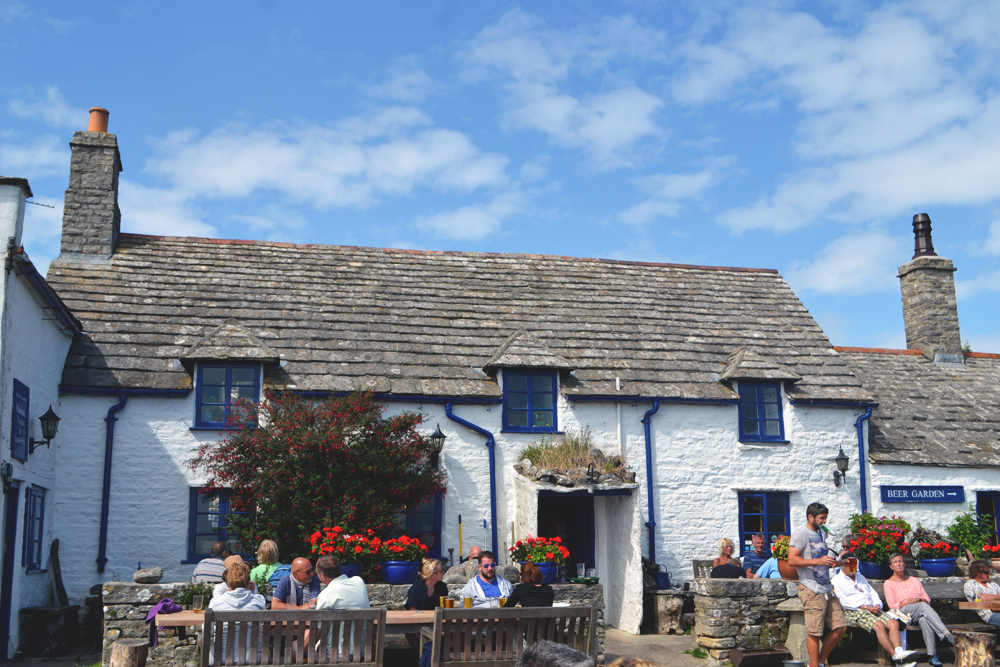