I’m very excited about this one: an interview with the uber-inspiring Jen Randall, multi award-winning filmmaker and the lady behind the lens of The Bothy Project, Operation Moffat and new, heart-plucking documentary Psycho Vertical, based on the autobiography of big wall climber Andy Kirkpatrick. 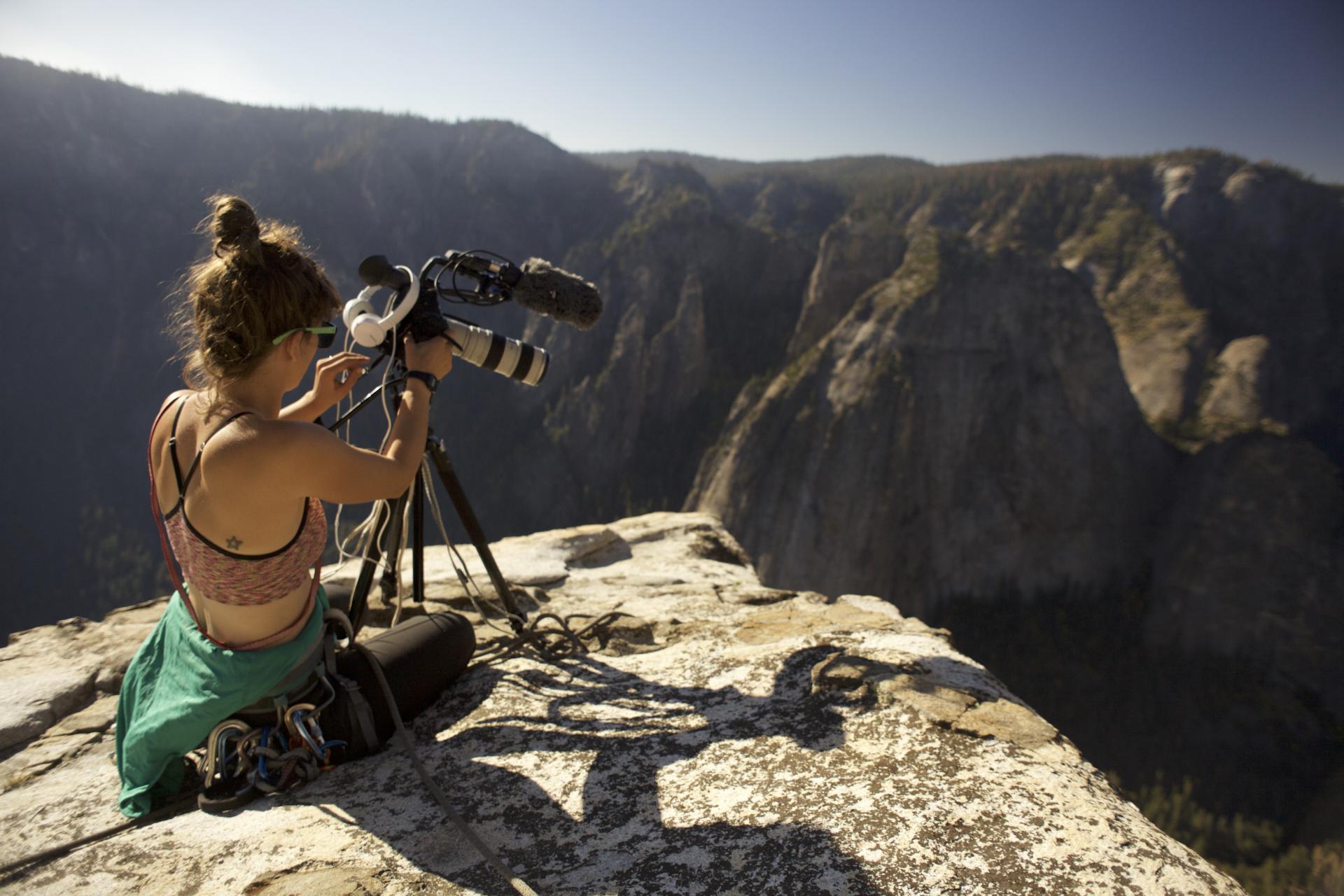 How did you first get into filmmaking?
When I was a kid I was really into writing stories and that continued way into highschool. I thought I wanted to become an actress, but then discovered what a director was and knew that was what I wanted to do. There’s no fixed way into filmmaking which is part of the beauty of it, for me it was by studying – drama and English all through school, then going to art school for 4 years and getting a degree, then on to film school for one year. After that I was suddenly out there on my own – I knew I wanted to make documantaries and I was totally in love with climbing… I got my first job with Alastair Lee as an assistant editor and I was on my way.

Your films Operation Moffat and The Bothy Project both portray inspiring women exploring the wild world. Why is that such an important message?
I got into exploring the female voice and perspective at art school, and first started making adventure films about women in 2012 when I made Push It – about a friend and I trying to climb El Capitan – at the time there were very few climbing films solely featuring women and I made it because I wanted to see it, and found reading about and watching other women climbing really motivating. There’s such an imbalance in the world’s media when it comes to how women are portrayed and how women are enabled to share their perspective on the world. In climbing, personally, I found a real, deep feeling of empowerment and I wanted to share that, and that simple idea got me noticed in adventure filmmaking – I think because it came from somewhere real, not just ‘hey I bet we’d get lots of hits if this film was about women’. If you look around you will see that so many women, myself included, have much less confidence and belief in themselves than they should – I really believe having adventures can shift that. 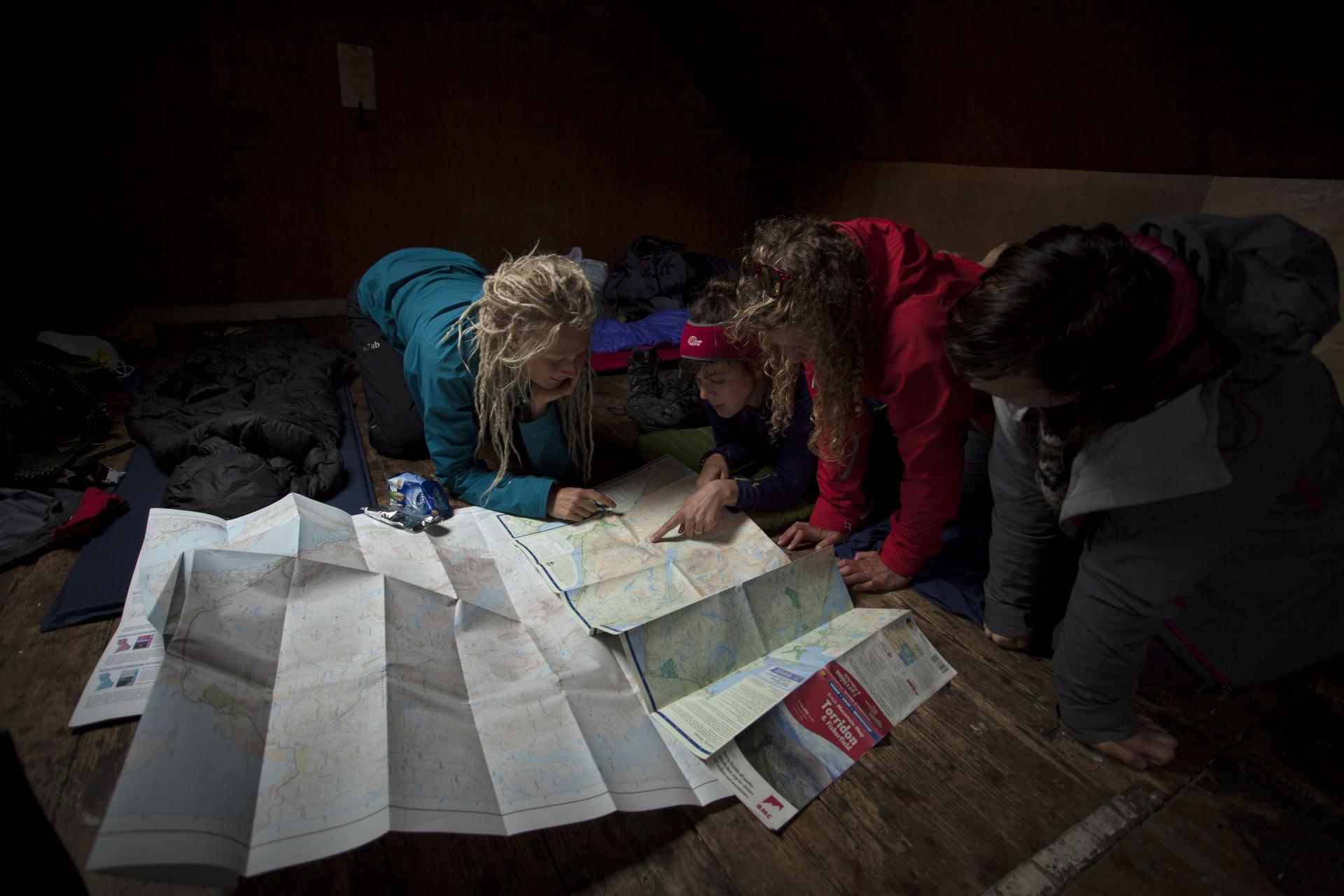 You mention on your website that your subjects have inspired you to take on your own wild adventures. Where are your favourite places to roam?
I am totally in love with the Northwest of Scotland. It feels so big, it has such history and it’s so flipping beautiful and moody. I grew up walking in those mountains with my dad, and recently my husband and I spent 8 months living in a little cottage right in the middle of the hills near Torridon – that was a really special time, so much empty space we barely had to share with anyone except some frogs, owls and otters. But we just moved to British Columbia so I’m hoping we’re soon to discover a whole new realm of favourite places.

What activities or elements of the great outdoors do you love the most?
Climbing, walking, swimming (it can be cold water as long as the sun is out) skiing, I’m up for most things. I’ve thought about why I love the outdoors a lot, and I think it comes down to that feeling of being in another world. For example, here in my living room I can see mountains from my window, and looking at them as they get snowy and knowing they’re the beginning of a huge, empty wilderness gives me goosebumps. The contrast of that world and my living room with heat and TV and a sofa… I love that. 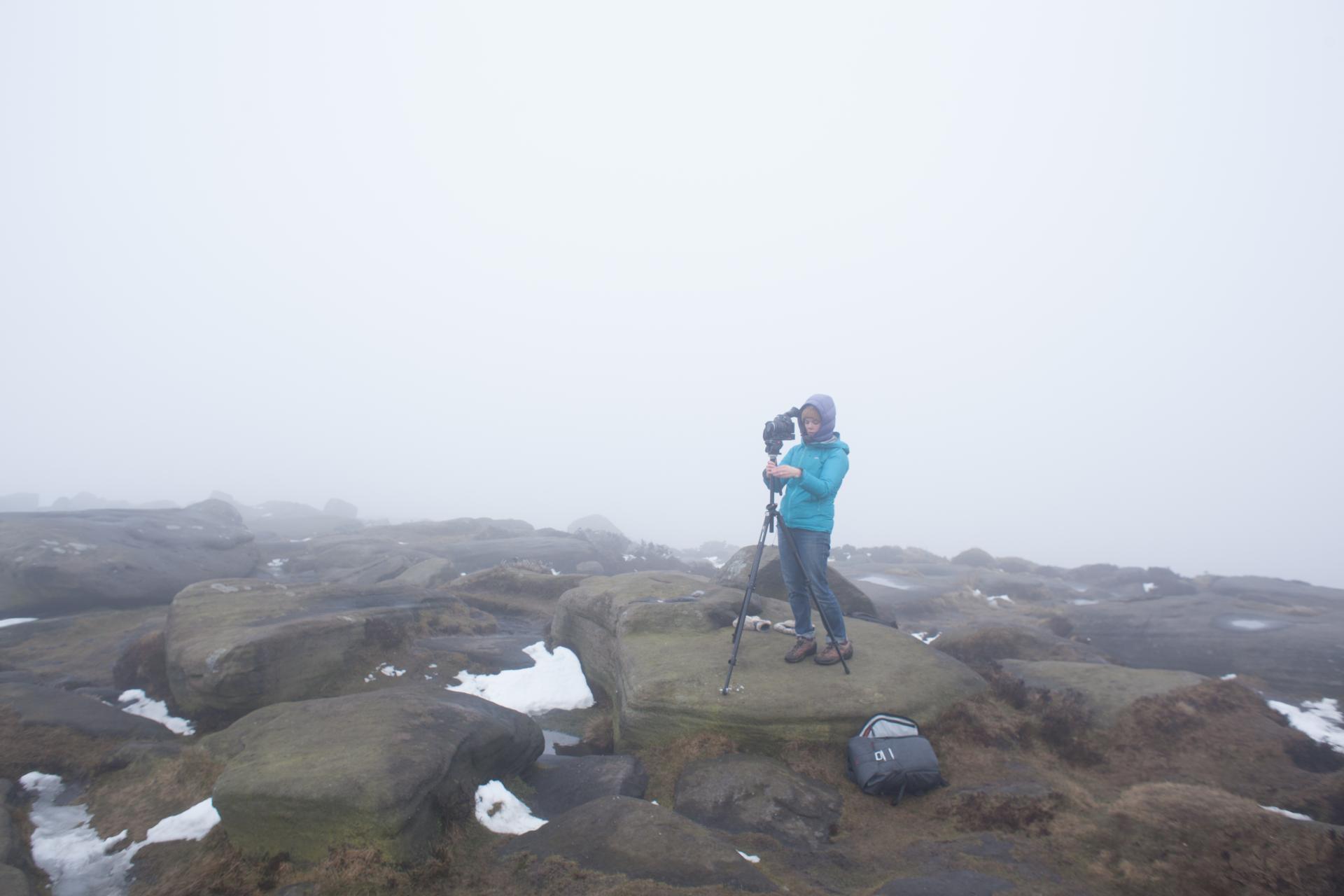 What made you want to tell Andy Kirkpatrick‘s story on film?
When Andy asked if I’d have a cup of coffee with him at a festival in 2014 and suggested we make Psycho Vertical into a film I knew immediately that I wanted to do it, and there were lots of reasons – I liked the book, I love working from a text, his story is much more than a climbing story – it’s rich and complex and delicate and raw – and it felt like it could be a big step for me as a filmmaker – a bigger project than I’d tackled before with potential to reach a bigger audience too. So it seemed like a big challenge that I knew I’d love working on, and if I did it well, could take me places.

How did you approach using such personal material?
I did a few things. I dissected Andy’s book over and over and over, honing in on the themes I wanted to focus on, quotes I wanted to use, moments I wanted to capture on the wall, etc. You can’t get a whole book into a 60 minute film so I had to decide what I could and couldn’t include. In the end, to me, it was really about fathers – Andy’s relationship with his father and making peace with that relationship, and Andy becoming a father and making peace with that too. So a big part of approaching the material was making it personal to me – focusing on what I felt was central to the book. And then getting to know Andy was a big part of making the film. I slowly developed the film over 2 years and during that time got more comfortable and familiar with Andy, so by the time we filmed the big interview we were all very used to being in each other’s company. I think that helps a lot – giving a project time and its team time to develop too. And then a lot of it was down to Andy, I wasn’t sure how involved he’d want to be at first, but he ended up giving me a lot of space and freedom to make the film I wanted to, so that was a big part of it too. 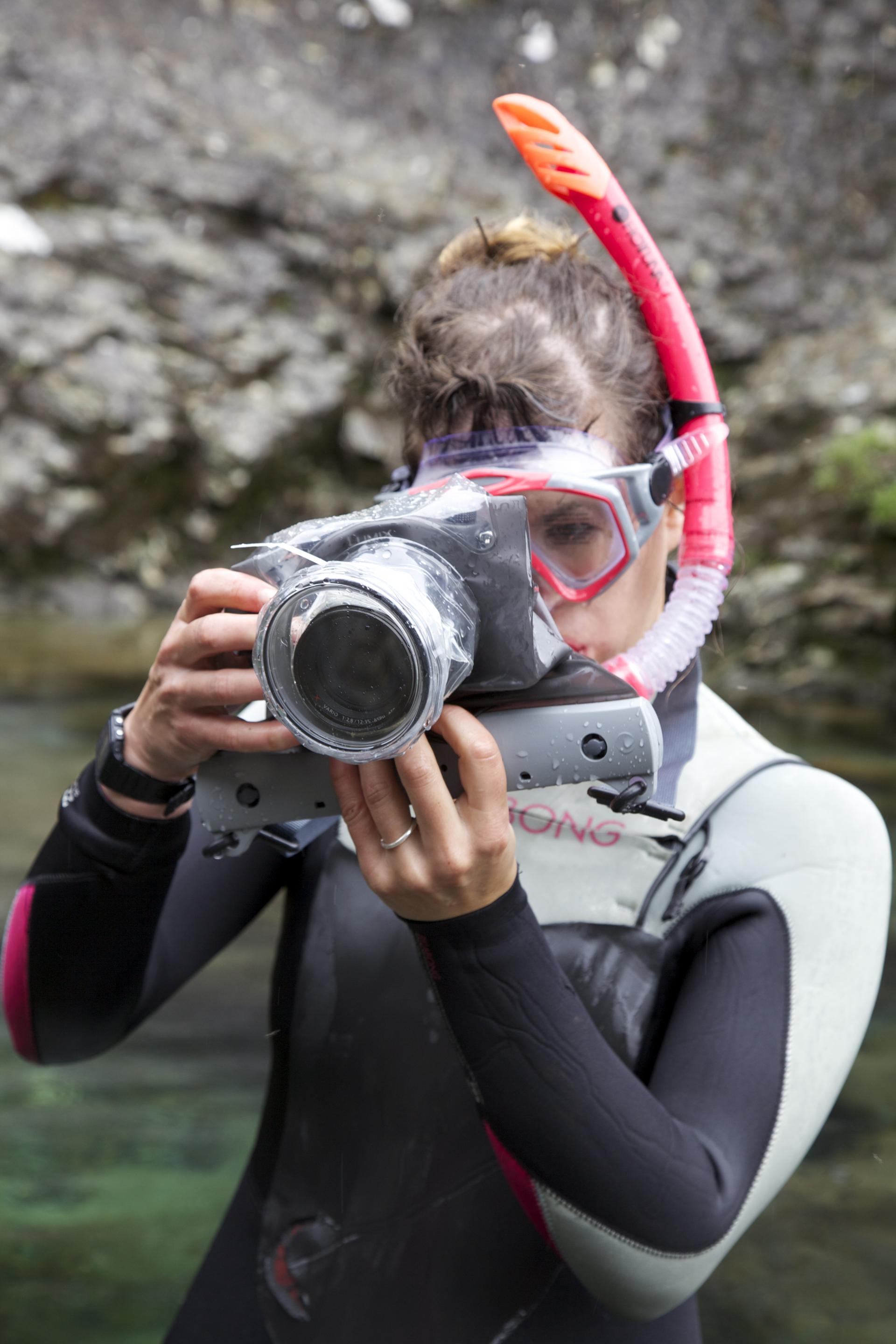 How did it feel to win Best Climbing Film in Banff?
Amazing. When you know you have a shot at winning an award at a festival you feel so vulnerable. It’s exciting to think about what you could say if you win, but you have to talk yourself down too and remember that not winning is fine – every jury is different and you don’t know what they’re looking for… I think I felt extra vulnerable at Banff because we’d just moved from the UK to Canada leaving our whole lives behind, and this was my first time at a festival with a big, feature film, and Banff is the biggest festival there is for adventure films. This year feels like my first year up there with the big guns, not being the little underdog anymore. Operation Moffat did so well at festivals so I feel like there is a certain expectation for Psycho Vertical, and that’s a new element of the festival experience for me. So winning at Banff felt like a total triumph. But then of course you quickly get back to reality – we went to Kendal shortly after and didn’t win a thing – there you go, that particular jury liked other films more, what can you do!

What advice would you give to young women keen to tell adventurous stories in film?
Just do it. There’s nothing stopping we women. Learn the skills, work out your style and story and approach and go for it. You’ll make some crap films, you’ll make some great ones, but you won’t make anything if you don’t get stuck in.

Find out more about Jen’s work at Light Shed Pictures and watch the trailer for Psycho Vertical here.