Just in time for International Women’s Day,here’s my interview with inspiring adventurer Elise Wortley, who is following in the footsteps of legendary female explorer Alexandra David-Neél in the Indian Himalayas with an all-female team. 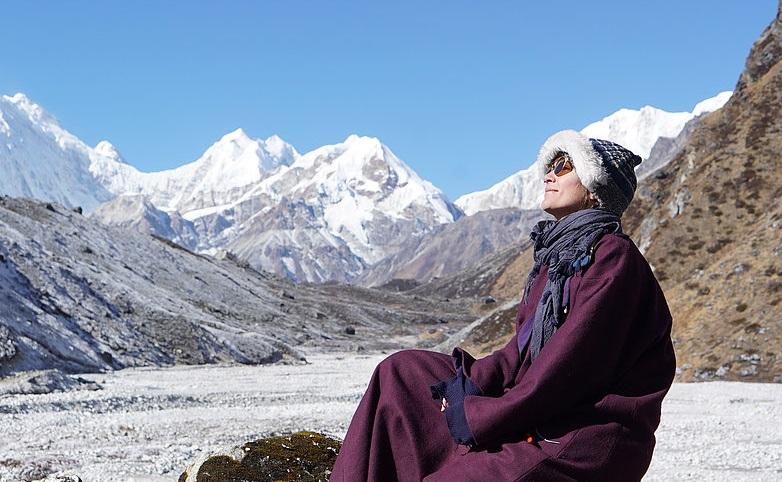 Meet Elise Wortley. She’s very likely to inspire you, and she was inspired in turn by explorer Alexandra David-Neel, the first woman to successfully enter Llasa in Tibet in 1924, after 14 years of trekking through Asia. Elise is following Alexandra’s epic journey as closely as possible, including only using the equipment that her idol did in the early 1900s – carved wooden sunglasses, a wooden frame backpack, wool layers, even Edwardian-style underpants. Elise is recreating the journey in stages with support from Exodus Travels – she’s just returned from Sikkim and has six more legs of the journey to go over the next few years, tracing David-Neel’s treks through India, Japan, Korea and Mongolia.

What about Alexandra David-Néel’s story inspired you to recreate her journey?
I first read Alexandra’s famous book My Journey to Lhasa when I was 16, and I couldn’t get her story and what she had achieved out of my head. She must have had so much strength to journey through Asia for 14 years, but more so to walk away from her life in Europe. Women just didn’t do that sort of thing in the early 1900s – they stayed at home and had children, which is why her story is even more inspiring to me. I’ve always looked up to women who have achieved amazing things through their own sheer determination and willpower. It makes me think if she can do it, then so can I, and so can anyone! 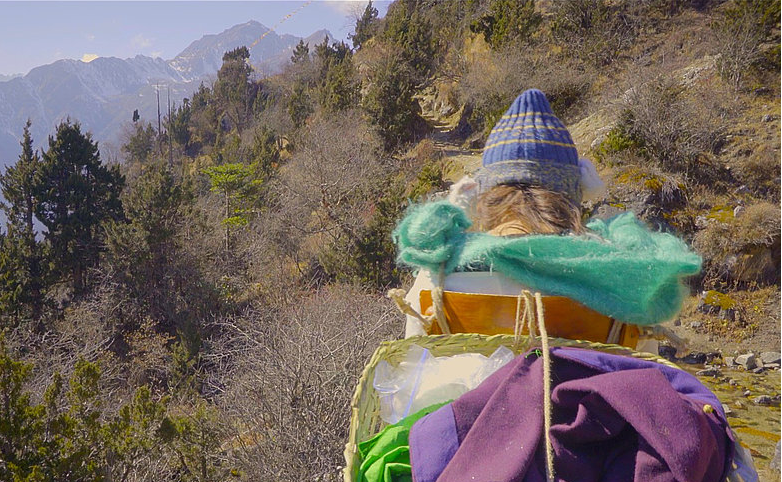 How did you find the courage to decide to leave your London life behind and take on that challenge?
Alexandra’s journey to Lhasa took her 14 years to complete. Unfortunately it just wasn’t possible for me to leave for 14 years! So I came up with another plan that would enable me to cover most of her journey in smaller chunks. My original idea was to re-create Alexandra’s journey to Llasa. However, with modern government restrictions in what is now Chinese Tibet it wasn’t possible to follow her path there, so I came up with a different plan.

I decided to flip the whole journey round, and start at the very beginning. She travelled through seven countries on her epic journey so my plan is to follow her footsteps in stages with one big trek in each of the countries she went through, and I started with the place where she got her very first views of Tibet – Sikkim in northern India.

So in answer to your question, I haven’t totally left my life behind, as I’m now back and planning the next stage, with the hope that one day I’ll be able to re-create the final leg of her journey to Lhasa.

Although it was nerve-wracking to leave originally not having done anything like this before, it was returning that I found difficult. In the mountains I had no modern equipment, which meant no phone, no internet, no news and no contact with anyone apart from those around me. After the initial frustrations of not knowing the time or being able to take photos, I started really appreciating not having modern technology.

What are the biggest obstacles to living like Alexandra did in the 1900s?
My main challenge was the cold. People told me to expect the worst, and they were right – at one point we were down to -15ºC. I would wake up in my home-made tent with frost all over the inside of the tarpaulin and covering my blankets. There was so much ice, that the blankets actually cracked every time I moved. This also meant that each morning when the sun came up, all the ice melted and I would be drenched – this really isn’t good when you’re 5,000 metres up a mountain.

I’m still in awe of how Alexandra managed to live like this for so long, especially through the freezing winters. At times Alexandra didn’t even bother to put her tent up, she just slept in the snow. 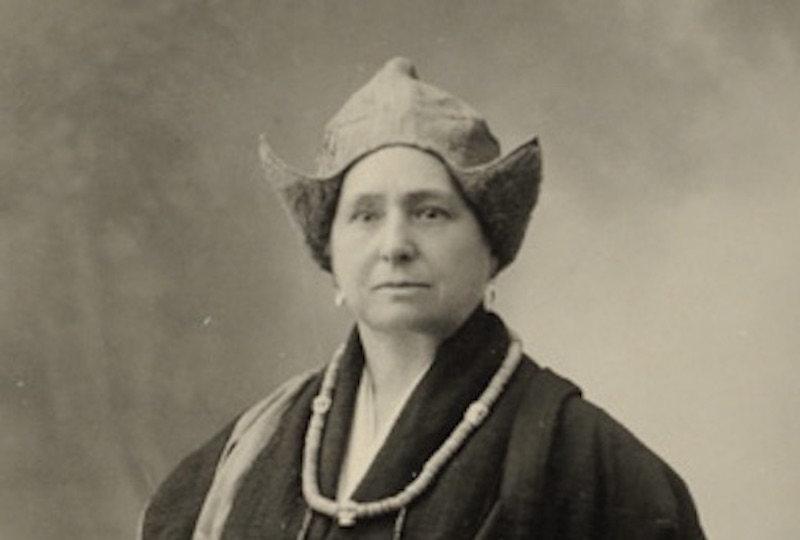 You went with an all-female team – what was that like?
One of my main motivations to do this expedition was to highlight women in adventure travel. I also wanted a focus on female guides around the world as well as trying to inspire as many other women as I can to put themselves out of their comfort zones and take on a challenge.

The interesting thing is that I was told by numerous people that I would never find a female guide in northern India. After a huge search I managed to find a local leader called Jangu, who couldn’t have been more amazing, and was an absolute inspiration to be around.

I was also joined by an incredible cinematographer, Emily Almond-Barr, who documented the journey. Emily runs her own production company with the main aim of getting more women onto film sets, and her attitude and approach to her work was inspirational.

I don’t think I would have coped anywhere near as well if I didn’t have these two remarkable women there to support me. I won’t go into detail but there is a lot of personal stuff to discuss when you’re up in the mountains with no proper bathroom! We formed such a strong bond that you could only get from adventuring with other women, and it made me realise how important it is for women to stick together and support each other rather than compete.

What will be your lasting memory of the adventure?
Without a doubt reaching the basecamp of Mt Kangchenjunga, the third highest mountain on the planet. We all had such a phenomenal sense of achievement running through us, from having conquered all the long days of walking and all the mental and physical obstacles that we met on our way.

It was a special moment for me, reaching the highest and most beautiful part of our trek, but I had no idea just how important this place was for our leader, Jangu. We were as close to Mt. Kangchenjunga as you can get from the Sikkim side, and it’s very rare that local people get to come here. Mt. Kangchenjunga is a sacred mountain for the people of Sikkim, it’s seen as the mother deity, and is so revered that climbing the mountain from the Sikkim side has been banned since the 70s. Jangu changed into her traditional clothes to recite a prayer for her late father. It was incredibly moving for all of us. Leaving a prayer for him here was one of the greatest respects she could pay to him and something she never thought she would be able to do, so you can understand just how significant this moment was. 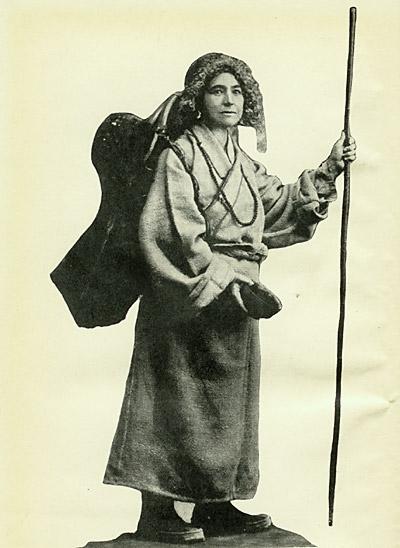 How have you kitted yourself out like an early 20th century lady explorer?
It was near impossible to locate everything I needed in London! Yak fur tents just don’t seem to exist on this continent. At one point, in a state of panic, I was actually walking around charity shops searching for fur boots. There is a very famous image of Alexandra standing proud in her traditional clothes she wore on the final leg of her 14 year journey to Lhasa. I decided to base my clothing on this photo, plus whatever information I could gather from her books. Anything that wasn’t mentioned, I just tried to find out what the 1920’s equivalent would be. For example, the book is quite vague and only mentions that she wore “cotton undergarments” under her traditional coat, so I got myself the closest resembling cotton bra and pants I could find to those from 1911! The bra was surprisingly comfortable, but I have to say, the pants were not a good look.
I also didn’t have much luck finding a traditional wooden backpack, but after looking more closely at images of them, I realised that they were basically backwards chairs with their legs cut off, so I just made one myself! 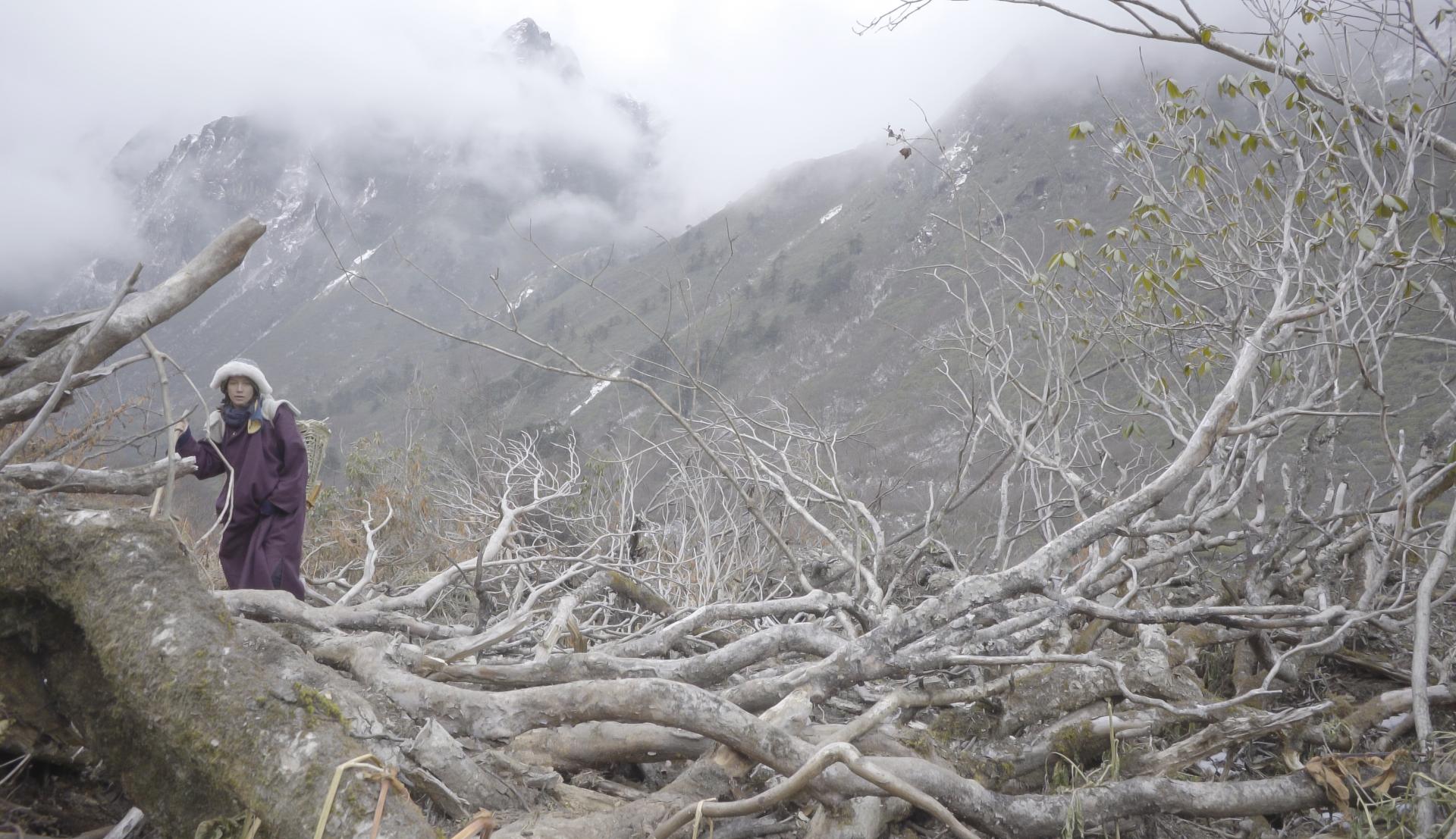 You’re raising money for Freedom Kit Bags. Why did you choose to support them?
Freedom Kit Bags is an amazing charity that empowers women and girls in rural and low-income areas of Nepal by providing them with a reusable kit containing everything they will need during their period. These Kit Bags enable women and girls to escape the cultural stigma and physical constraints of menstruation by improving their health and giving them the freedom of movement and uninterrupted education.

Periods are still such a taboo subject even here even in the UK which is pretty unbelievable and it really needs to change. It’s important that we all, women and men, talk more openly about these topics and make it part of everyday conversation. 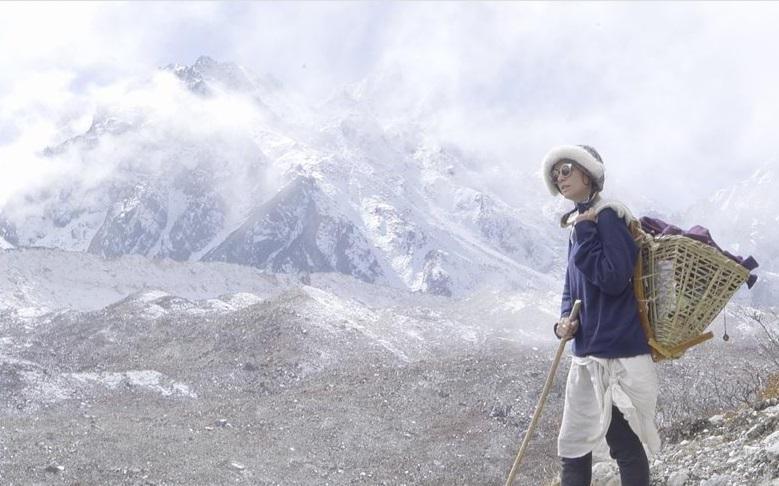 What advice would you give to other women keen to take on an epic journey like yours?
I’ve always been an anxious person, a combination of not having the confidence to take on this challenge and the devil on my shoulder telling me it was a ridiculous idea held me back. For a long time I couldn’t even picture how I would actually trek through the Himalayas wearing clothes from the 1920s!

This experience has taught me that no matter how silly you think an idea is, or how unreasonable it may seem, just go with it. My whole life I’ve worried about what other people think. This project has made me realise that the opinions of others should never discourage you from following an adventure or dream. So grab some friends and go on an adventure – it really will change your life. 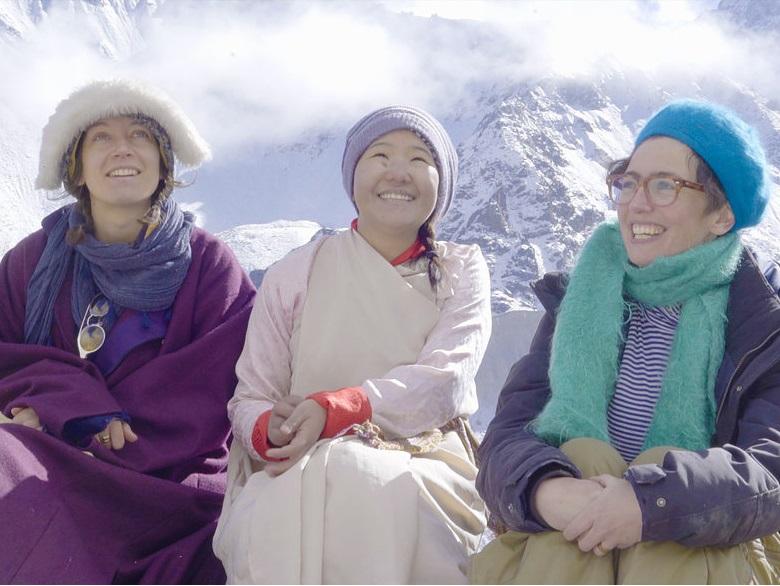