This is the story of a 300km journey across the wilderness from Norway to Sweden as part of the Fjällräven Polar 2019 expedition, crossing the tundra, cuddling huskies and proving that there’s an Arctic explorer hidden inside everyone. 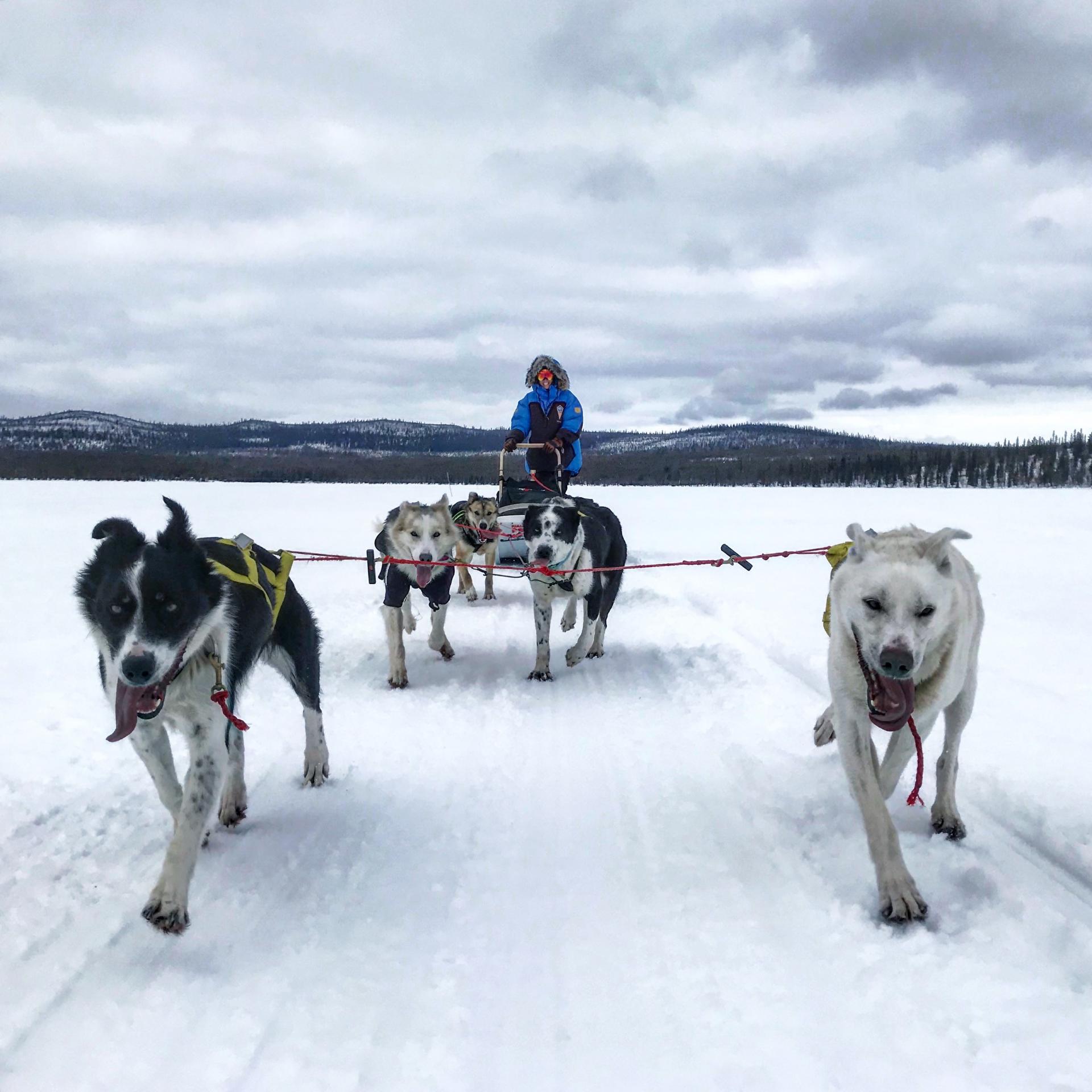 Fat snowflakes were falling on my face, settling onto my eyelashes. The cold sky above me was framed by tall, dark spruces. I felt surprisingly warm, cocooned in a sleeping bag on top of a mattress of branches and hard-packed snow. I could have stayed there longer, watching the snow slowly fall, but the huskies had started to howl. It was time to hit the trail.

This, my fellow adventure lovers, is the Fjällräven Polar, a challenge like no other. Each year, Fjällräven takes ordinary people from all corners of the globe and sends them on an extraordinary journey – a 300km route across the Arctic wilderness from Norway to Sweden, travelling by dog sled each day and camping in the snow each night. Participants learn to mush their own team of six huskies, to care for and feed their dogs and to work as a team to survive harsh conditions and temperatures that can plummet to -20.

Fjällräven have been making timeless and responsibly made outdoor clothing and kit since the 1960s, and dreamed up the Fjällräven Polar as a way to show what normal people can achieve in extreme conditions – with the right kit and training. The event champions the incredible wilderness of northern Sweden, the country the brand hails from and is still based in. Each year, thousands of applicants from across the globe apply to join the Polar, and 30 chosen adventurers arrive in Norway to start the expedition. This April, I got to be one of them.

Fjällräven had promised us “that with guts and gusto, advice and guidance from experts, anyone could take on the challenge of Fjällräven Polar.” When all of the participants had descended on Scandinavia from around the world, we were put into teams of four, schooled by experts on how to thrive in the extreme climate we were about to face, and how to use the kit that Fjällräven had provided each would-be musher with.

Wondering why our gear all a bright ocean blue? Blue is apparently one of the easiest colours to make out in a blizzard. As I tried on my enormous snuggly parka, snow boots and special long-john winter knickers, I started to wonder what challenges were waiting for us out in the wilderness. Flying to Tromsø, I looked down from the plane at the miles and miles of empty white tundra below, and began to have an inkling.

If I’d wondered quite how wild we’d be sleeping on the journey, I found out on the second night of our training at Camp Tamok. We learnt how to pitch our tents in snow, digging down with shovels to create anchors for pegs. We were dressed in Fjällräven’s finest polar layers, but as night fell temperatures quickly dipped below freezing. Inside our tent (dubbed Tentingham Palace for its queenly beauty) I was finally warm enough to drift off to sleep when my tent mate Dean shook me awake. Above us, the night sky was laced with green ribbons of light – the aurora borealis. I hadn’t put on enough layers in my haste to see it and I was soon shaking uncontrollably, but it was worth it to watch the northern lights shimmering over our tiny torch-lit tents.

The first day of the Polar expedition was a sensory overload – we met our dogs, packed our sleds and rushed across the starting line. I’d had all the advice, but I was pretty sure my guts and gusto levels were low. And if I’d ever thought husky sledding looked relaxing, I was wrong – driving your own team as a beginner is hard work. The dogs knew what they were doing but I definitely didn’t, and I had to learn fast to steer the sled, jog desperately up hills and not fall off as we careened round bends (reader, I fell off). We stopped to feed our dogs and wolf down re-hydrated ration packs and then we were off again. When we finally reached our first camp we needed to feed and water our dogs, then ourselves, then erect our tents as the sun set and turned sky and snow gold and red, which I admired through a fog of exhaustion. 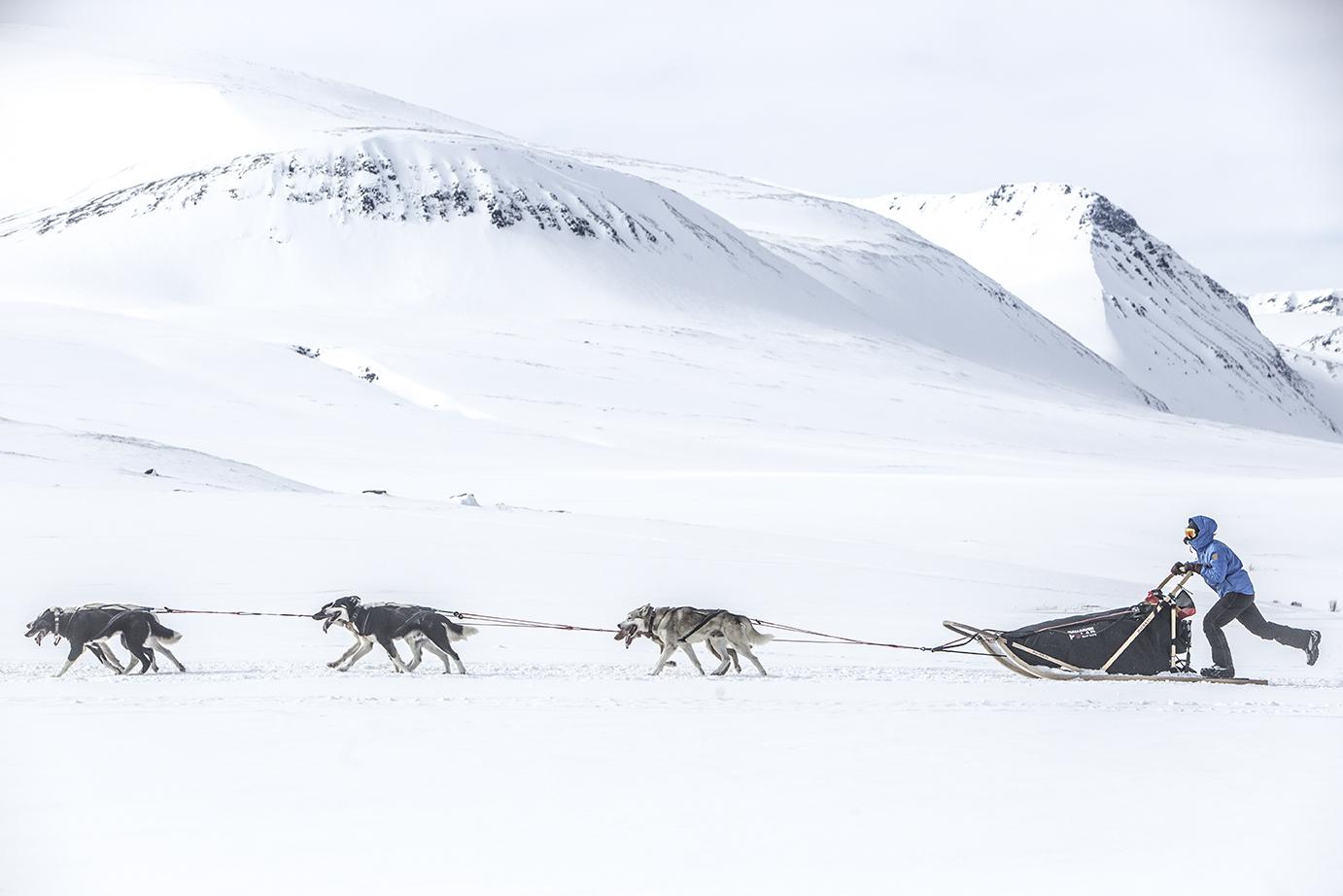 Tales from the trail

From the the second day of the Fjällräven Polar journey, everything magically came together. There’s nothing to describe how it feels to rush across a wide-open frozen lake, dogs padding almost silently on the snow. I felt more confident standing at the back of my tail-wagging pack as they raced along the trail, watching how the landscape was changing as we raced through Norway and across the border to Sweden. First we raced through a tundra of white snowy peaks and permafrost as far as the eye could see. Then the landscape softened into the huge lakes and silent forests of Sevujärvi, where the tracks of deer and wild birds dotted the snow.

We were so far from civilization and so close to the glories of the wild, learning to survive and thrive in a strange and powerful landscape, to set up tents on frozen lakes, to boil snow for water, care for working animals and for each other. In such an extreme and testing environment, having a team who worked together tirelessly to cover miles, get chores done and look after each other was a huge comfort. By the evening of day two, as we chowed down on ration packs and hot chocolate together, my gusto levels were back on track. 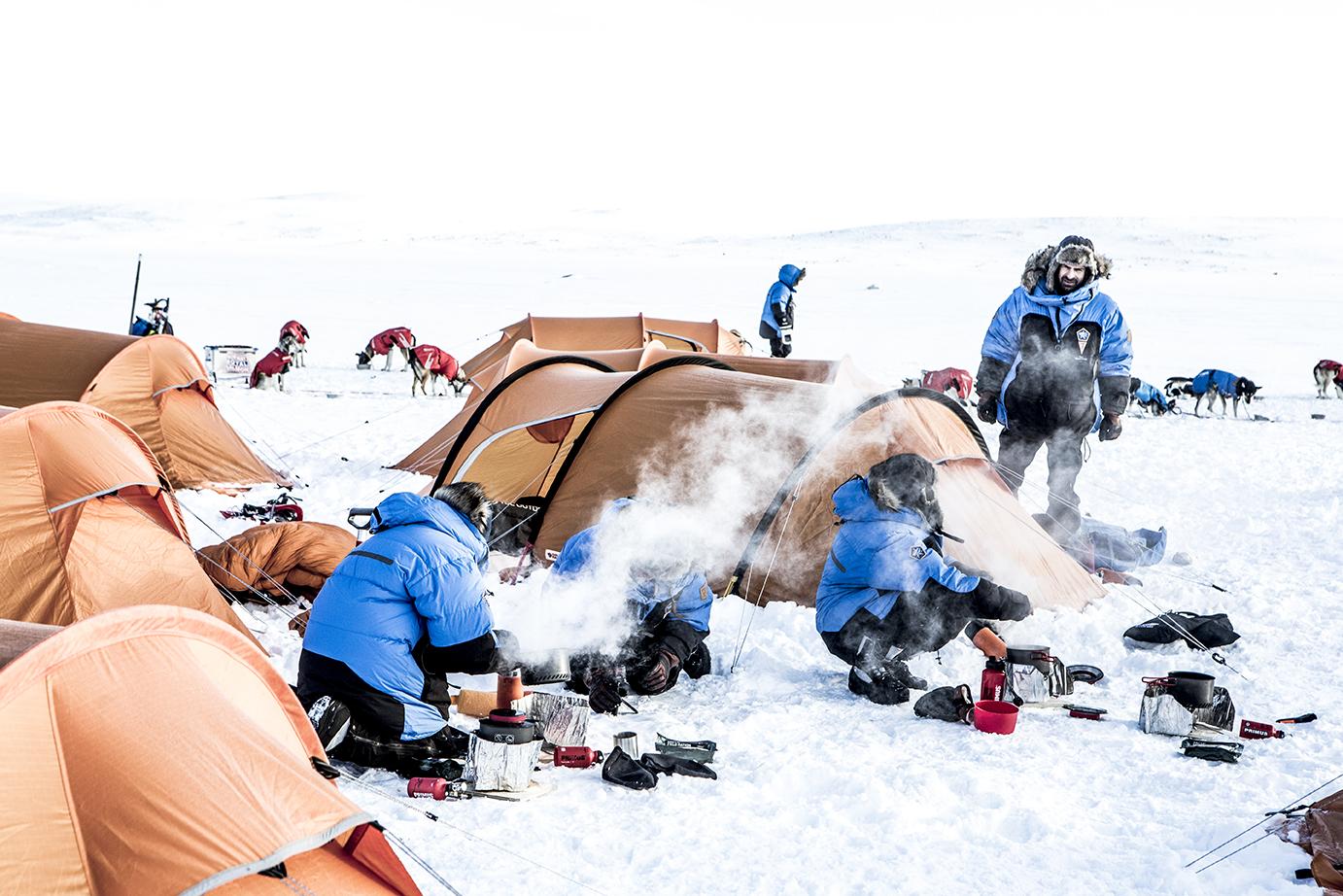 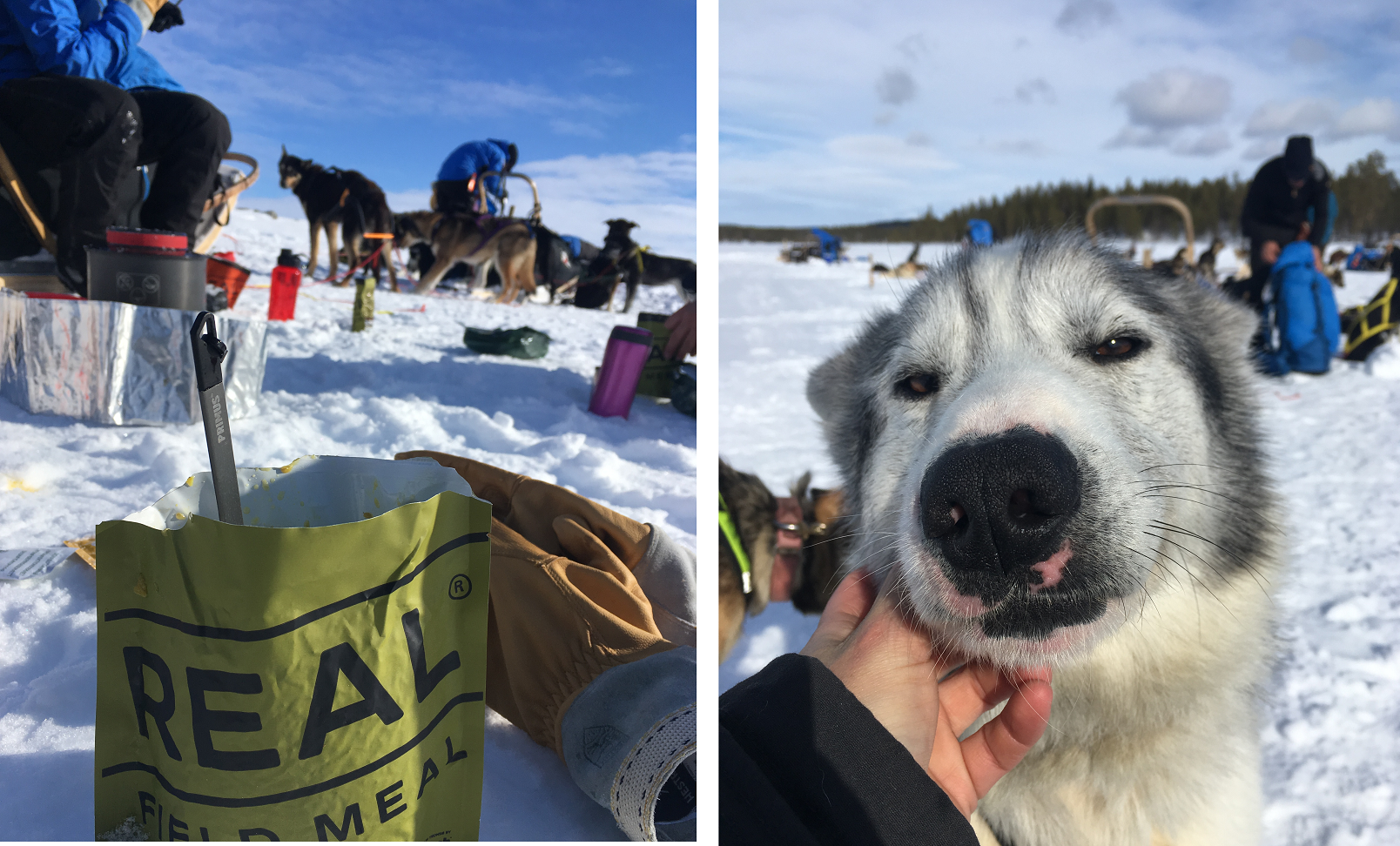 Some of our most supportive team members, of course, were the four-legged kind. I’d expected to meet working dogs and ours were certainly that – fit and healthy and able to run happily for endless miles. But our team’s dogs, who belonged to our brilliantly supportive mushing guide Roy Jensen Ugseth, were also charmingly friendly and always keen for a cuddle. I fell in love with Shaggy Dog, who had to wear hilariously small booties due to his sensitive paws. Learning how to look after these dogs was a privilege, and my favourite part of the day was when we were waiting to start the journey and they’d crowd around my sled and paw at my legs, raring to be off.

Out in the elements

On our last night in the wild, our tents stayed packed in the sleds. Instead, a survival expert was on hand to teach us how to dig a snow shelter to sleep in. We tramped around in snow shoes to make a half igloo-style shelter with a wide bench in it, then collected springy birch branches to make a mattress and laid our waterproofs and sleeping bags on top. I did some star jumps in my long johns to warm up before climbing into my sleeping bag. I expected to lie awake, feeling the cold nip at my nose (the only part of me exposed to the cold) but I fell asleep immediately, and only woke up at dawn as snowflakes began drifting down onto my face. 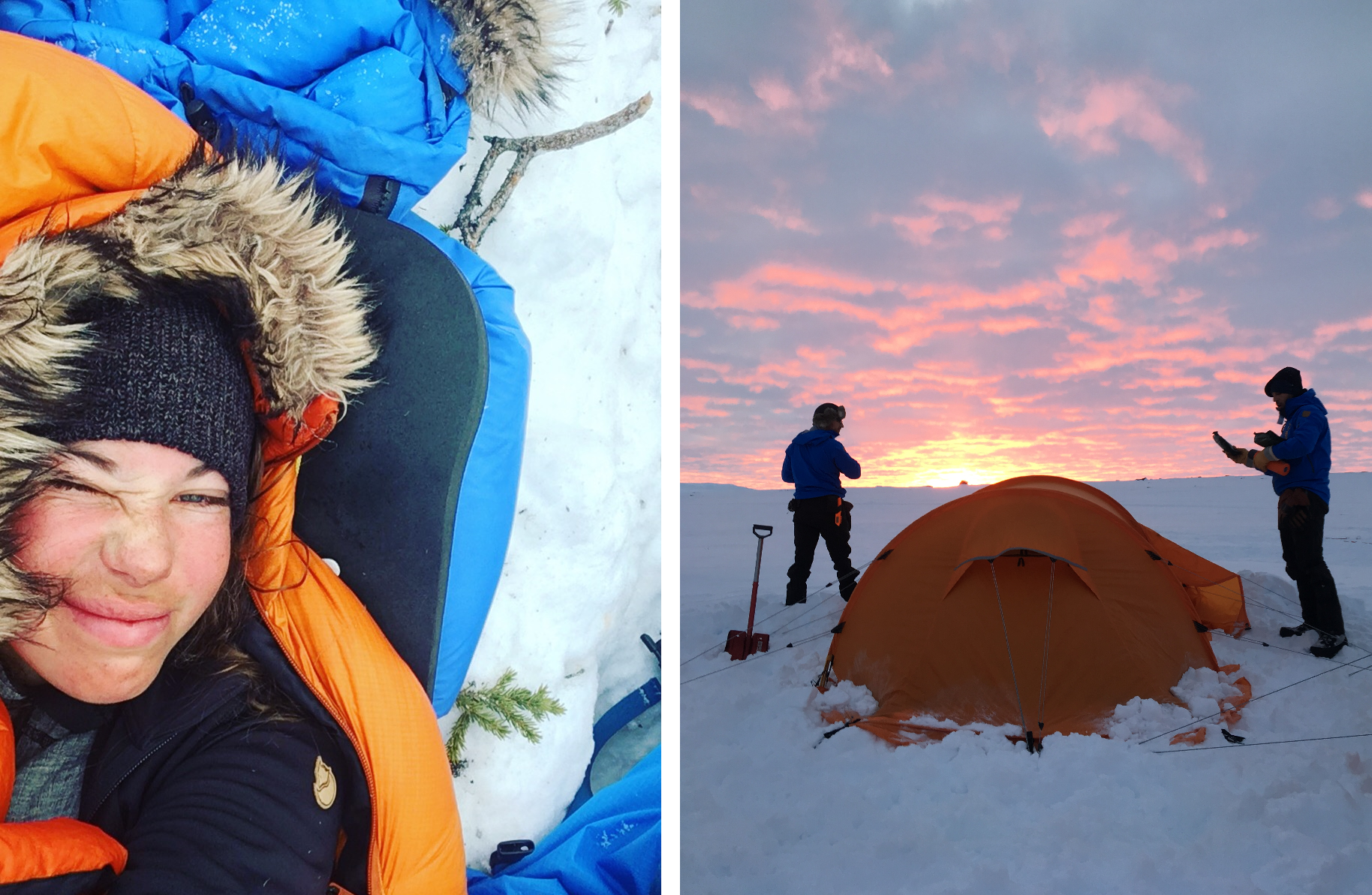 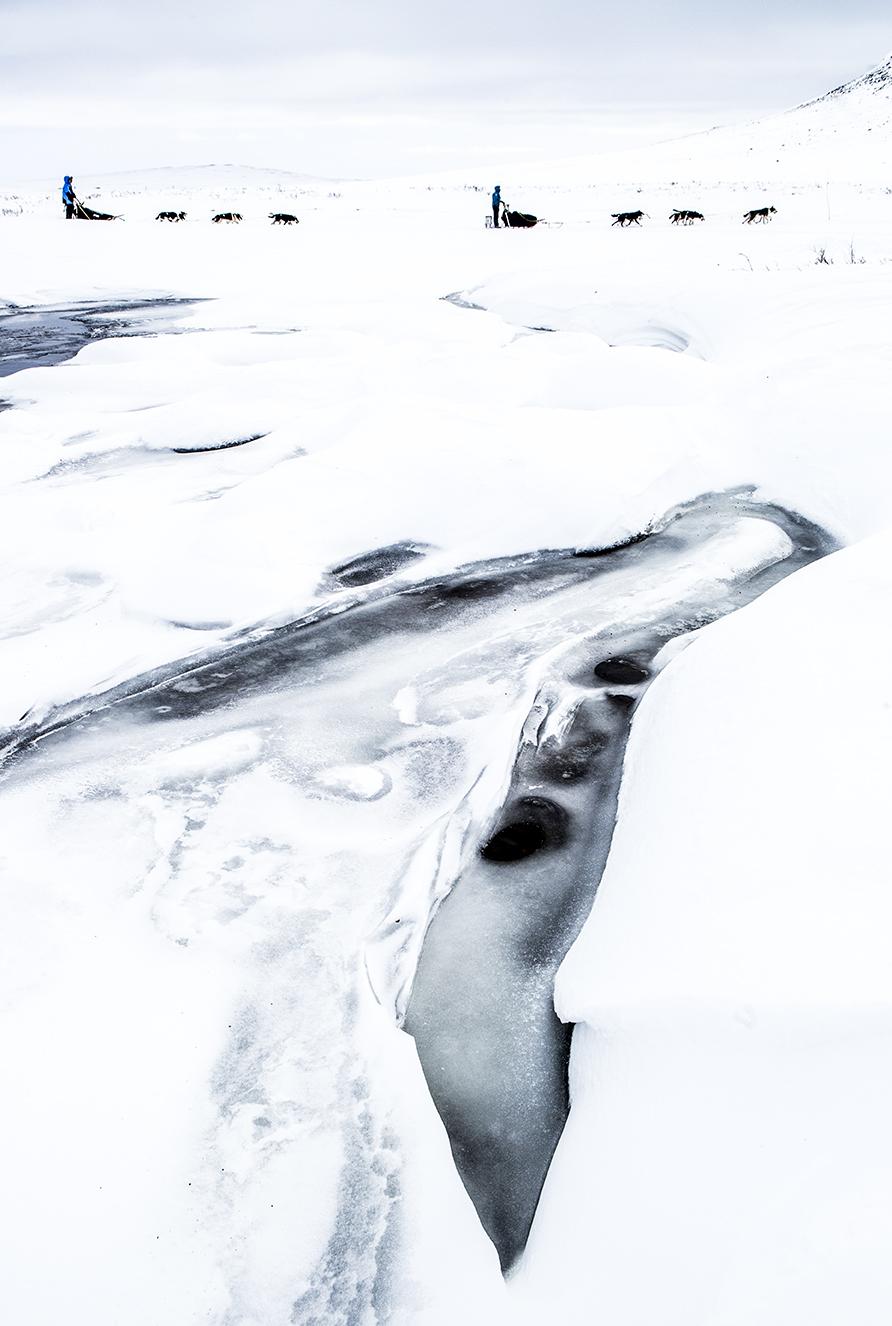 The dogs, as usual, were howling with excitement as we broke camp, packed our sleds and set off on our final leg of the Fjällräven Polar 2019. The trail alternated between wide open crossing over frozen lakes and a terrifyingly narrow route winding between the trees – it was all I could do to avoid crashing my sled into pine trunks around each corner. Finally crossing the finish line in Väkkäräjärvi was bittersweet, and saying goodbye to my wonderful dogs was the hardest part of all, but it was fantastic to look around me at our team of proud and happy explorers. They’d all just proved that they could put themselves through an incredible challenge and still have smiles on their windswept and sunburned faces by the end. 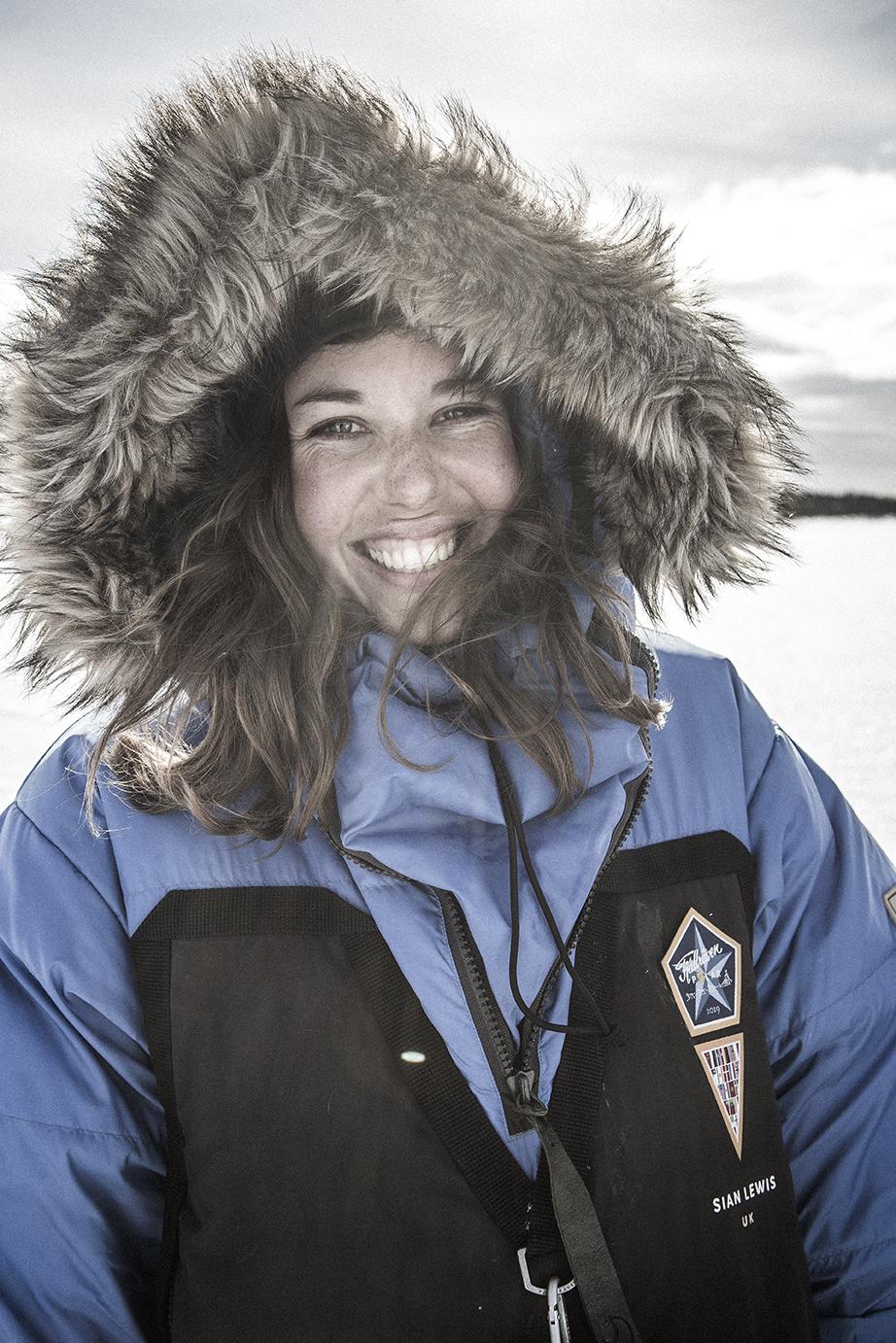 How to apply for the Fjällräven Polar 2020

Love hiking? Sign up for Fjällräven Classic, an annual series of hiking adventures held across the globe and that anyone can take part in. The original Fjällräven Classic takes place in August in Arctic Sweden, following 110km of trail with reindeer herds, mountains and hot saunas along the way. Classic treks are also held in Denmark, Hong Kong, Korea and the USA. 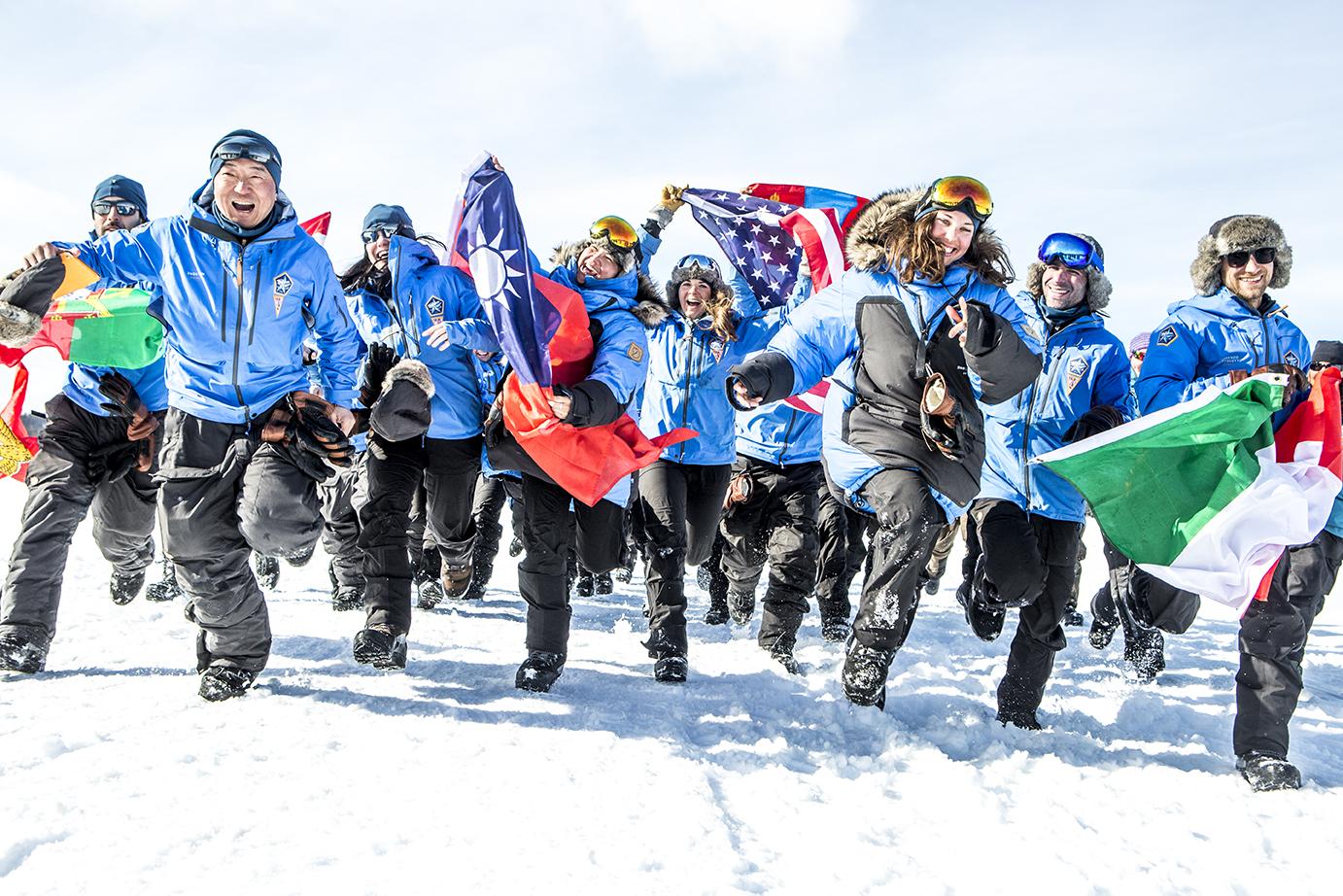