Little adventures in and around gorgeous Geiranger in Norway’s western fjords, from my travels there with P&O Cruises. Just watch out for the trolls… 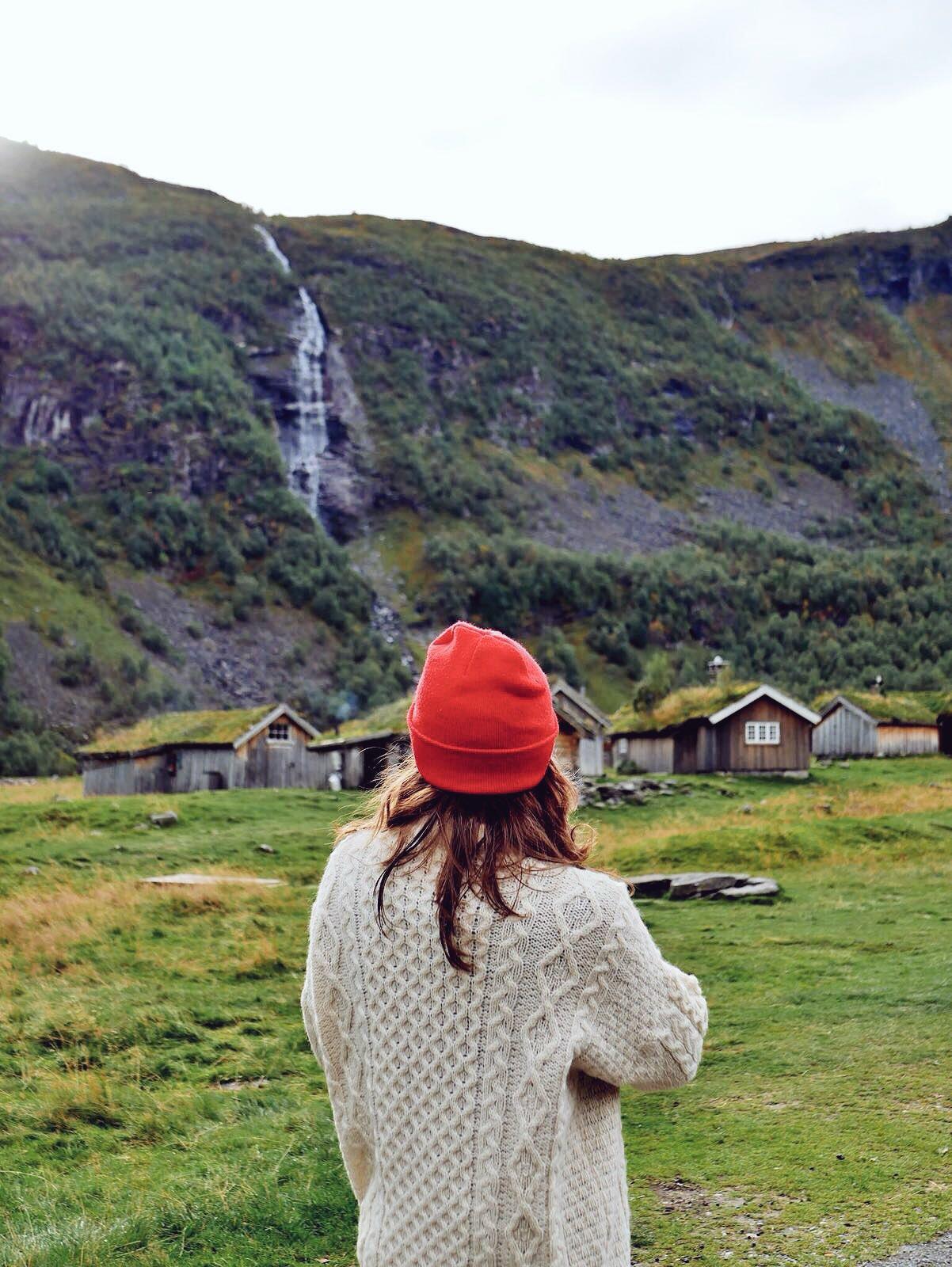 Norway’s fjords have rightly been an adventurer’s mecca for centuries. This is a land of impossible beauty, of tall green peaks, of deep blue waters, and of really great pancakes. I explored some of the western fjords with P&O Cruises, and immediately fell in love with them. They’re crowned by the UNESCO-protected Geirangerfjord – at 260 metres deep, and towered over by mountains 1,700 metres high, it’s an astonishing force of nature. Explore it by kayak and then head into the nearby mountains or to the coast to find eight more little adventures in the western fjords. Goat milk sweets, anyone?

1. Kayak Geirangerfjord
If you plan one active adventure in the western fjords, make it a kayak on this iconic body of water. Geiranger Kayaks offer guided or solo kayaking trips on Geirangerfjord from £100 per day – the best is a paddle under the Seven Sisters waterfalls, whose huge arcs of water rush down endlessly from the mountains above. Paddle along the shoreline above tall peaks and admire the far-off views of never-ending blue waters and brooding mountains.

2. Explore Briksdal glacier
It’s an easy but pretty hike up to Briksdal glacier from its visitor centre, and most definitely worth it for the view that opens up at the end, when you turn the corner and encounter the enormous glacier itself. The ice is the purest blue, and cascades down the mountain into a a turquoise pool that looks straight out of a fairy story (I dare you to swim here – I was too chicken). The rate at which the glacier is receding is also a sobering but important lesson in global warming. 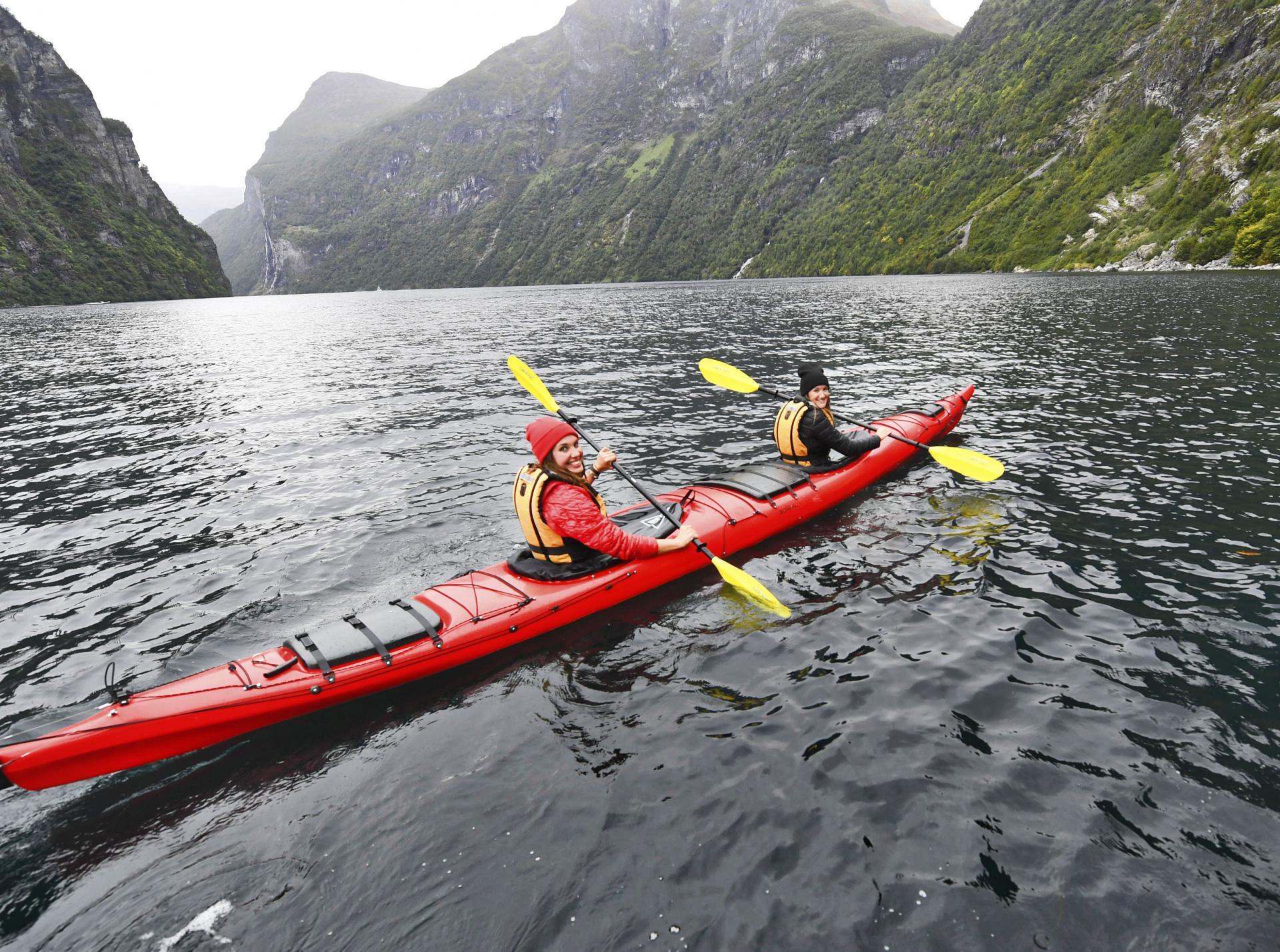 3. Cycle down from Mount Dalsnibba
Towering high above the fjords like a baddie’s lair is the lofty mountain of Dalsnibba. The views from the wide flat peak are incredible, but just as worthy of a mention is the winding Nibbevegen road that reaches the summit, considered one of Norway’s most ambitious building projects and so dangerously exposed that it’s closed all winter. Hardcore riders climb all the way up from Geiranger to the peak at 1,746 metres. Softies like me catch a lift up, but once you’ve got to the peak the joy is in cycling for miles all the way down to the bottom of the mountain, barely pedalling and whizzing around hairpin bends. In Norway they say that trolls live in isolated mountains like these, so keep your eyes peeled.

4. Surf in Hoddevik
If you’re heading back to Alesund from the western fjords, take a detour and go searching for surf on the coast. Norway has to be one of the most unsung destinations for riding waves, and one of the best places to stay is cosy Lapoint surf camp, one of my must-try Scandinavian adventures. Whizz along green waves looked over by tall mountains and ancient Viking settlements, then chill out on the beach with a barbeque. A glorious summer escape. 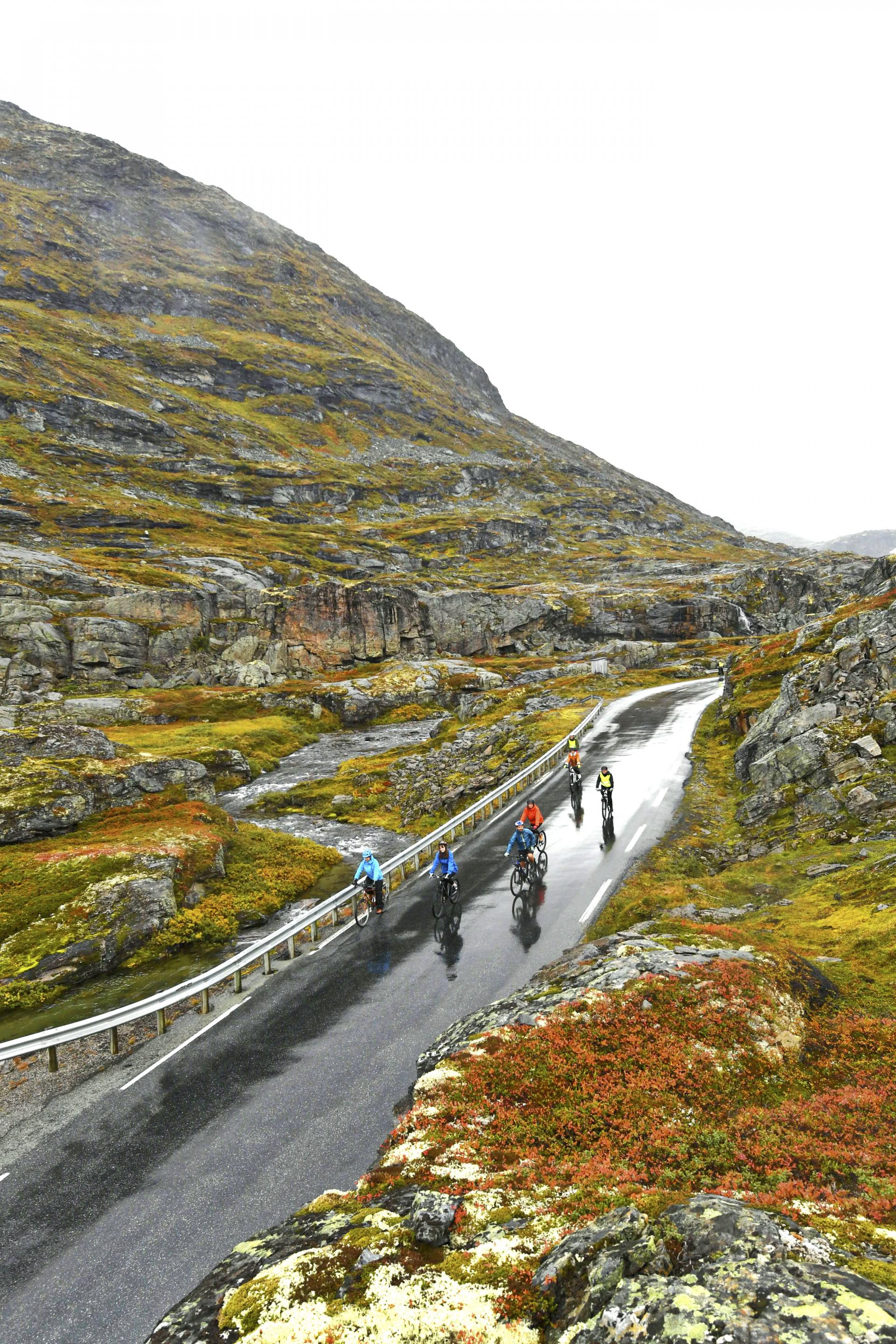 5. Hike Mount Hoven
The lofty peak of Mount Hoven may stand at a hefty 1,011 metres high above the town of Loen, but it only takes a few minutes to reach the top if you hop on the Loen Skylift, a shiny new cable car that whisks visitors straight up the mountain. Here there’s an incredible panoramic view of mountains and fjords, as well as a network of walking and trail running routes that criss-cross through Jostedalsbreen National Park. Hike around the mountain summits or back down to Loen on a trail to suit your ability.

6. Visit Herdal Farm
If you dreamt up a fairytale version of Norway, it would look like charming Herdal farm, where wooden cabins with moss-clad roofs hunker under the mountains in a lush meadow. Once a summer pasture, where herders would bring their goats to graze in the warmer months, it’s now a working museum where you can meet the farm’s herd of goats and try the cheeses and tasty goat milk sweets made here using traditional methods. 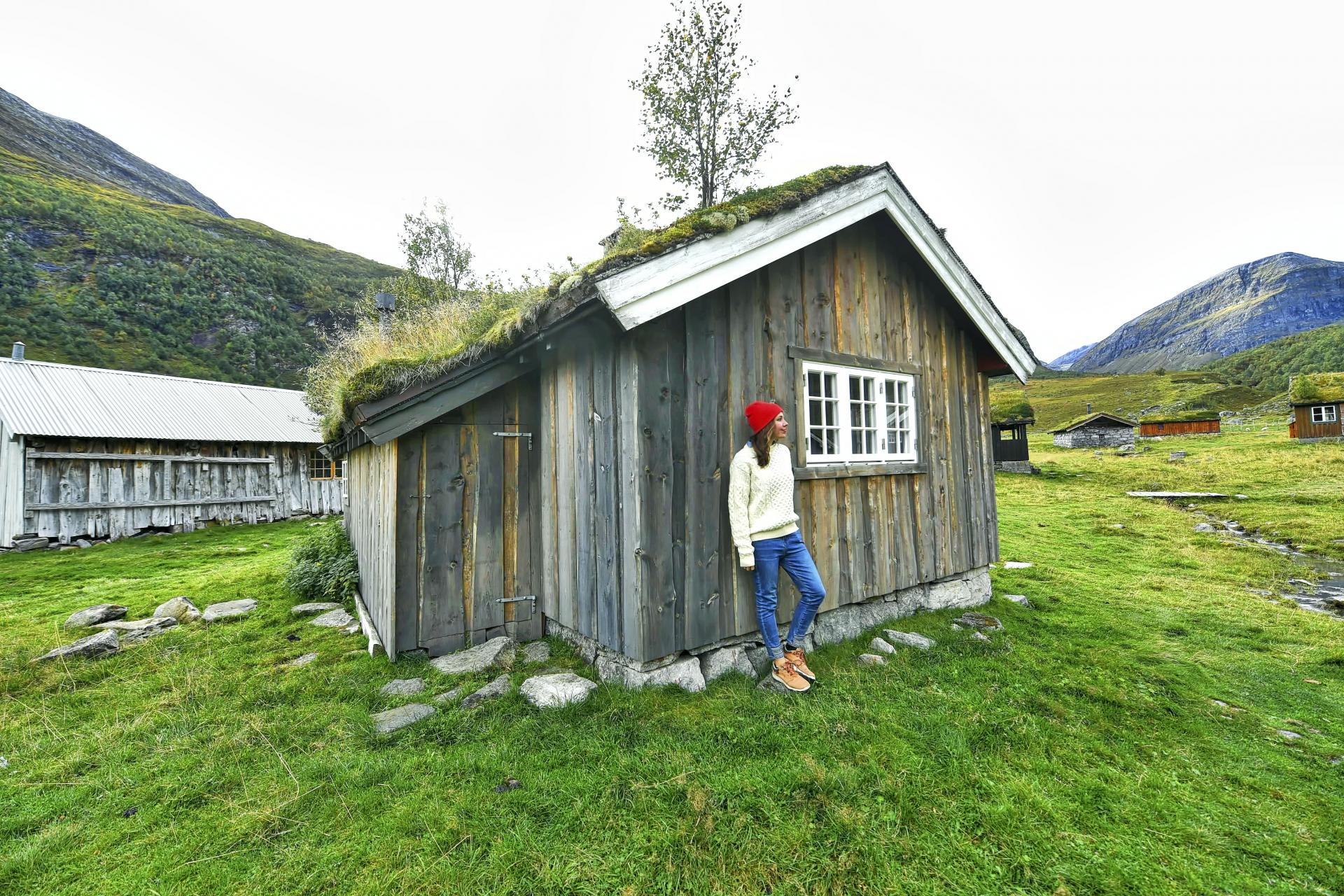 7, Helicopter over the fjords
There can’t be many more rewarding landscapes to gaze down upon from on high than the glittering Norwegian fjords. Fjord Helicopter have bases in Stryn, Geiranger and Alesund and offer tours of the skies from 20 minutes to five hours long, all letting you pretend you’re a Viking god looking down on your domain of mountains and rugged coastline.

8. Ride a rib to catch supper
Kayaking a little slow for your adrenaline-fuelled tastes? Turn it up on a notch on a speedy rib. Briksdal Adventure will take you on a foodie-meets-adventurer rib ride on the Nordfjord, first racing away from the harbour and then slowing down just enough to go fishing in the fjord. We found a beautiful velvet-blue lobster and spotted elusive dolphins frolicking on our rainy ride. Back on shore, you can cook up your catch on the harbour and toast it with wine. 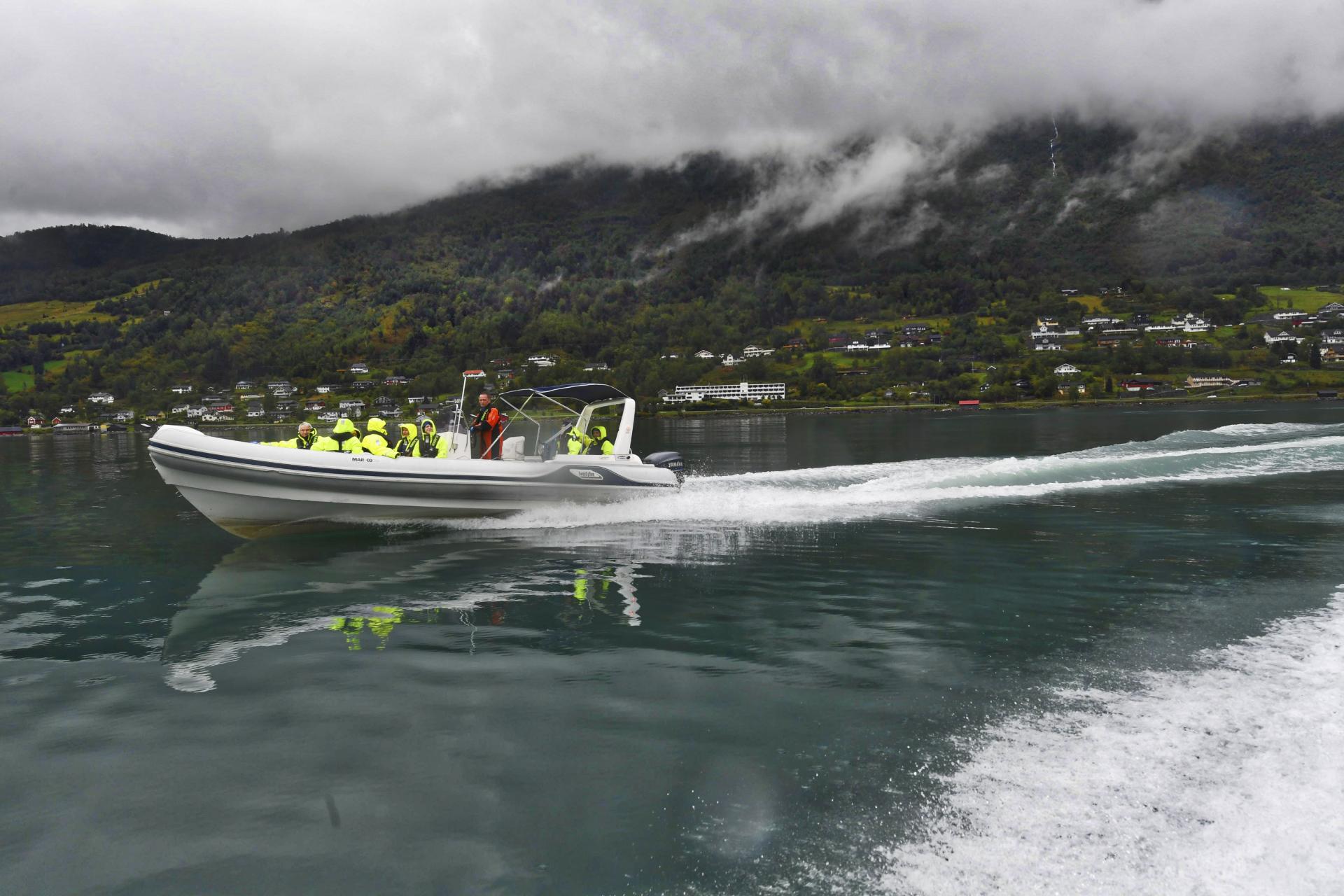 9. Try Scandi treats
Okay, this is more of a culinary adventure than an outdoorsy one, but Geiranger is the perfect place to try Scandinavian food, one of my all-time favourites. Head to cosy Cafe Ole for a big dose of hygge with your coffee – the cake counter groans with traditional sweets (I loved the traditional jam pancakes they whip up) and the cafe also sells Scandinavian design favourites. For lunch, pop in to Brasserie Posten for a smorgasbord of cured meats and local seafood, served with craft beers. 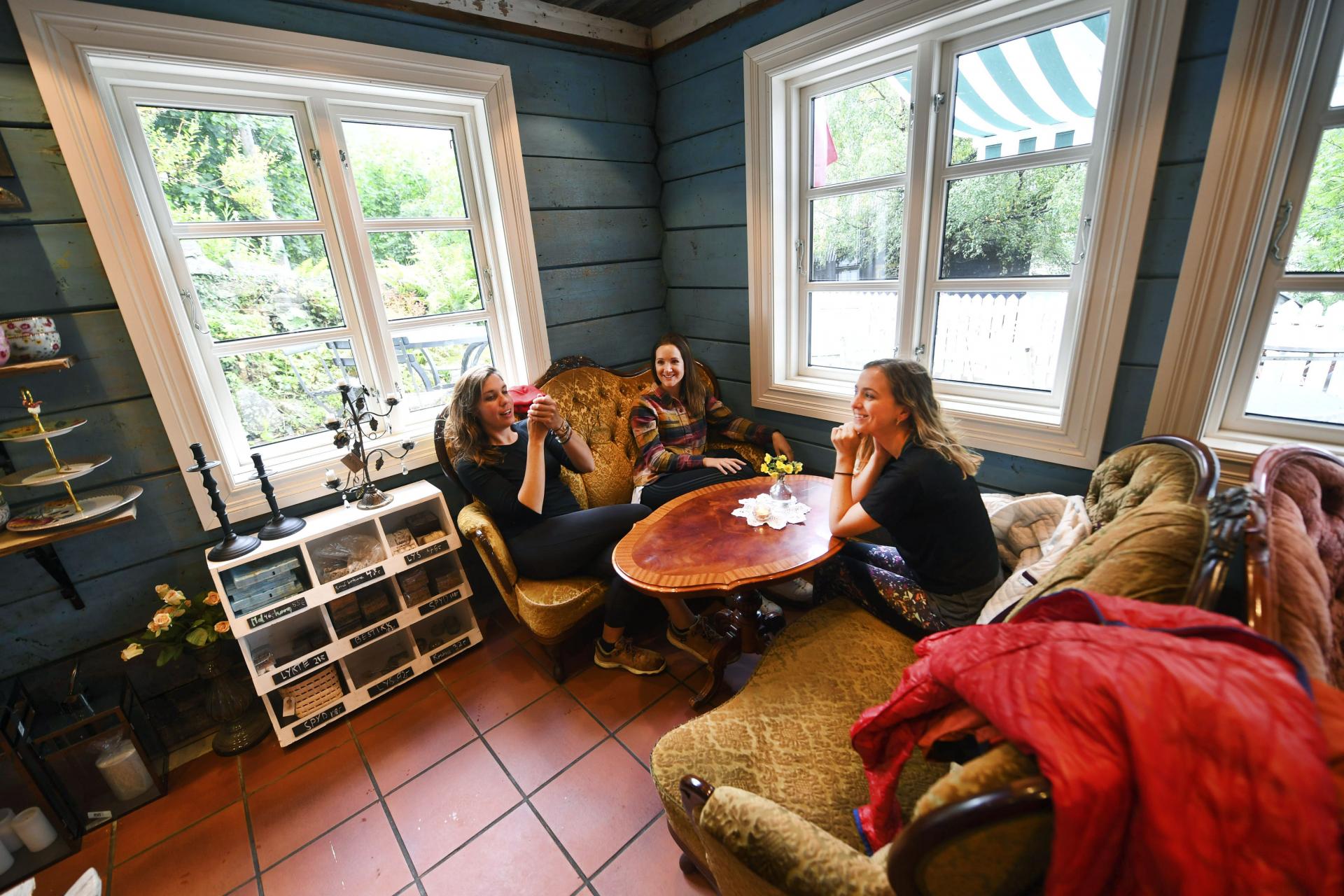 Book it: I visited the Western fjords as a guest of P&O Cruises, who offer Norwegian cruises departing from Southampton from £749 pp.

Think work will get in the way of dreaming big? Not if you pick one of these seven epic weekend adventures, all of which fit&…
END_OF_DOCUMENT_TOKEN_TO_BE_REPLACED

How to work out anywhere with The Sports Edit

One of my favourite beach coves to swim at in Britain is home to clear waters and a secret smuggling history. Wild Swimming at Prussia&…
END_OF_DOCUMENT_TOKEN_TO_BE_REPLACED

Camping in summer and gallivanting in winter in the company of Millican’s lovely 25 litre Fraser rucksack, £130, a roomy and weatherproof adventure companion. Millican…
END_OF_DOCUMENT_TOKEN_TO_BE_REPLACED

Is it time to escape from real life and get working on your downward dog? From sumptuous private Greek islands to cosy Cornwall and off-grid&…
END_OF_DOCUMENT_TOKEN_TO_BE_REPLACED

It’s Christmas! And to celebrate an adventurous 2019 to come, I’m giving away two go-anywhere Boom 3 speakers from Ultimate Ears, worth £129.99 each. Win…
END_OF_DOCUMENT_TOKEN_TO_BE_REPLACED

The best aquatic adventures in Britain

Already in love with wild swimming? Why not try another adventure on the water this year? After all, you’re never more than 70 miles from&…
END_OF_DOCUMENT_TOKEN_TO_BE_REPLACED

Diary of a road trip around Cape Breton, Canada

I’ve long been meaning to write down the story of the most magical road trip I’ve ever taken. Cape Breton is an island …
END_OF_DOCUMENT_TOKEN_TO_BE_REPLACED

It’s the most wonderful time of the year! Be the super-organised person you always wish you were and buy all your Christmas gifts early …
END_OF_DOCUMENT_TOKEN_TO_BE_REPLACED

Places to Stay: Another Place, The Lake, Cumbria

Get a great big dose of the Lake District with a stay at Another Place, The Lake, a charmingly relaxed hotel with adventure at its&…
END_OF_DOCUMENT_TOKEN_TO_BE_REPLACED

It’s the most wonderful time of the year… the snow season. Winter is coming – and if you’re planning on heading to cold climes …
END_OF_DOCUMENT_TOKEN_TO_BE_REPLACED

Testing out the expensive but deliciously comfortable Jottnar Fenrir down jacket, £295, in the wild – I reckon this beautiful bit of outdoor kit is…
END_OF_DOCUMENT_TOKEN_TO_BE_REPLACED

How to pack for the Himalayas, a trekking packing guide

Are you heading for the magical high mountains of the Himalayas? The mountain range spanning India, Pakistan, Afghanistan, China, Bhutan and Nepal is one of&…
END_OF_DOCUMENT_TOKEN_TO_BE_REPLACED

Kathmandu reckon their Benmore 5-in-1 jacket, £223, is the ultimate travel jacket. Time to put it to the test. Product description: “It’s a rain jacket&…
END_OF_DOCUMENT_TOKEN_TO_BE_REPLACED