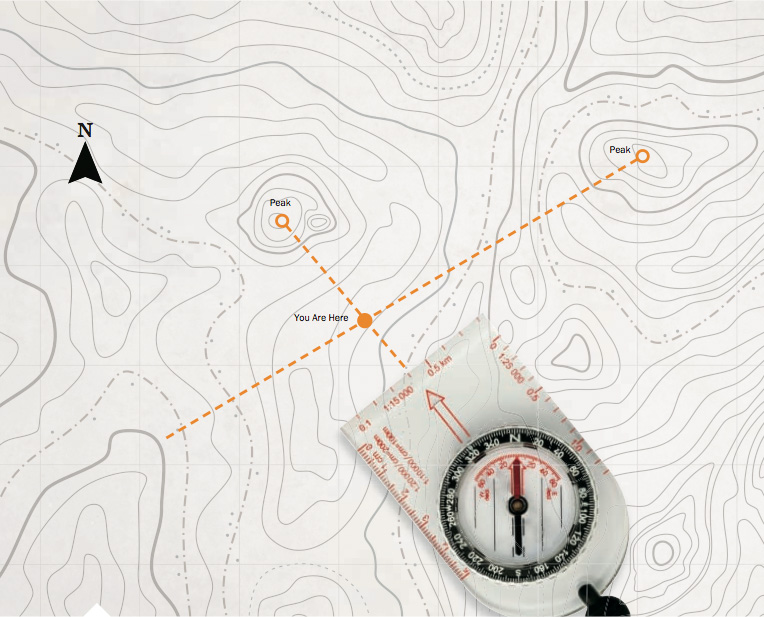 First things first: To use a map and compass successfully, you have to figure out where you are on that map. Or to put it in outdoor geek terms, you need to triangulate a “fix” on your position.

KNOW WHICH WAY’S UP
Maps are printed with north at the top. Using the compass, orient the map so it aligns with magnetic north.

FIND KEY LANDMARKS
Once you have the map oriented, look around you for terrain features like a lake, river, or mountain peak. Identify the same features on the map.

PLOT A COURSE
Looking up with your compass in hand, point the red arrow of the compass’s base plate (this is called “shooting a bearing” in orienteering speak) at the visible terrain feature. If the compass shows a bearing of, say, 320 degrees, draw a line from that feature on the map at an angle of 140 degrees (320 minus 180). You are somewhere on that line, called a line of position (LOP).

LAY A FOUNDATION
You don’t know where you are on that line until you shoot another bearing, preferably at something between 60 and 120 degrees from the first one. When you draw the second LOP on the map, extend it so it crosses the first one. Where the two LOPs intersect is your “fix.” That’s where you are. Once you know your position, other decisions, such as which way to walk, become much easier.

The Ultimate Survival Manual is my new outdoors bible. Written by the resourceful, hilarious and clearly slightly insane ex-paratrooper Rich Johnson, the book covers 333 skills that’ll extract you from the hairiest of situations, with guides ranging from which bugs are safe to eat to how to survive a stampede, find water in the desert, make emergency snow goggles or shoot a crossbow. If you’ve ever idly wondered how to wade through a swamp or whether it’s safe to drink your own urine, this is the book for you. Published by Bloomsbury, it hits the shelves on the 14th March 2013.

Trekking the Indian Himalayas with the British Exploring Society