A rather magical weekend under canvas on the gorgeous Gower. We went stand-up paddleboarding, swam in the sea and ate very tasty bacon sandwiches with a glorious view. Swansea Bay, I like you. 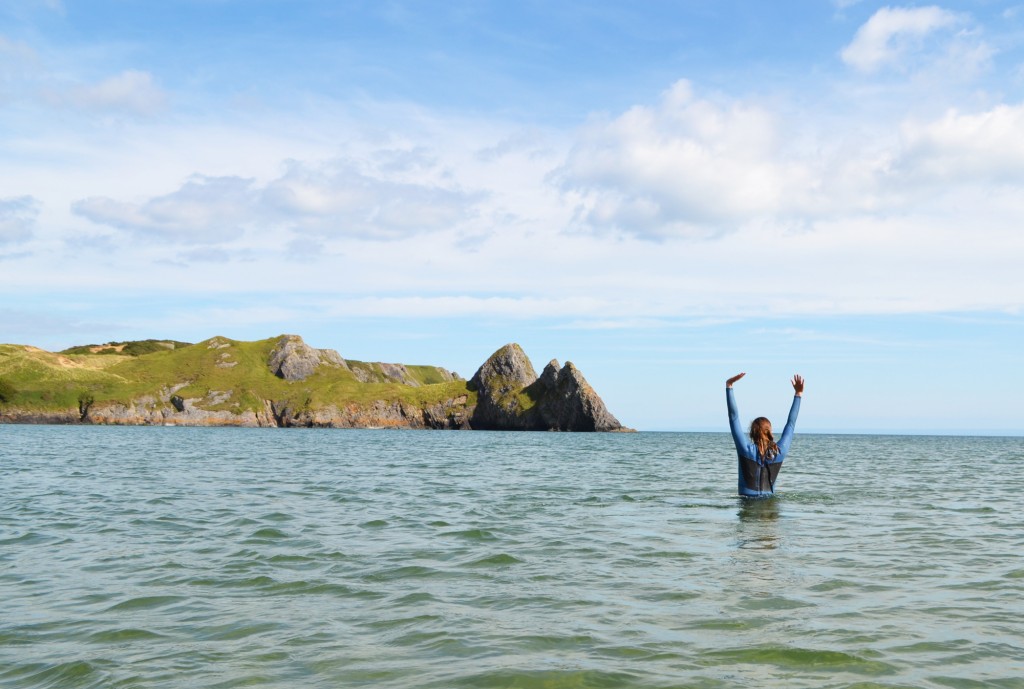 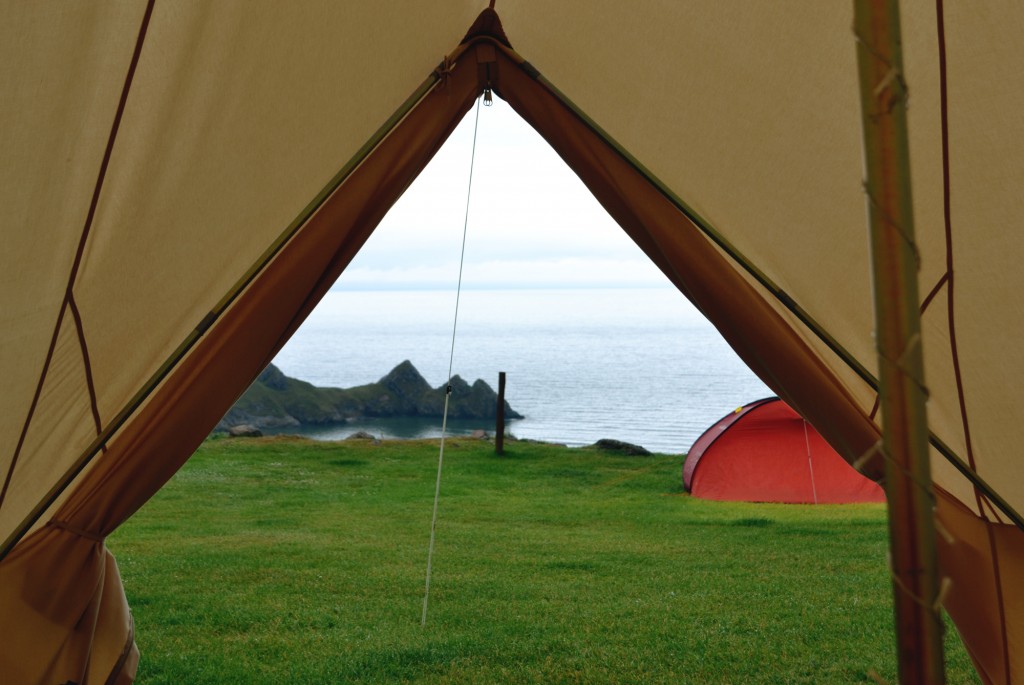 When it comes to weekend escapes, it’s hard to beat the glorious Gower. Swansea Bay always surprises me – from golden sandy beaches flocked to by surfers to majestic castles, sleepy villages and wide open moorland, a trip here always feels like discovering a secret land. And there’s no better way to explore the gem in Wales’ coastal crown than by packing a wetsuit and a nice mate for a posh camping weekend. 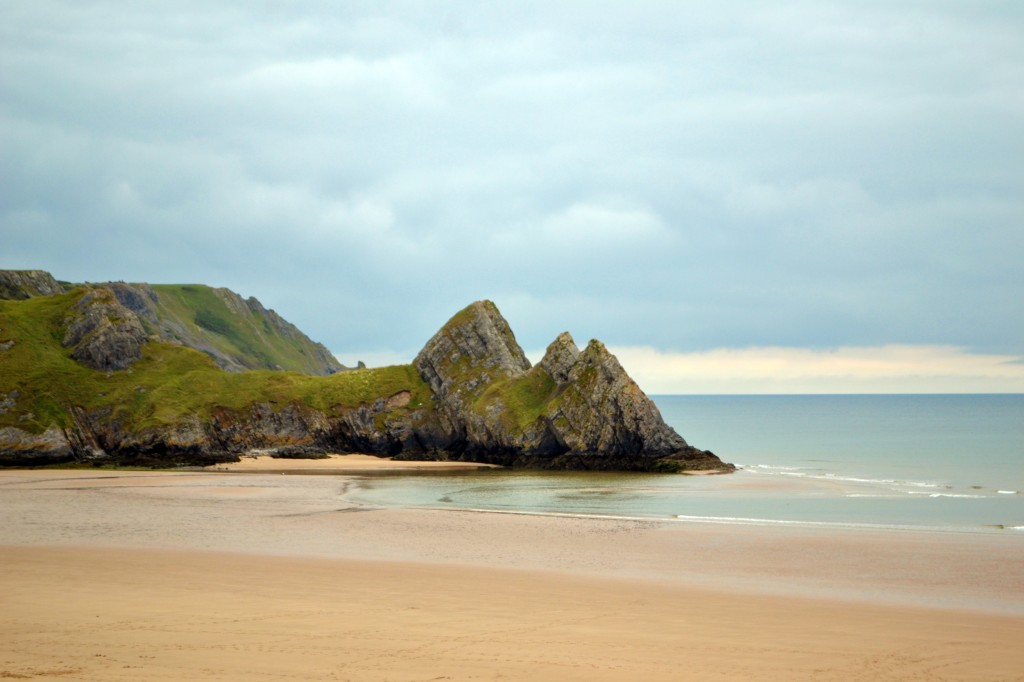 Maria and I arrived at Three Cliffs Bay in the middle of very Welsh weather – a June downpour. The friendly campsite warden greeted us and walked us to our pitch, which looked out at a sea of fog. “There’s a wonderful view, promise!” she said cheerily. The deluge would have been disheartening on most camping trips, but we were staying in one of Pitch my Tent’s wonderful canvas bell tents, which are so cute and cosy that even being in the middle of what felt like Hurricane Bertha didn’t dampen our spirits. 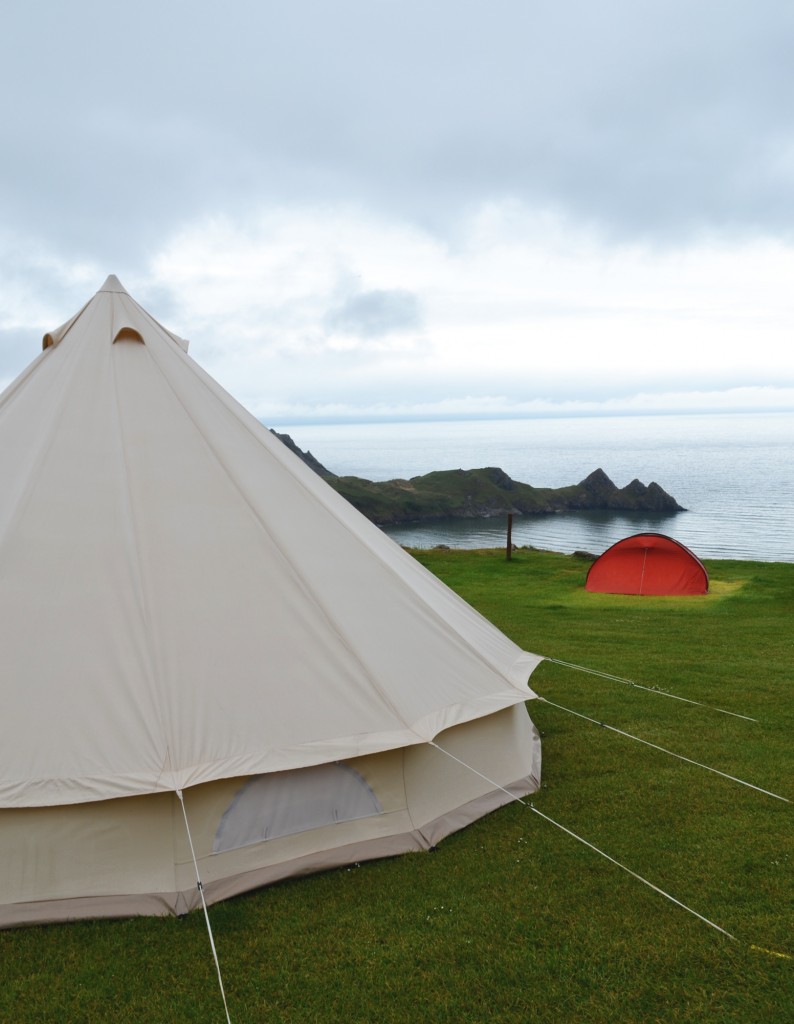 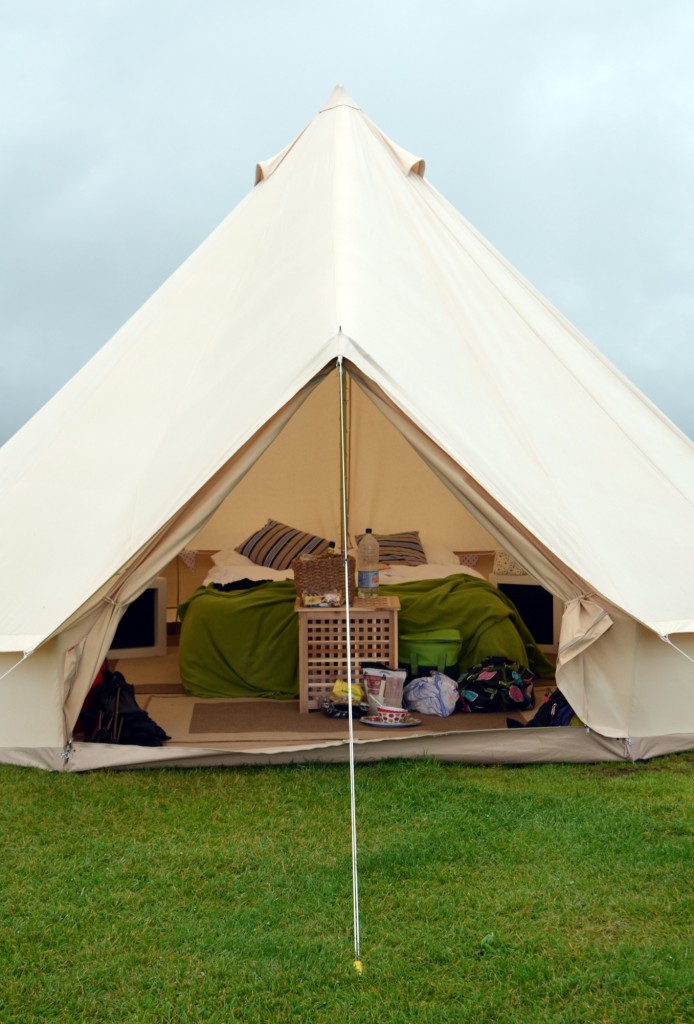 Pitch My Tent do seriously nice camping. In fact, they may have ruined me for my own little two-man tent. Their big bell tents, which they will put up for you at lots of different campsites on the Gower, come complete with a comfy double bed, storage space, a stove, a cooking kit and a hamper full of delicious treats, plus other essentials like lashings of bunting and strings of fairy lights. Having a huge canvas home all ready for you to play house in is a serious treat.

The next morning, we got our promised view. The campsite is often voted one of the most picturesque in the world, an accolade it definitely deserves, jutting out as it does over an expanse of heather, golden sand and the incredible verdant triple peaks which give the bay its name. A view like this is hard to beat, especially when you enjoy it with a breakfast of greasy bacon sarnies and strong coffee (caffeine and saturated fat are definitely my two culinary loves). 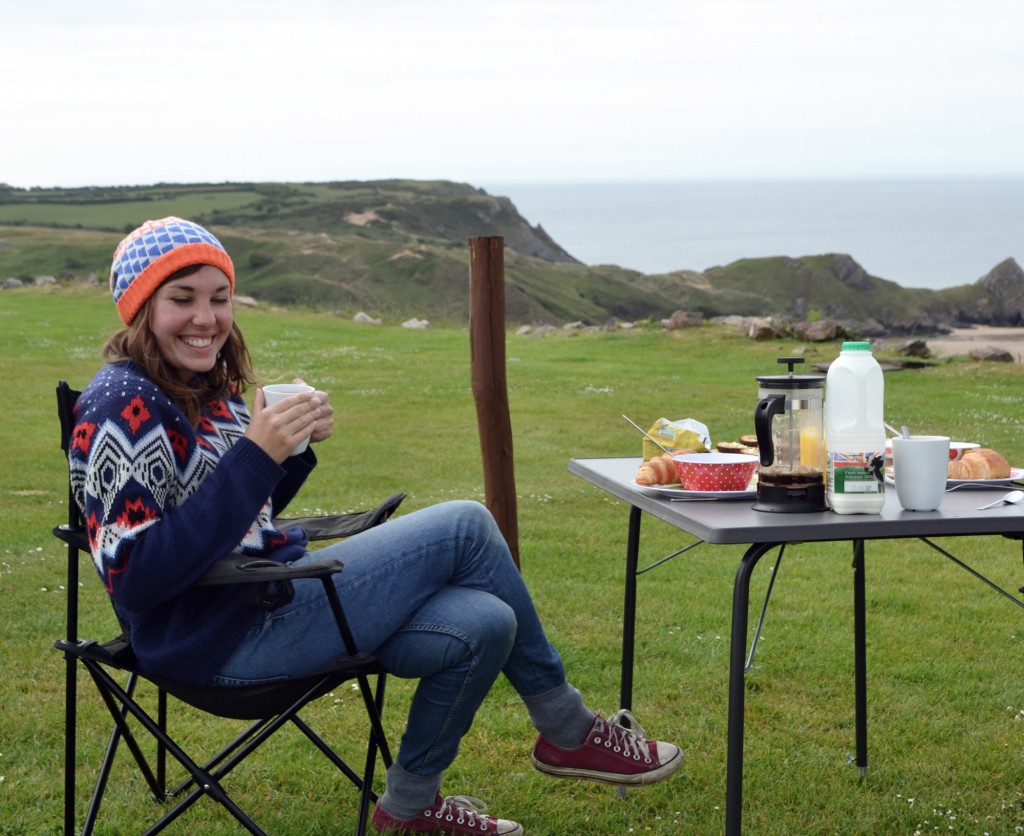 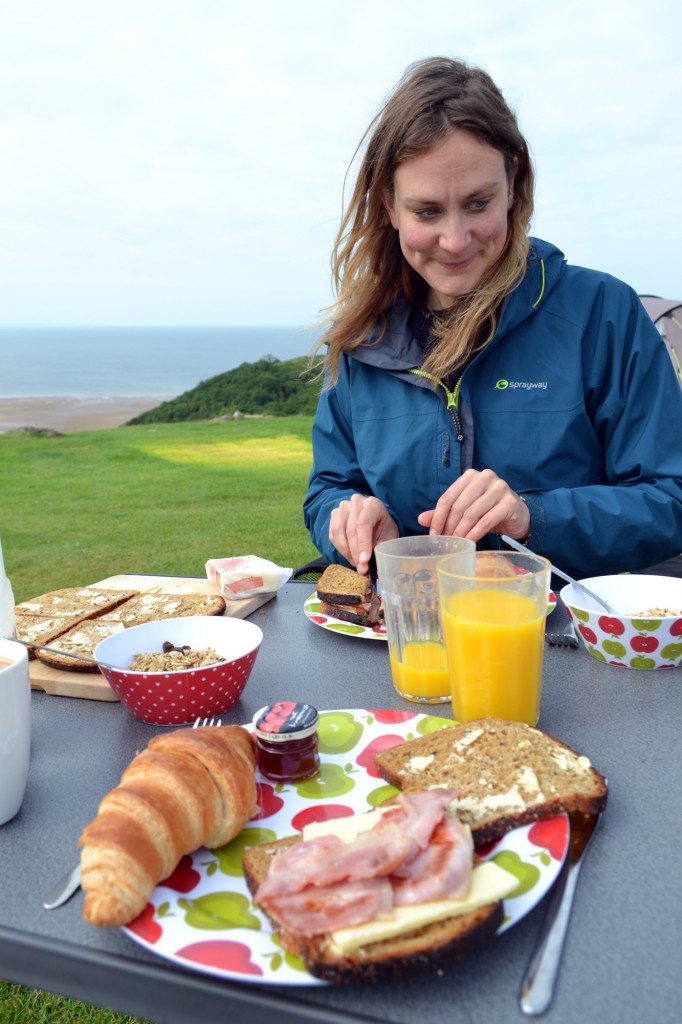 Whilst the weather was less than wonderful we explored Oystermouth castle, flower-strewn ruins guaranteed to give you the romantic shivers. Perched above the pretty village of Mumbles, the once-proud walls of this Norman castle are now open to the elements. I loved wandering around imagining the medieval banquets which where once merrily whiled away here. There are still different rooms and secret passageways to explore, including one used solely for the purpose of deliving wine to the Lord and Lady’s chambers. I need one of those in my house. 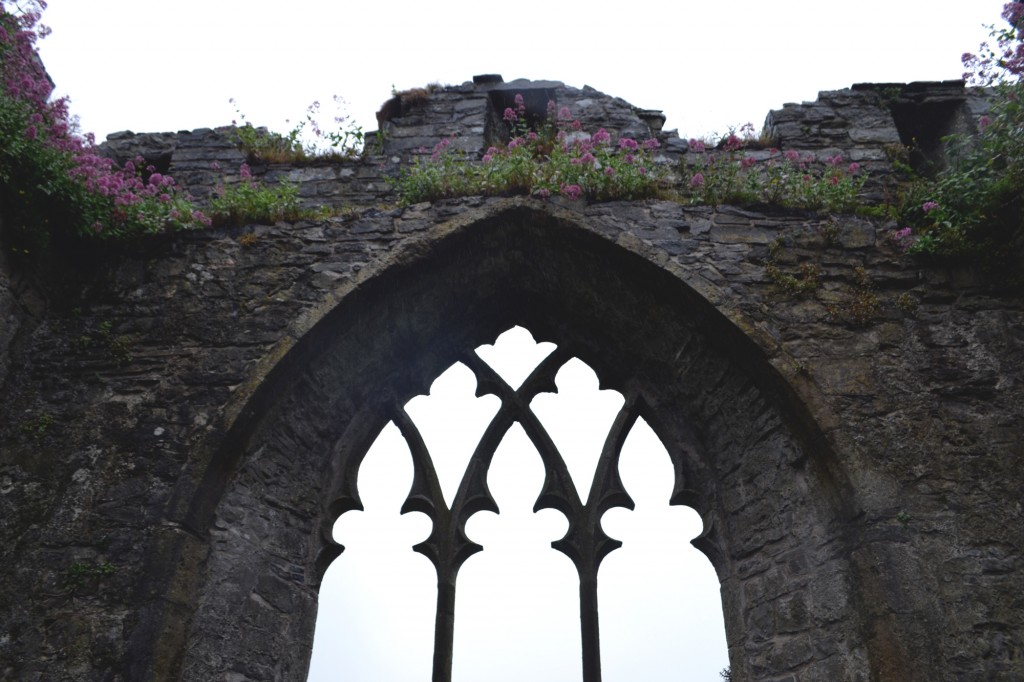 In the afternoon we had a taster of another part of Swansea Bay’s appeal – watersports. I love to come surfing on the Gower but this was my first attempt at stand-up paddleboarding on the sea. Maria and I had only ever tried SUP-ing on the calm flat waters of Bristol’s harbour before, but our lovely instructor Sean at 360 watersports made bobbing about on the bay look very easy. Wetsuits on and paddles in hand, we were soon carving our way along the coast, occasionally performing unintentional somersault dives into the sea and getting absolutely soaked as we mastered standing upright. By the end of the session I even tried rekindling my SUP yoga skills, managing a (very quick) headstand. 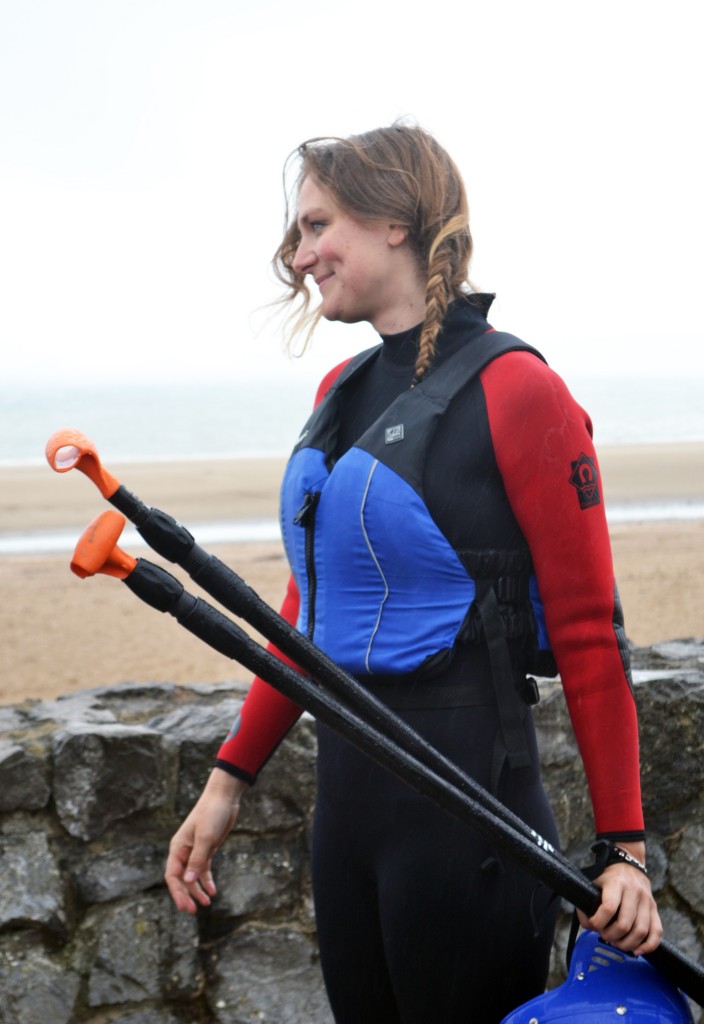 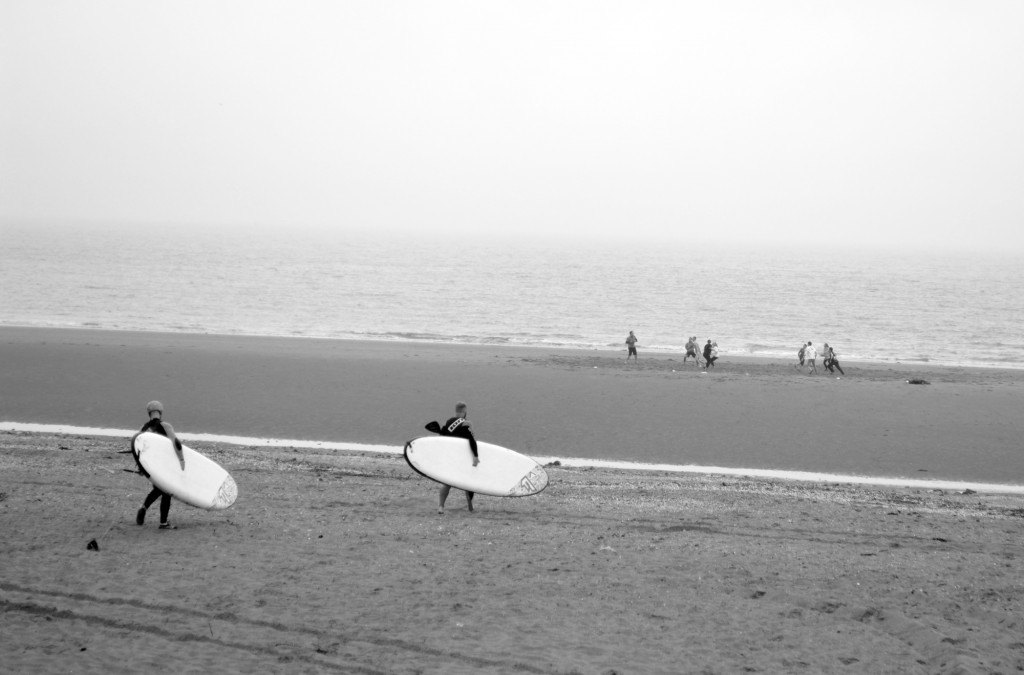 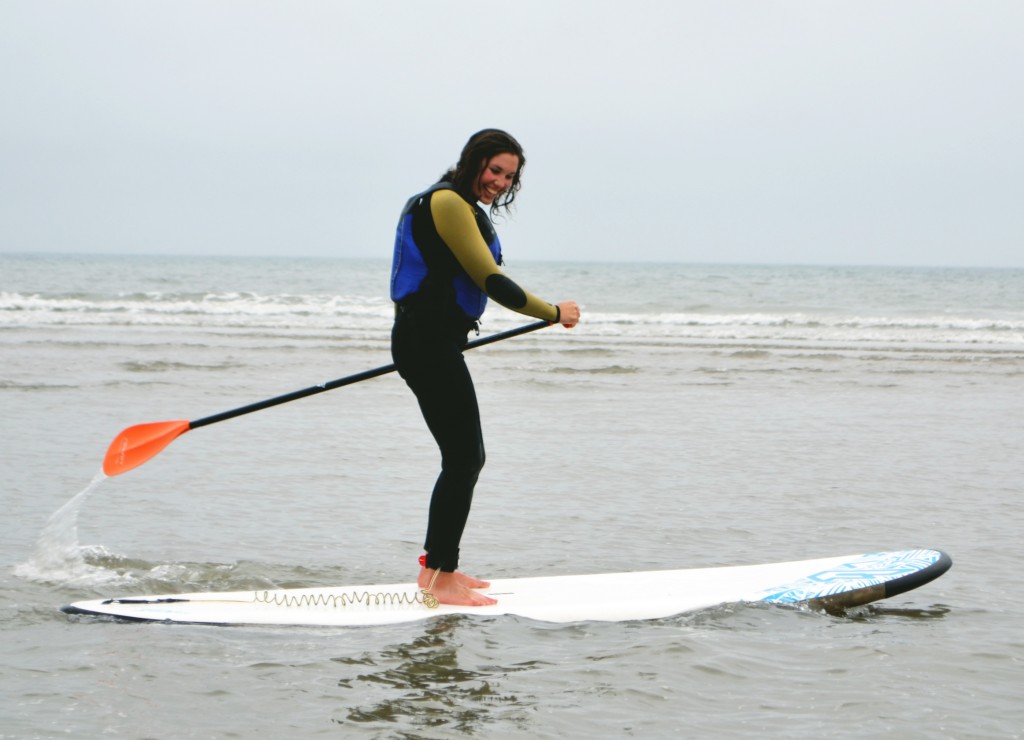 We warmed up with a coffee in 360’s café and the sun finally decided to make an appearance, just in time for a long walk on the dunes back at Three Cliffs. Salt water always makes me ravenous, so some hearty pub food at the cosy King’s Head in lovely Llangennith seemed like a very sensible evening plan. One of my favourite things about the Gower is how ever-changing it is – the wide-open moorland grazed by wild ponies out towards Rhosilli feels like a million miles from the bustle of Swansea Bay. 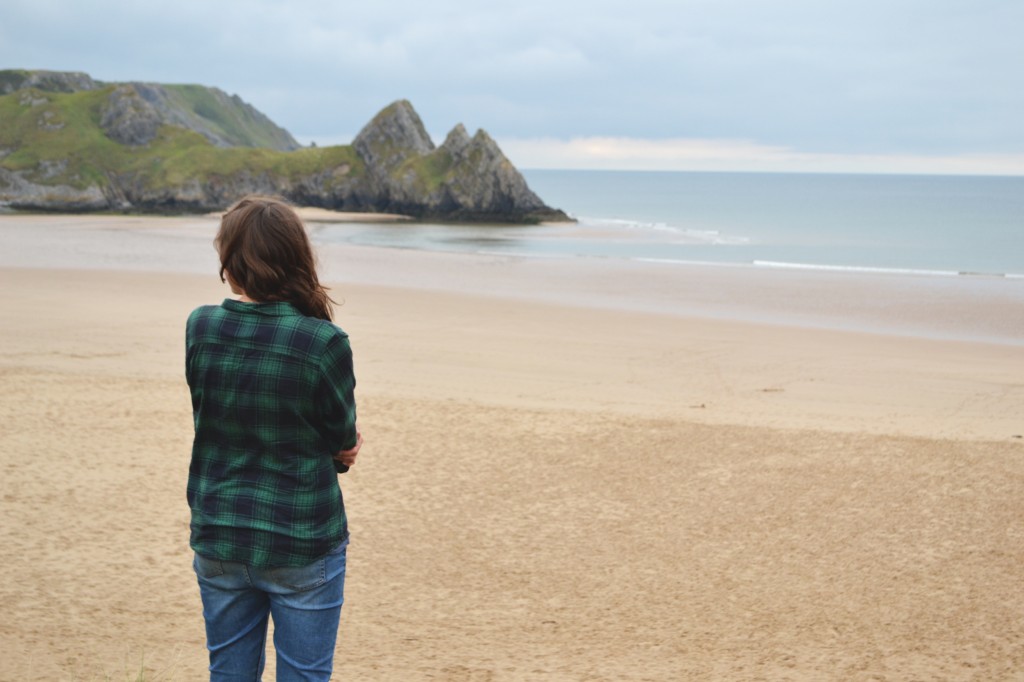 Our final day dawned a glorious, sunshiney Sunday, and we drove to Worm’s Head. So named because Viking invaders thought it resembled a serpent rising from the depth, the rocky island looks out over the endless sandy expanse of Rhosilli Bay and miles of blue sea. If the tide is right you can take a lazy walk down to the causeway which separates the island from the mainland, past hardy sheep grazing on the springy grass. I’m not alone in loving to wander here – Dylan Thomas wrote of “laughing on the cliff above the very long golden beach… standing triumphantly on the windy top.”. Check the tide times before you venture onto the head yourself though – those cut off by the sea must wait half a day before they can return. 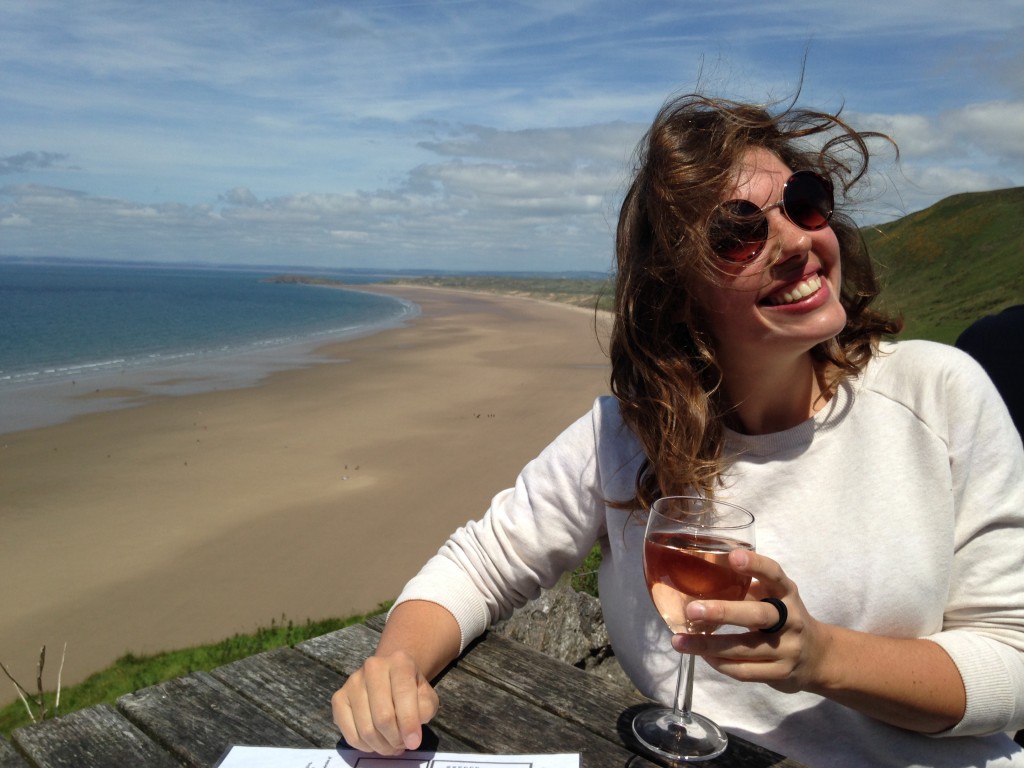 And it was so hot! In Wales! Maria and I drove back to the campsite along winding coastal lanes bordered with wild flowers and dug our wetsuits out for a dip in the sea. The clear water was a tad chilly but amazingly refreshing, and we paddled happily under the shadow of the three peaks, practicing our headstands and exploring the rockpools and stone archways under the rocky cliffs. Happy days. Rain or shine, there’s nowhere for making you feel free like the Gower. 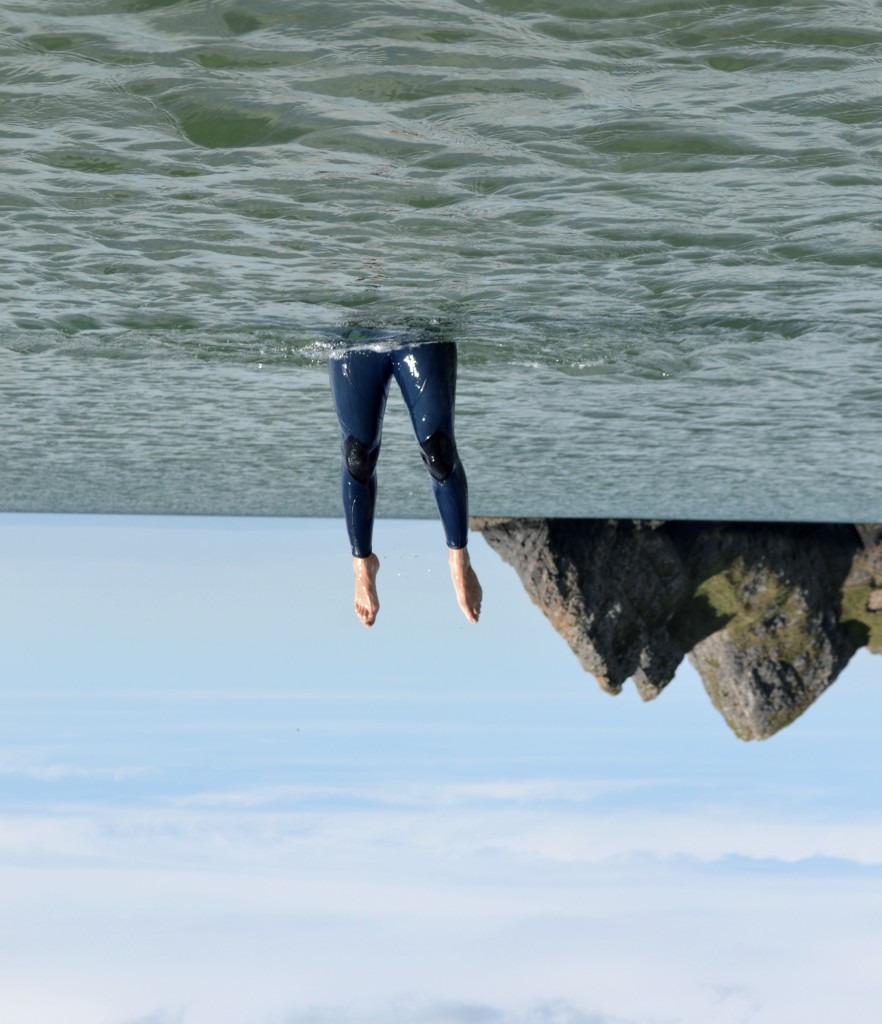 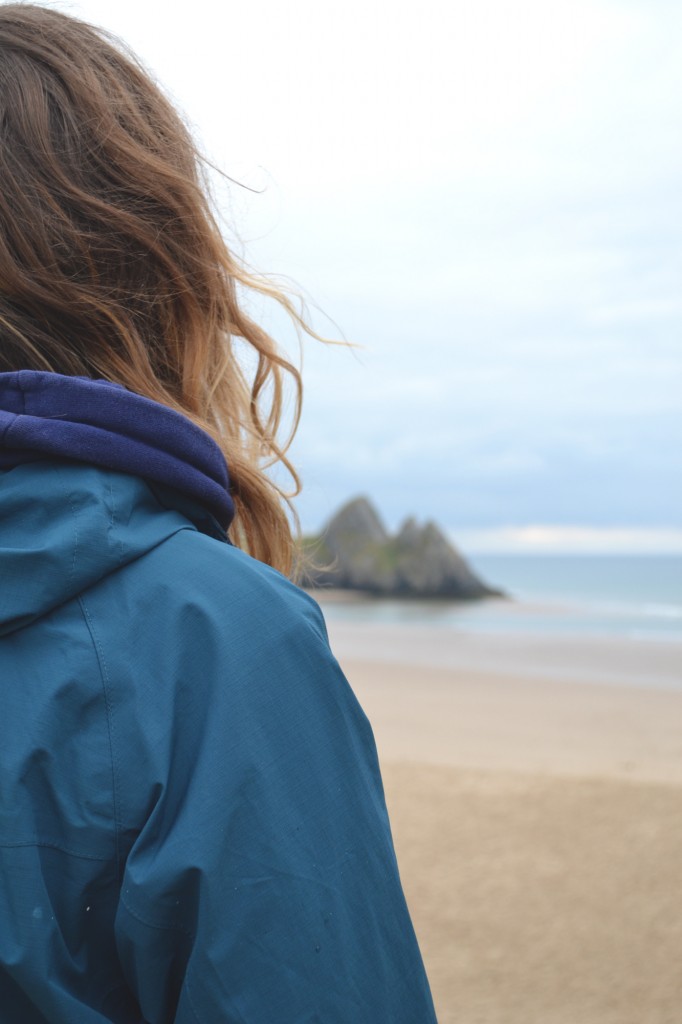 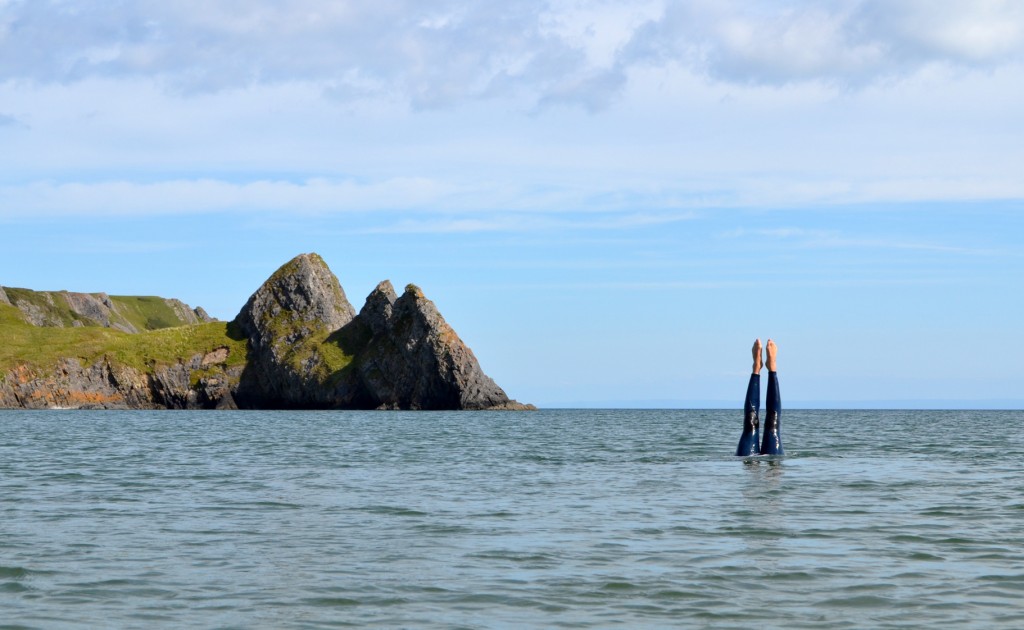 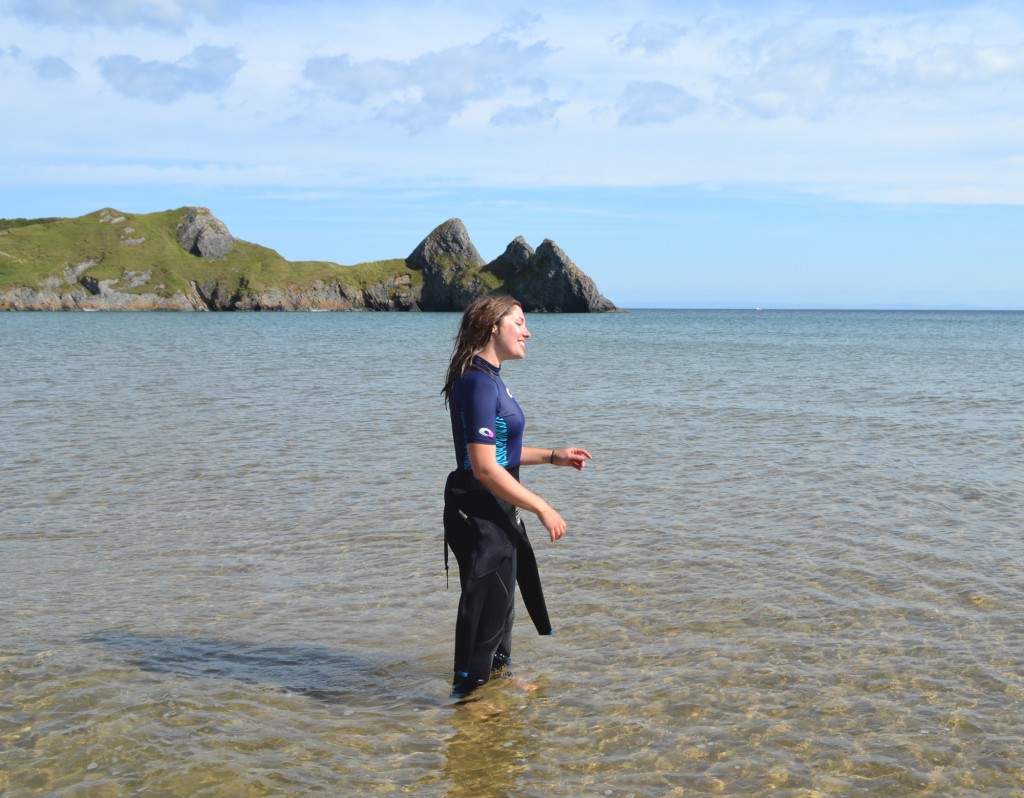