The Painted Lady, the Red Admiral and the Grizzled Skipper may sound like characters from a sea-farin’ fairy tale, but they are actually the common names of three of the UK’s 50 varieties of butterfly. Each year, the first brightly coloured specimens of Lepidoptera are hailed as a sign of the beginning of the holidays. 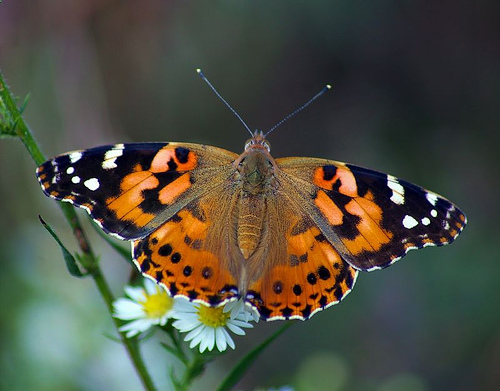 As the poet John Masefield wrote, butterflies are “the souls of summer hours”, and in June July and August the delicate insects live out their brief lives in the sun, and are as much a part of picnics and nature rambles as sunburn and wildflowers.

The wait for the insects may be shorter this season, as the Butterfly Conservation charity, which charts and protects the fragile creatures, has reported that the unusually warm April the UK has experienced has sped up butterflies’ breeding cycles. As a result, this summer may see record numbers in gardens, woods and
grassy spaces.

Dr Martin Warren, Chief Executive of Butterfly Conservation, said: “This early crop of butterflies will lay eggs earlier than normal, meaning that we may see a second generation this summer. It’s the perfect time for people to get out and see what different species they can find.”

Adonis Blue: Polyommatus bellargus
Small and rare but arguably the most beautiful British butterfly, the male Adonis’s wings are a vibrant azure that look like something dreamed up by the Avatar graphic designers. They live on chalk and limestone grassland.

Brimstone: Gonepteryx rhamni
Sulphur yellow wings shaped like leaves distinguish the Brimstone from other butterflies. One of the longest living varieties, they can live for up to 13 months. The story goes that the name ‘butterfly’ was derived from their yellow wings.

Comma: Polygonia c-album
The Comma takes its name from the white comma-like markings on its under wings, which resemble fallen leaves for camouflage. One of the more common butterflies in Southern England, they live in gardens and woodlands.

Painted Lady: Vanessa cardui
The attractively-named Painted Lady’s colourings are just as pretty as its name: a warm mix of orange and red with black tips and white spots on the forewings. Common throughout Britain, they are one of the easiest butterflies to spot.

Peacock: Inachis io
Peacocks are a gorgeous red with tiger-like ‘eyes’, commonly believed to be an anti-predator mechanism, on their forewings. Widespread in Great Britain, a sighting of these large butterflies is believed to be a harbinger of spring.

Red Admiral: Vanessa atalanta
A large and strong-flying butterfly, the Red Admiral’s dark black and purply-red colourings are unmistakable. They are commonly found in gardens, although their hardiness means they can be found throughout the British Isles.

Small Blue: Cupido minimus
Britain’s smallest butterfly has a suitably cute Latin name, and is rare and localised due to its selective wildflower diet. Its tiny wings are a soft dove grey-blue in colour.

Small Copper: Lycaena phlaeas
The bright and attractive Small Copper is indeed a coppery orange in colour, with brown spots and brown edges to its wings. This sun-loving butterfly is easily spotted on hot days, when it will settle on grass or flowers to bask in the warmth.

Small Tortoiseshell: Aglais urticae
One of the most familiar butterflies in Britain and Ireland, the Small Tortoiseshell’s bright orange and black wings are a common sight in gardens and parks, although a decline in numbers has worried lepidopterists in recent years.

Speckled Wood: Pararge aegeria
Found, as the name suggests, in woods and forests, the dappled brown and white wings of the Speckled Wood are ideal for camouflage against trees. They are often spotted spiralling about in rays of sunlight in wooded areas.