My brilliant friend Bobby Downs taught me how to make all-American s’mores when we went hiking in the Catskills, so I asked him to write down this extreme(ly delicious) way of toasting marshmallows over a fire. 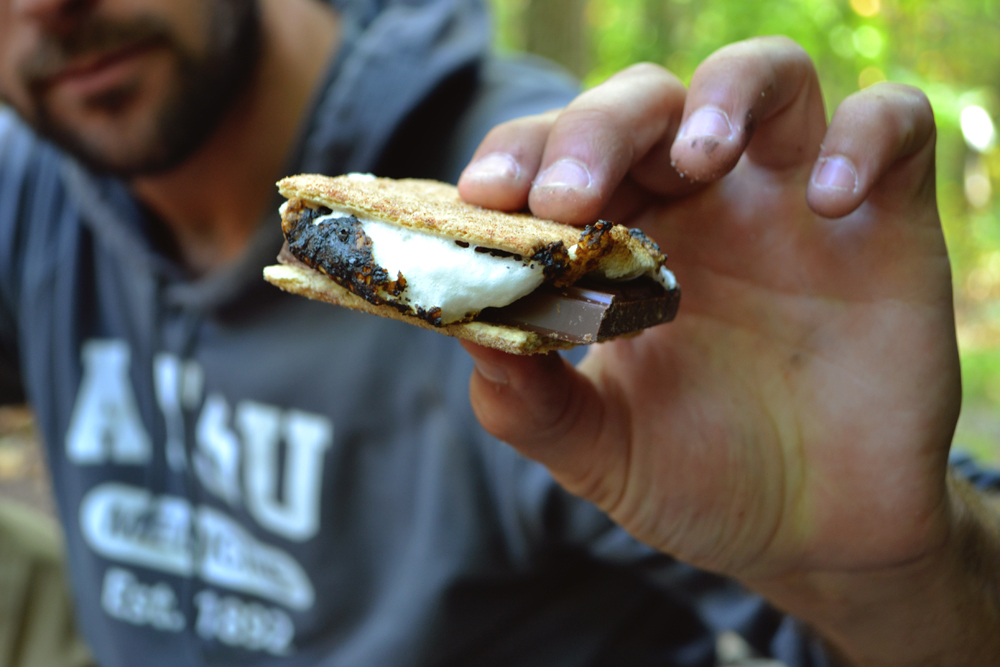 In my eyes, the s’more’s closest relatives are camping and childhood, so imagine my surprise when Sian told me she had never before tasted one. Not only that, she was oblivious to the existence of the graham cracker. Lucky for us, in America foods like graham crackers, Hershey’s chocolate, and party-sized bags of marshmallows are abundant much like I imagine porridge-making supplies to be in England. If you’re in the UK, you could always make your own cinnamon biscuits. In preparation for the s’mores, we burned a few calories (but certainly not enough) hiking to a wooden refuge with a fire pit atop Mount Tremper in New York State. For the uninitiated, I will recap the step-by-step lesson I imparted on the mountaintop. 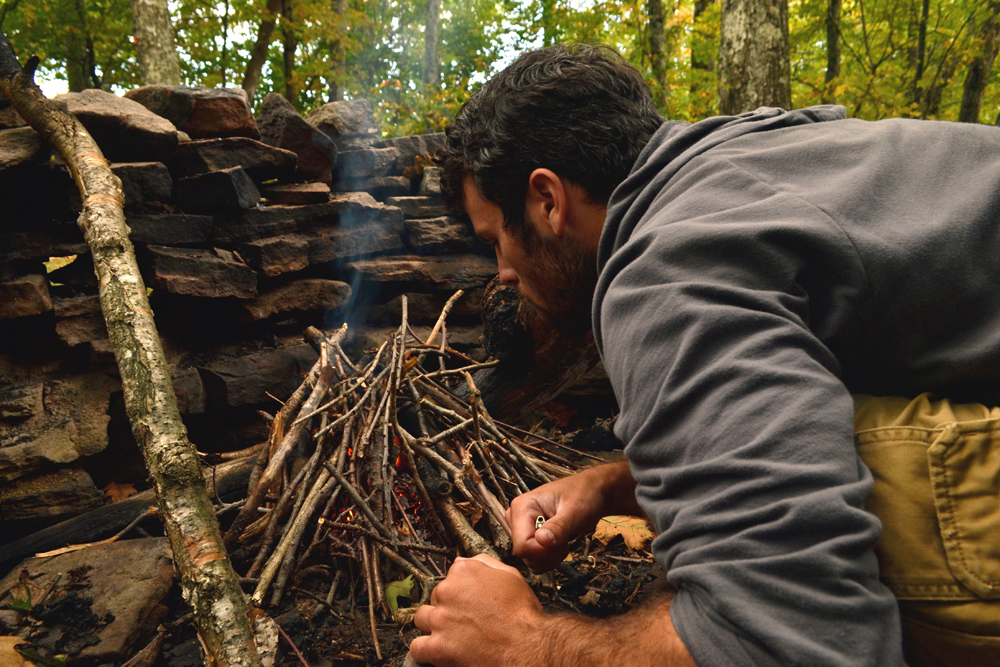 Step One: Gather Your Essentials 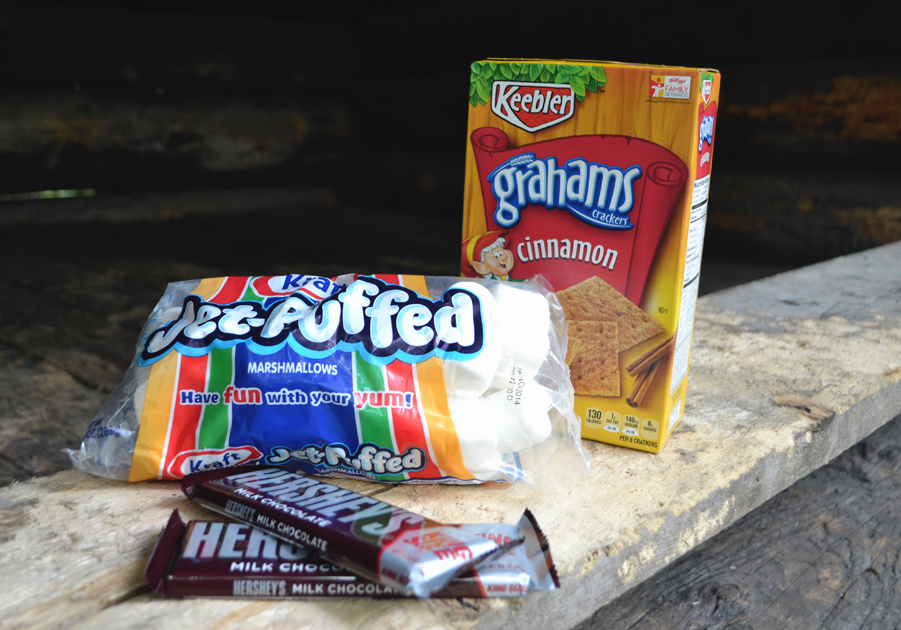 The three ingredients to a s’more are graham crackers, chocolate (preferably Hershey’s), and marshmallows. In addition, you must light a fire and forage for a proper roasting stick (set your eyes on a long and thin twig). Also, if you’re on a diet, forget it. 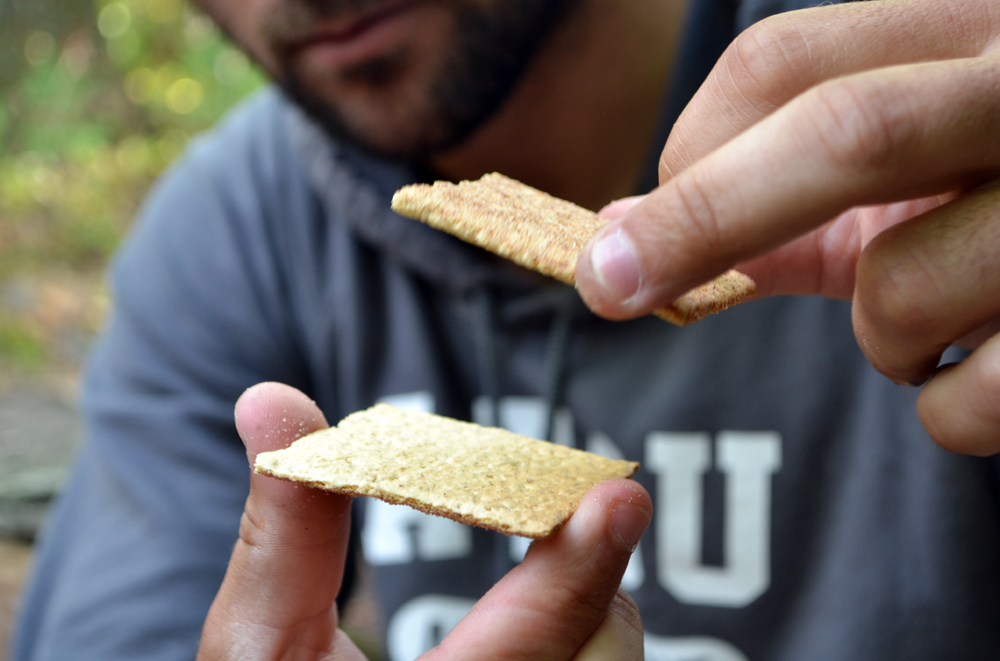 Think of the s’more as the caloric king of sandwiches, with the graham cracker being the bread. Graham crackers come perforated, so splitting them in the middle is easy — in theory. In reality, you might get riled up and break the grahams unevenly. If this happens, eat the flawed cracker and split a new graham. 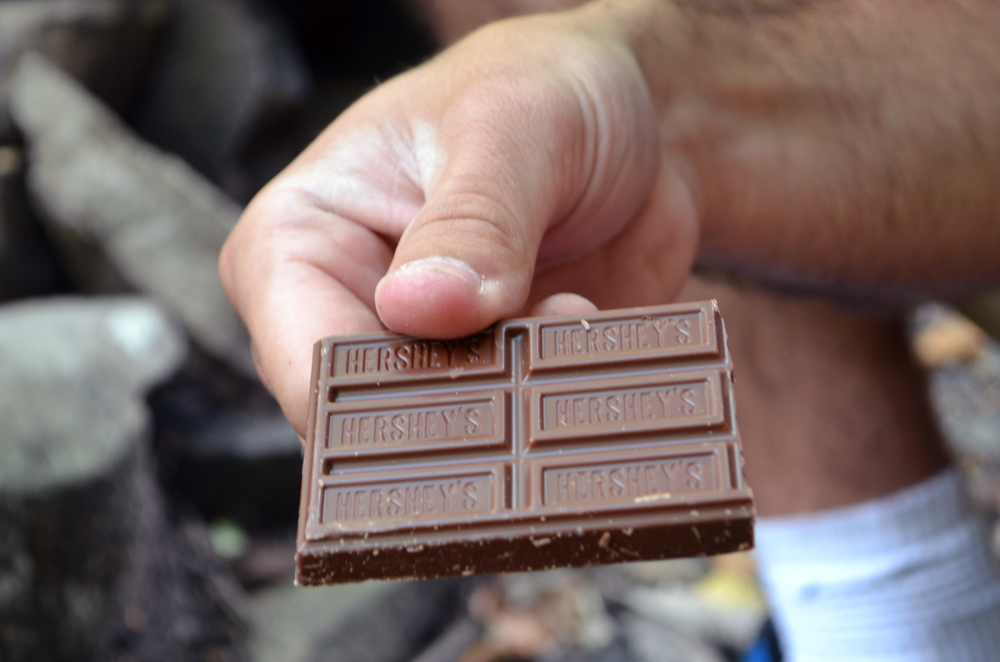 A King Size Hershey’s bar is separated into 12 rectangles, providing enough chocolate for three nicely sized s’mores. Siân admirably opted for a half-bar of chocolate (six rectangles). This was aggressive, but not unusual. In extreme cases a full chocolate bar may be split and made into a double stack. I caution against this, as it could fill you up prematurely and cloud your desire for additional s’mores. 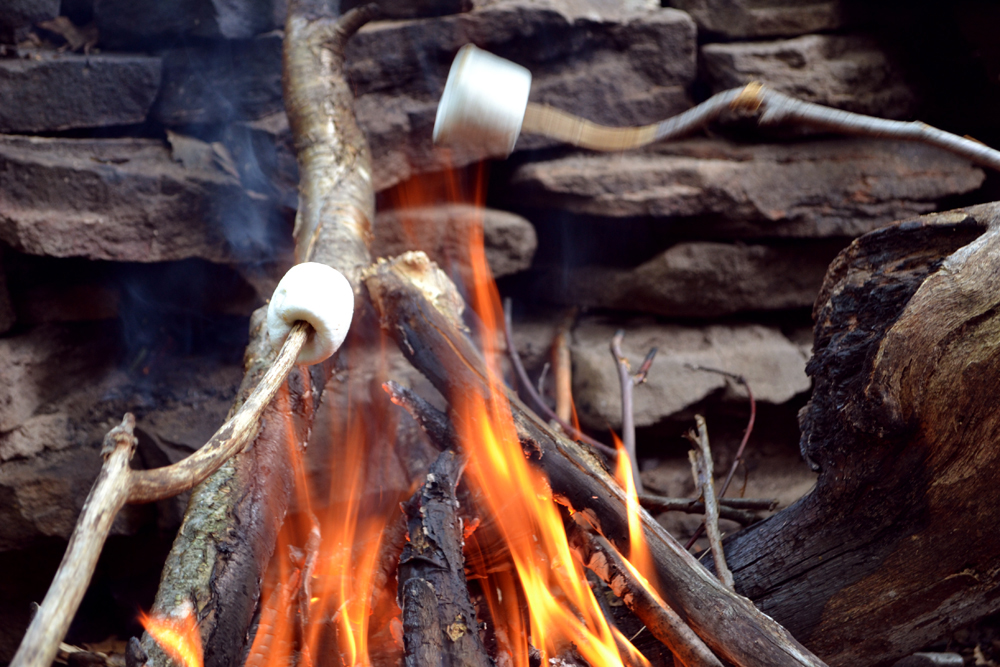 If you foraged properly, you’ve found a nimble stick that can be easily rotated between your thumb, middle and index fingers. Place the white puff ball on the end of it. CAUTION: If you don’t jam the stick far enough into the marshmallow, it can fall off during roasting. 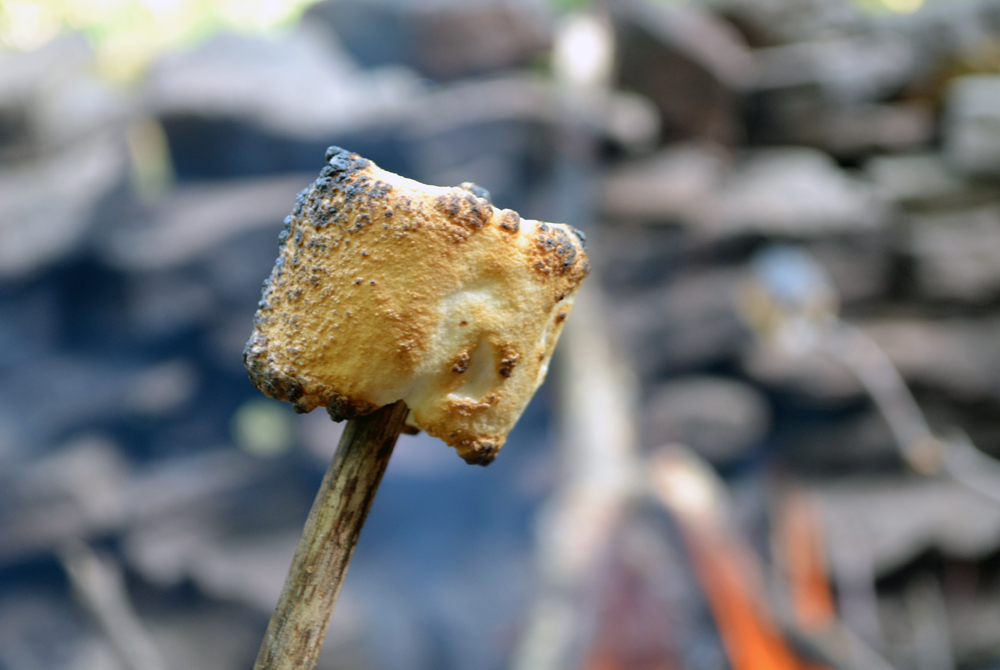 A novice s’moremaker might thrust the marshmallow directly into the fire’s golden heart, eager to make it soft and delectable. Resist temptation and hold it two or three inches from the flame, allowing the heat to soften its core. Wait a few more seconds until the mallow begins to droop slightly and then let the fire crisp the outer layer.

Roast to preferred crispiness, and don’t panic if your mallow goes up in flames. Remember, the heat from the marshmallow should melt your chocolate when you place it between the grahams. 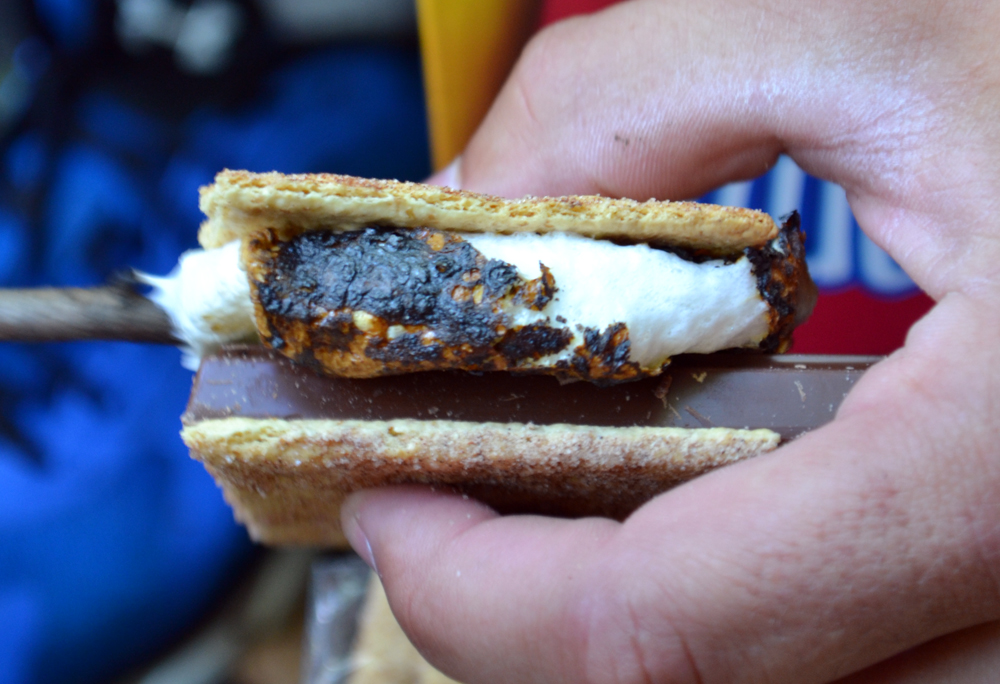 Center the mallow between the chocolate and the grahams. Put light pressure on each side of the s’more and slowly slide the stick out of the mallow’s center. 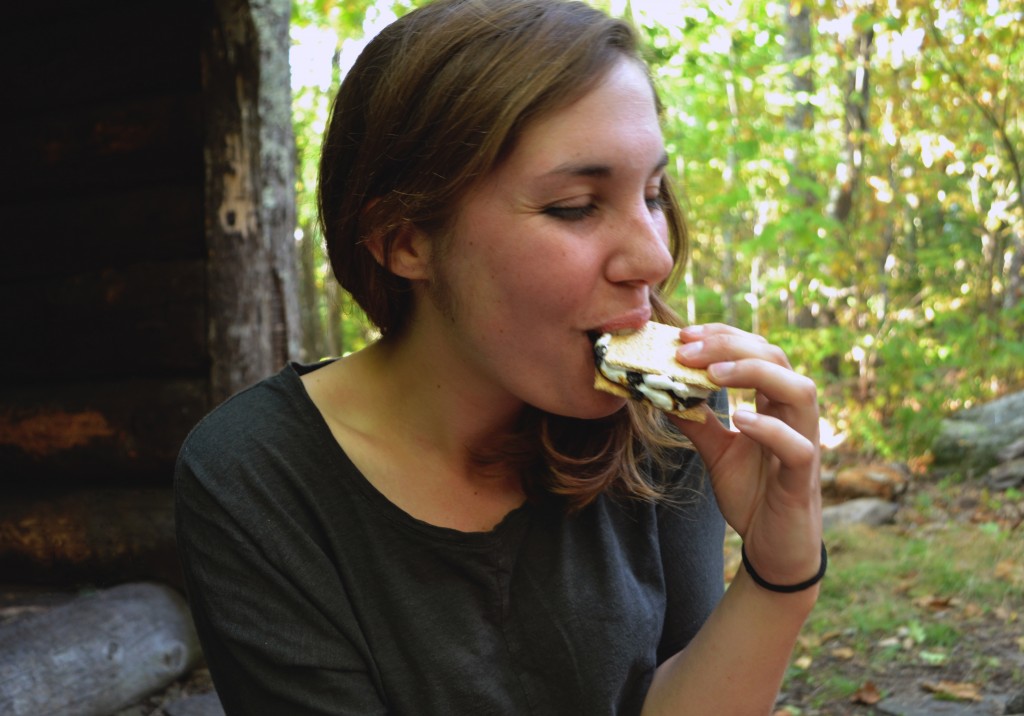 Don’t forget to observe the subtle-yet-overwhelming beauty of your s’more before you embark on your flavorful journey. Savor it. Cherish it. Devour it.

FOR ADDITIONAL STUDY
See this clip from the 1993 film The Sandlot, which properly demonstrates the s’more’s importance in the social lives of a certain sector of young American males.