In September I got a grip on the limestone of Mallorca. Read my story of a magical week free climbing on the coast above the aquamarine ocean and exploring craggy mountain valleys. 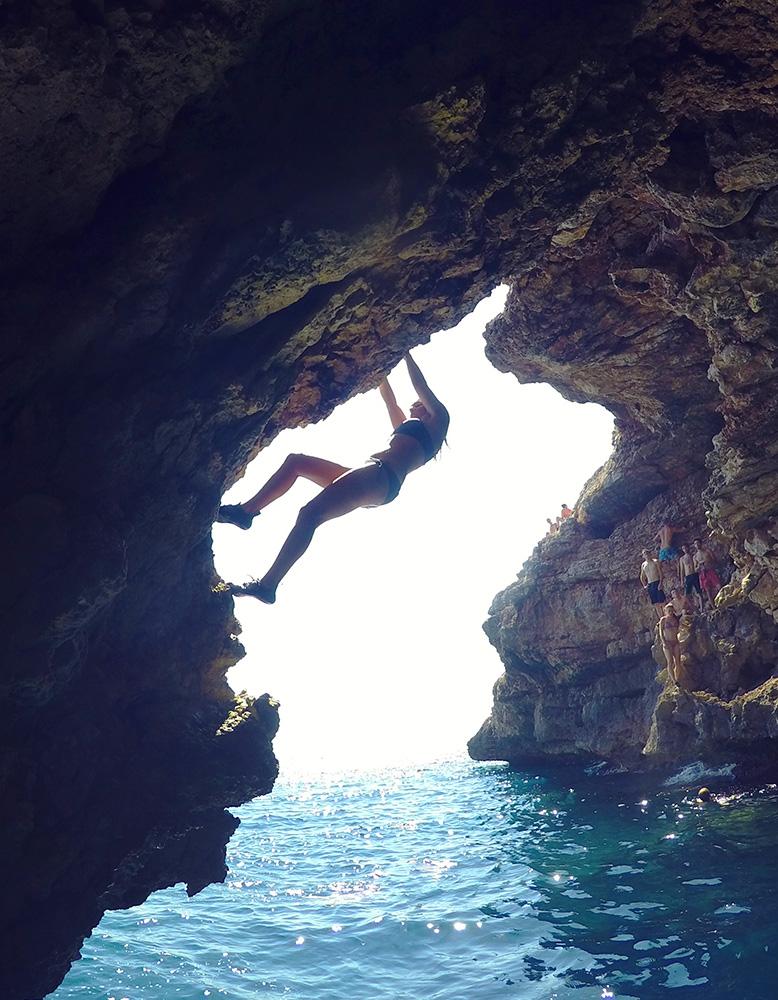 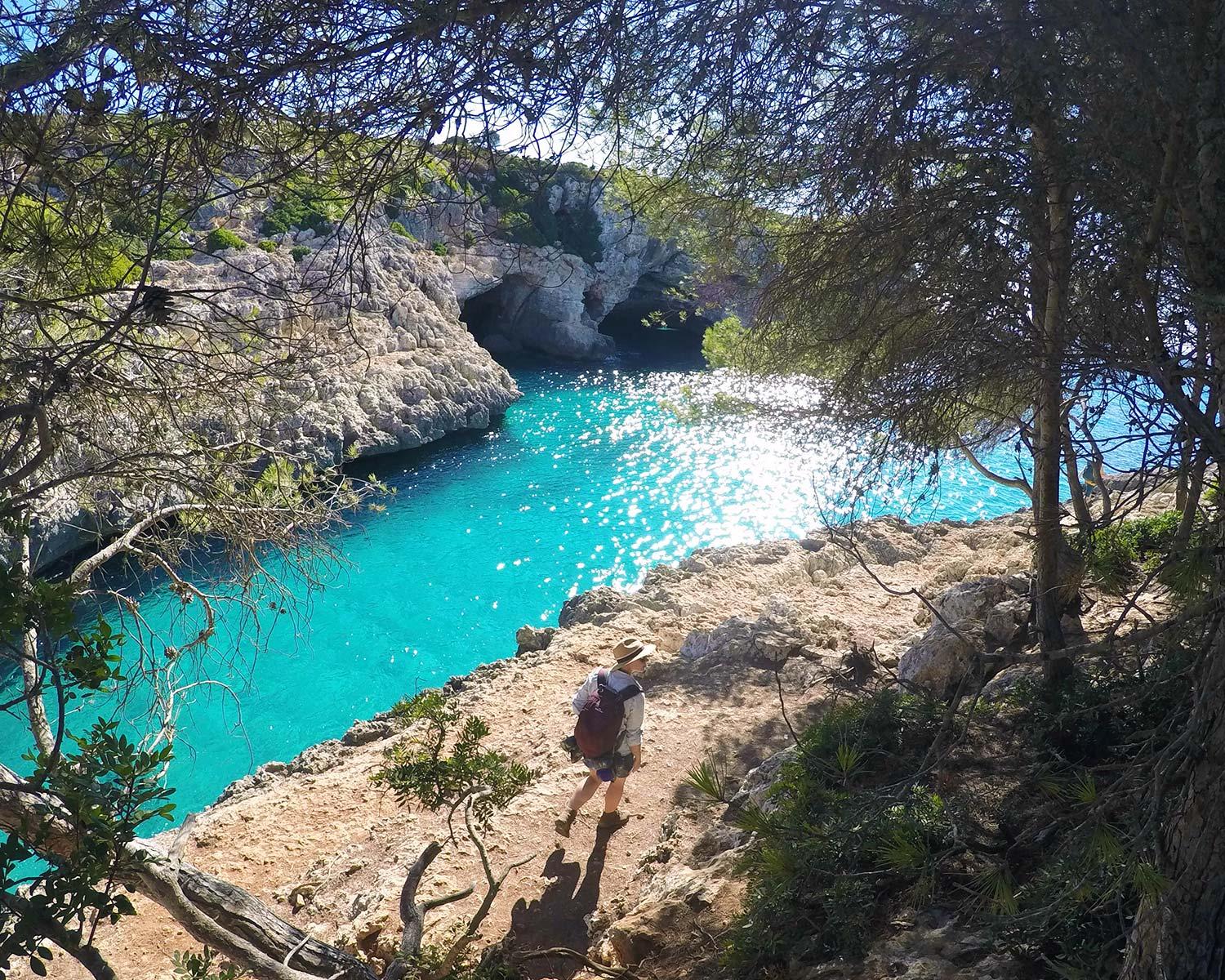 In the height of the summer the island of Mallorca can seem a playground for the rich, a clubber’s delight, a bucket-and-spade holiday hotspot. So far, so soulless. But the arrival of autumn flicks a secret switch – the crowds disperse, the jewel-like coves are empty and the dirt bag climbers begin to arrive, ropes coiled around their rucksacks and a hunger for limestone in their bellies.

Mallorca has become a climbing mecca, and a visit here a rite of passage for lovers of rock. Searching out the best routes quickly takes you into the island’s most remote and beautiful corners, too. Flying into dusty, hectic Palma is inevitable, but then you escape into Mallorca’s wild heart, where craggy mountain peaks and vertiginous cliff faces are yours for the taking.

We began our pilgrimage gently, starting with sport routes in the quiet interior of the island. The most awe-inspiring is the enormous amphitheatre of stone of Sa Gubia, a crag which the faithful must seek out by walking up a mile of dry riverbed. In the valley, walls streaked red and orange rise up high on either side and bizarre tufa rock formations rear out from the stone. The crag boasts over 100 lines, christened with the odd and often hilarious names that all climbing routes bear. We escaped from the heat of the day at the Paret Dels Coloms wall, full of fun 5c-7b routes grouped on either side of an enormous, teardrop-shaped cave. There’s one climb, naughtily named ‘Come Chochos’, which snakes right into the grotto. I’ll leave you to Google Translate that one.

The mountains may be calling, but for most climbers, the irresistible pull to Mallorca is the chance to deep-water solo on the coast. The discipline that was born here is, I think, free climbing at its most beautiful. To deep-water solo you climb in nothing but a swimming costume and climbing shoes, scaling coastal cliffs with just the ocean below you. If you fall, you simply plummet into the water. If you’re a confident swimmer it’s a pretty safe way to climb at lower levels, but DWS still poses a mental challenge for anyone who’s never cast off the shackles of a harness and rope before (fittingly, deep-water soloing is called ‘psicobloc’ in Spanish). Back in the 1970s, when the climbing pioneers of Yosemite were exploring the concept of solo climbing in the USA, Miquel Riera and his friends were using the ocean as a crash pad around Porto Pi. DWS heroes such as Chris Sharma now regularly train in Mallorca, and we were in awe watching some of the seasoned locals casually scaling up an enormous rock face, so high above the sea that to fall at the wrong moment would be like smacking into solid rock.

I left the higher DWS to the better boulderers and spent my time climbing along lower routes such as the 6a beachside traverse at Cala Sa Nau, which snakes along the cliffs a steady four or five metres above the water. With no fear, it’s a simple joy to climb fluidly along the rock, leaving a succession of chalky marks behind you. When your fingers can’t take it any more there’s something very liberating in simply letting go and fall back into the clear water.

On the last day we headed to Cala Barques, a favourite Mallorcan DWS spot in the north of the island. Round to the left of the main beach is a little cove which only climbers seem to frequent. Entering the bay feels like someone turned the saturation way up – the rock is a brick-like orange, the pines a deep velvety green and the sea a shade of cyan so bright that jumping in is like diving into a can of paint. After we’d scrambled around on the cliffs and inside the caves we strung my slack line across the narrow bay and tried wobbling above the crystalline water. Far above us, bare-chested boys were daring each other to jump off the terrifyingly 15 metre cliff they’d just hauled themselves to the top of. We watched as they mustered up their courage and leapt out into the void, falling in a cloud of chalk and emerging from the water like flapping fish, high on adrenaline. When dusk began to fall it was a wrench to leave such a perfect place.

“Majorca is a paradise, if you can stand it”, wrote American poet Gertrude Stein in 1929. I doubt she was referring to the notoriously tough route grading, or the blade-sharp limestone that leaves you with bleeding fingers and scabby legs after a week of scrambling. But she wasn’t wrong about the sense travellers will find of discovering an Eden.

Heading on a climbing adventure? Pack all my favourite kit.